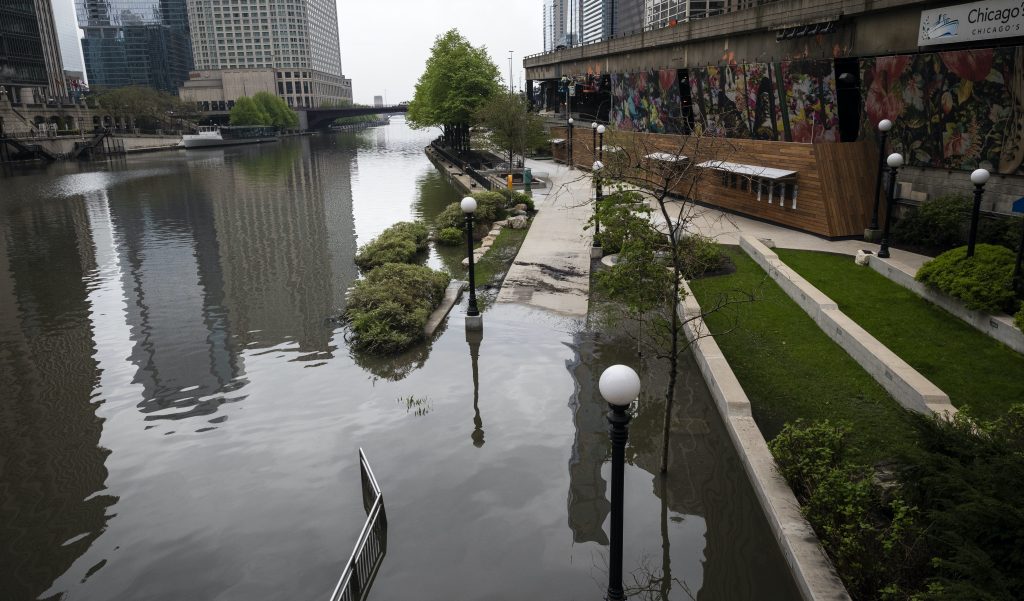 People living along two mid-Michigan lakes and parts of a river were evacuated Tuesday following several days of heavy rain that produced flooding and put pressure on dams in the area.

Two Midland-area schools were opened for evacuees, and more than 50 roads have been closed. The evacuations in Michigan followed days of heavy rains in parts of the Midwest that also brought flooding to Chicago and other parts of Illinois, as well as Ohio and other states.

“The water is very high,” said Catherine Sias, who lives about a mile from one of the dams located in Edenville, Michigan. “Last night, emergency responders came door-to-door to make sure everybody got out. We have mild flooding every year, but this is unusual.”

Sias, 45, has five cats and two dogs and was about to check into a hotel that allowed pets when she learned it was probably safe for people not living in low-lying areas to return home.

“I’m on the high bank, about 20 feet up,” she said. “A lot of people are having a harder time. Most of them are going to be dealing with flooding in their homes.”

Some residents, like Jon St. Croix, went to shelters set up in area schools.

“We were lying in bed when I heard sirens,” St. Croix told the Midland Daily News. “A fire truck was driving around, broadcasting that (we needed) to evacuate. It’s a scary thing — you’re sleeping and awake to sirens.”

St. Croix, 62, his wife and a next-door neighbor were among more than a dozen people sheltering in one school. Their home was not flooded, but St. Croix said he had seen flooding in the area.

Volunteers at the schools said about 120 vehicles were in the parking lots of a couple of schools and about 30 people had been staying on cots inside, according to WNEM-TV.

About a dozen people hunkered down overnight at a school in Sanford but had left by early Tuesday afternoon, said Tom Restgate, an American Red Cross safety officer.

The cots inside the school were spread out to observe social distancing recommendations to fight the spread of the COVID-19 virus, Restgate said.

Heavy rains also caused flooding in parts of northwestern Indiana, including Crown Point — the Lake County seat — where about seven inches fell over the weekend.

Floodwaters swelled quickly on Sunday when 1 inch of rain fell within 15 minutes, swamping streets and sending water into basements and homes, including Mayor David Uran’s residence.

Those waters receded Monday, but Uran and many other residents were continuing to clean up the watery mess on Tuesday, said Uran’s chief of staff, Greg Falkowski.

“He got between two and three feet in his basement, so that’s what he’s working on right now,” Falkowski said Tuesday afternoon.

In Chicago, water that flooded some areas downtown was receding on Tuesday, but Larry Langford, a fire department spokesman, said that he did not expect power to be restored at the iconic Willis Tower for days because the rains caused the building’s subbasements to fill with as much as 25 feet of water. The building was closed to tenants and visitors.

And in DuPage County, west of the city, a search for an 18-year-old woman who was swept away by a surging DuPage River last Friday remained suspended on Tuesday because the water remained too high and the current too swift to conduct the search safely.

Tony Martinez, spokesman for the DuPage Forest Preserve District, said the area of the river where the woman was swept that is typically about 25 feet wide remained 200 yards wide.

“We hope to resume searching later this week,” he said.

The driver of a pickup truck in mid-Michigan had to be rescued by first responders after the vehicle was swept away on a flooded road in Tittabawassee Township, WNEM-TV reported.

School buses and dump trucks were called out Tuesday in southwest Ohio to help evacuate people trapped in flooded areas in a commercial area with dozens of businesses in suburban West Chester Township.

By noon, West Chester Township spokeswoman Barb Wilson said a dozen people had been taken to a nearby high school, while other people were able to make it out of the flooded area in their own vehicles.

There were no injuries reported immediately in the area just off Interstate 75 north of Cincinnati.

Flood warnings in Michigan were issued following widespread rainfall of up to 4 inches since Sunday, according to the National Weather Service. Heavy runoff pushed rivers higher.

“A lot of the rainfall came and hit the Saginaw Valley over the last 48 hours,” meteorologist Andrew Arnold said Tuesday morning. “For the most part, the rain is over.”

The weather system was moving into Indiana, Ohio, parts of Illinois and the Tennessee Valley, Arnold said.

More flooding was forecast for parts of the Tittabawassee River, which was at 26.5 feet Tuesday morning. It was expected to crest Wednesday morning at about 30 feet. Flood stage is 24 feet.

Midland County 911 sent out a series of alerts saying the Edenville and Sanford dams were at risk of failing, and those living near Sanford Lake, Wixom Lake and other area waterways should evacuate.

Midland County Emergency Management later said that the dams were “structurally sound.” It said water flowing through the dam spill gates couldn’t be controlled, however, so evacuation measures remained in place.

In 2018, the Federal Energy Regulatory Commission revoked the license of the company that operated the Edenville Dam due to non-compliance issues that included spillway capacity and the inability to pass the most severe flood reasonably possible in the area.

The Edenville Dam was rated in unsatisfactory condition in 2018 by the state, while the Sanford Dam received a fair condition rating.

Both dams are in the process of being sold.

There were 19 high hazard dams in unsatisfactory or poor condition in Michigan in 2018, ranking 20th among the 45 states and Puerto Rico for which The Associated Press obtained condition assessments.

Just to the north in Gladwin County, the weather service issued a flash flood warning for the Cedar River below the Chappel Dam. And other parts of the state saw isolated flooding following heavy rains in recent days.