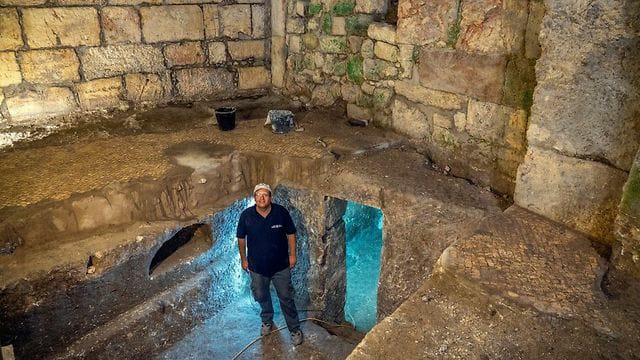 An underground complex carved out of rock that dates back to the Second Beis Hamikdash era has recently been excavated at the foot of a 1,400-year-old building near the Kosel. On Tuesday, the Israel Antiquities Authority and the Western Wall Heritage Foundation presented the first images of the complex, which is located beneath the entrance lobby to the Kosel Tunnels site.

Archaeologists said this was the first time a complex of this type has been discovered near the Kosel.

The rare discovery sheds light on Jewish life in the city ahead of the destruction of the Second Beis Hamikdash, as explained in a joint announcement by the Israel Antiquities Authority and the Western Wall Heritage Foundation.

The complex features two rooms and an open courtyard and contained several everyday objects. The researchers suggested several possible purposes for the spaces, from food storage to a residential place.

The structure was sealed later in the Byzantine period under the floors of a large building about 1,400 years ago and was left untouched for centuries.

“This is a unique finding,” said Dr. Barak Monnickendam-Givon and Tehila Sadiel, directors of the excavation on behalf of the Israel Antiquities Authority. “This is the first time a subterranean system has been uncovered adjacent to the Kosel. You must understand that 2,000 years ago in Yerushalayim, like today, it was customary to build out of stone. The question is, why were such efforts and resources invested in hewing rooms underground in the hard bedrock?

“The wealth of finds being discovered in the dig gives us a glimpse into the day-to-day lives of the residents of the ancient city. Among other things, we found cooking vessels made out of refined clay; dozens of oil lamps made of clay; a stone mug and a fragment of a vessel used to cleanse the hands and hold water that was used for some of the rituals of taharah in the time of the Beis Mikdash,” Monnickendam-Givon said.

“I am excited, ahead of Yom Yerushalayim, to reveal to the Jewish nation a new treasure trove of impressive and fascinating findings that shed light on life in Yerushalayim throughout the generations in general, and on the eve of the destruction in particular,” commented Mordechai Eliav, Director of the Western Wall Heritage Foundation. “This finding epitomizes the deep connection of Jews with Yerushalayim. Even when there were physical limitations, prayer at the foot of the remnant of the Beis Mikdash never ceased, and this is tangible evidence of this.”