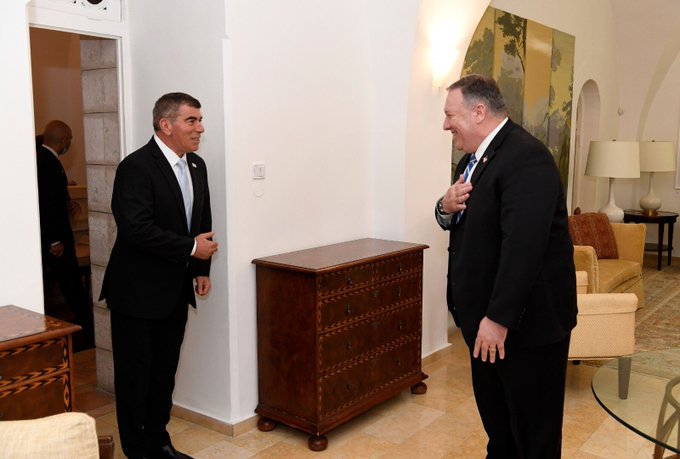 Outgoing Foreign Minister Yisrael Katz and incoming Foreign Minister Gabi Ashkenazi held a change of the guard ceremony at the Foreign Ministry on Monday morning, attended by the office’s executive director and members of the ministry. Israeli ambassadors around the world and foreign service officials also watched the ceremony.

Incoming Foreign Minister Gabi Ashkenazi said that Israel is facing significant regional opportunities in the new tenure. “First and foremost,” he noted, “is President Trump’s Peace Initiative. I see a significant milestone plan. President Trump presents a historic opportunity for us to shape the future of the State of Israel for decades to come.

“The plan will be promoted responsibly and in coordination with the United States, while maintaining the peace agreements and strategic interests of the State of Israel.

“The United States is Israel’s closest ally. I thank the U.S. government for its firm standing with Israel in curbing the Iranian nuclear project, and Iran’s establishment within our borders.

“The political campaign to stop the Iranian threat has been and still is our main mission. Of course, we must continue to use all the tools available to us on the diplomatic plane alongside the security activity.

“Like military power, peace with our neighbors is also a strategic asset and we must seek to maintain it. I see great importance in strengthening strategic ties with the peace states, Egypt and Jordan. They are very important allies in dealing with the challenges in the region. In addition, I will work to promote contacts and cooperation with other countries in the area, in order to strengthen the strategic position of the State of Israel.”

Ashkenazi’s remarks refer to the Trump plan calling for Israel to annex parts of Yehudah and Shomron, and is the first comment by a senior Blue and White MK on the matter in recent weeks, as Prime Minister Binyamin Netanyahu continues to say that Israel will apply sovereignty to those areas soon. The coalition agreement between Likud and Blue and White states that Netanyahu can bring sovereignty to a vote on July 1 at the earliest.