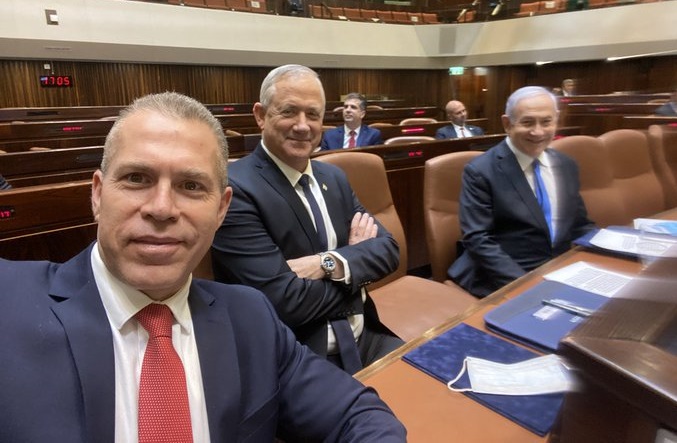 Among the first questions to confront the unity government aimed at coping with the coronavirus crisis on Sunday was: How to hold the inaugural photo-op without breaking Health Ministry regulations?

A statement released by Beit HaNasi, the President’s Residence, said, “The photograph of the new government will be taken in accordance with the instructions of the Ministry of Health when possible [italics added].”

“This is an important ceremonial event that comes after the formation of every Israeli government and we hope to hold it in exactly the same way,” wrote Tubi to Bar-Siman-Tov.

He noted, “The event includes 36 ministers, the president and two prime ministers in rotation, all together for the photograph in the hall of Beit HaNasi, with a large number of media,” a group picture which challenged the principle of social distancing.

At the swearing-in on Sunday, Likud MK Gilad Erdan took a selfie with PM Netanyahu and PM-in-waiting Gantz.

The selfie, posted on Twitter, showed them with seats between them, but without masks.

Erdan, the outgoing public security minister, has been nominated by PM Netanyahu to serve as Israel’s ambassador to the U.S. and U.N.