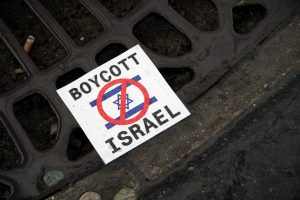 Missouri lawmakers on Thursday passed a bill to ban the state from doing business with companies that boycott Israel.
The GOP-led House approved the measure 95-40 on Thursday, the day before their Friday deadline to pass bills this year.

Lawmakers are rushing to pass as many bills as possible after taking several weeks off over concerns about spreading the coronavirus. They returned to the Capitol days before Gov. Mike Parson’s statewide stay-at-home order expired May 3.

The boycott bill is in response to a Palestinian-led boycott movement against Israel.

The BDS movement promotes boycotts, divestment and sanctions of Israeli institutions and businesses in what it says is a nonviolent campaign against Israeli abuses against Palestinians. Israel says the campaign masks a deeper goal of delegitimizing and even destroying the country.

The Missouri bill would require companies to sign a contract pledging not to boycott Israel in order to do business with Missouri. It wouldn’t apply to contracts worth less than $100,000 or companies with fewer than 10 employees.

At least 27 other states have passed similar policies, according to the National Conference of State Legislatures.

Republican Rep. Holly Rehder led the Senate bill through the House. She said doing anything to support the boycott movement goes against Missouri’s economic policies and would be “absurd.”

“The legislature has taken bold action to combat the insidious and hateful BDS movement that singles out Israel and encourages punitive actions against its economy and citizens, said Nancy Lisker, director of the American Jewish Committee St. Louis Region.

The legislation against boycotting Israel was one of several policies lawmakers approved Thursday in their rush to pass as many bills as possible before their Friday deadline.