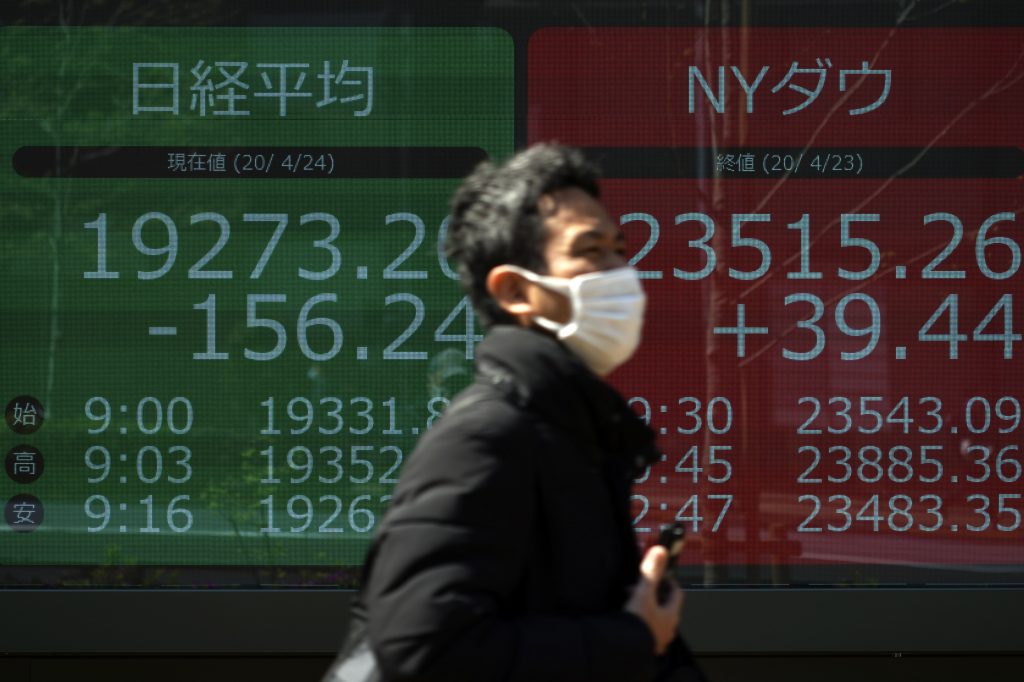 Asian shares were mostly higher Friday after meandering on news about economies reopening, mixed with worries about the prolonged health risks from the new coronavirus.

“Bright spots in the markets and the economy should not breed complacency about being out of the woods,” Riki Ogawa of Mizuho Bank said. “Fact is, even as economies prepare to emerge from varying degrees of lockdown, restoration of ‘normalcy’ is a much longer road.”

Parts of Japan are gradually easing requests for people to stay home and for some businesses to stay closed, while worries deepen over case numbers rising.

The Keidanren, which represents more than 1,000 Japanese companies and regional economic groups, released guidelines for safer work, including instructions on having office workers coming into the office just three days each week to minimize commutes, and adapting workplaces for social distancing.

Overnight, Wall Street rallied back from a sharp morning drop.

The S&P 500 climbed 1.2% to 2,852.20 in another scattershot day of trading, with many stocks flipping from the bottom of the leaderboard to the top following a few sharp reversals in momentum.

Wall Street has been wavering for weeks as it digests gargantuan moves the market made earlier this year, first down more than 30% on worries over the coming recession and then up more than 30% on hopes for a relatively quick rebound.

Trading has been particularly erratic this week, as investors rethink bets that the reopening of economies around the world will allow for a relatively quick return of growth. Another possible flare-up in tensions between the world’s largest economies is also hitting markets, with comments from President Donald Trump Thursday about China further weighing on them.

Thursday’s turnaround was powered in large part by a rally for stocks that have been pummeled for much of this year: banks’ stocks.

Financial stocks in the S&P 500 jumped 2.6% for the biggest gain among the 11 sectors that make up the index. Wells Fargo rose 6.8%, and Bank of America added 4%. Through much of this year, investors have sold bank stocks on worries that low interest rates and the severe recession will mean less profit for making loans.

Before the recession hit, U.S. stocks quickly lost just over a third of their value as investors anticipated an avalanche of layoffs hitting the economy. Those fears have turned out to be true, and a report on Thursday showed that nearly 3 million U.S. workers filed for unemployment benefits. That brings the total to roughly 36 million in the two months since the pandemic caused widespread orders for people to stay at home and businesses to shut down.

But stocks began climbing in late March after massive amounts of aid promised by the Federal Reserve and Capitol Hill convinced markets that the worst-case scenario of a financial crisis wouldn’t be happening.

Many professional investors have warned that the rally has been overdone, given how much uncertainty exists about how long the recession will last.

Recently, worries about renewed U.S.-China tensions have also weighed on markets. A bruising trade war between the two had dragged on the global economy before the pandemic hit.

“We have all the challenges internally with the economy being shut down, but us getting into a conflict with China adds an additional dimension of uncertainty,” said Mark Hackett, chief of investment research at Nationwide.

The yield on the 10-year Treasury was steady at 0.62%. It tends to fall when investors are downgrading their expectations for the economy and inflation.