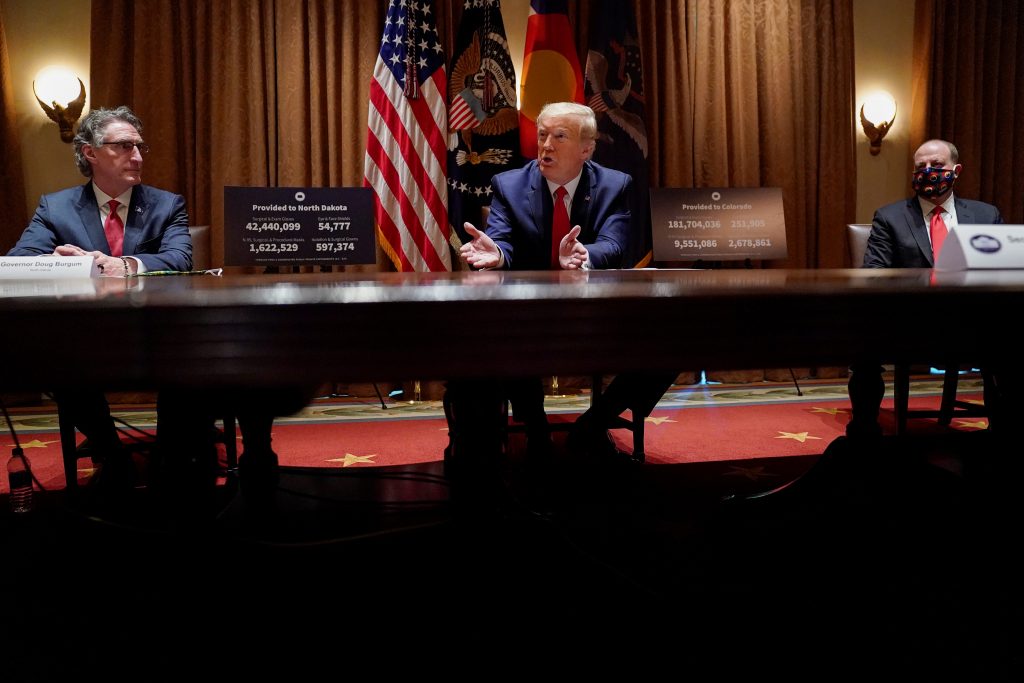 President Donald Trump says the coronavirus pandemic highlights the importance of U.S. manufacturing and moving supply chains out of China, as he blamed that country anew for not doing enough to slow the pandemic.

“These stupid supply chains that are all over the world — we have a supply chain where they’re made in all different parts of the world,” PresidentTrump said in an interview with Fox Business’ Maria Bartiromo that aired Thursday. “And one little piece of the world goes bad and the whole thing is messed up.”

“We should have them all in the United States,” he added.

Trump’s comments came before he travels to Allentown, Pennsylvania Thursday to highlight a U.S. medical equipment distributor that is contributing to the effort to manufacture and ship personal protective gear across the country to help with the coronavirus response. It’s his second trip in as many weeks as he tries to convince the American public that it’s time for states to begin to reopen, even as the virus continues to spread.

Trump will tour Owens and Minor Inc., which the White House says has sent millions of N95 masks, surgical gowns and gloves to hospitals across the country.

Trump in his remarks is expected to discuss efforts to use the Strategic National Stockpile for coronavirus testing, as well as efforts to “replenish and bolster the stockpile so that the America is never caught off guard again,” the White House said.

Owens & Minor says it has implemented new procedures because of the virus, including restricting visitors to its distribution and manufacturing facilities to “business critical service and suppliers,” and requiring employees to wear personal protective equipment and undergo temperature checks.

The state also has put masking and social distancing requirements in place for all businesses that are allowed to operate — requirements that apply to employees, customers and visitors, unless that business meets a narrow exception in the governor’s order.

Pennsylvania’s Democratic Gov. Tom Wolf is under increasing pressure to roll back coronavirus restrictions after effectively containing the state’s outbreak early on, battling a Republican revolt over his stay-at-home orders and business shutdowns. Counties have threatened to defy his orders while at least a few business owners have re-opened their doors despite his warnings.

Around 2 million people in Pennsylvania have lost their jobs since mid-March, with food and milk giveaways drawing lines miles long. Meanwhile, some of the out-of-work have gone two months without money because of the state’s problem-plagued online unemployment benefits portal.

Allentown, with highways connecting it to New Jersey and New York City, has become one of Pennsylvania’s coronavirus hot spots.

Wedged between Philadelphia’s suburbs, Pennsylvania’s anthracite coal country and the eastern border with New Jersey, the Allentown area has been rebounding from the collapse of the steel industry and is growing quickly. It is a politically moderate city that has a higher household income than the rest of Pennsylvania and is attracting more high-end employers.

Trump captured the state by a mere 44,000 votes four years ago. But in a backlash against him, in 2018, the area voted for a Democrat to represent it in Congress for the first time in two decades.

Trump’s campaign has been warily watching the trio of Rust Belt states that carried him to the presidency in 2016. The so-called Blue Wall of Pennsylvania, Michigan and Wisconsin, meant to provide electoral college insurance for Hillary Clinton, all broke for Trump by very slim margins.

Many in the Trump campaign have all but written off Michigan, a state battered by the virus, and whose governor has repeatedly clashed with Trump. But advisers believe Pennsylvania, like Wisconsin, could be captured if the economy rebounds before November.

That may mean pressuring the states’ Democratic governors to ease restrictions on business, travel and public spaces — even if it risks a resurgence of the deadly virus.

Trump’s trip to Allentown will be his 18th visit to the state of Pennsylvania since taking office. The bellwether Lehigh Valley — which saw one of its counties flip from Obama to Trump — will be the focus Thursday of the president’s re-election campaign, particularly as it fears an exodus of women voters in regions elsewhere in the state, including in suburban Philadelphia.

Trump’s campaign has also prioritized rural and exurban voters, and has prepared to blanket the airwaves with attack ads that link Democrat Joe Biden to China. The hope is to tarnish Biden with an association to the country where the pandemic originated and to play up his ties to globalization and trade deals blamed by some for closing factories in regions outside of Pittsburgh.

Top campaign advisers briefed the president late last month that his support had slipped in battleground states, particularly among older people in states with aging populations like Pennsylvania. But advisers believe Trump has begun to reverse that momentum in part due to his attacks on Biden, his harsh anti-China rhetoric and the elimination of his daily briefings, which were blamed for rattling viewers.

Trump’s visit to Allentown will put him about 75 miles from Scranton, where Biden was born. The Democrat’s campaign has become increasingly hopeful of returning Pennsylvania to the blue column, where it had been since 1992 until 2016.

Pennsylvania is 10th among states in overall infection rate — with some 59,000 confirmed cases, or roughly 450 per 100,000 residents, and nearly 4,000 deaths, according to federal statistics.

New infections have been trending down, though, and Wolf has been easing restrictions in lightly affected counties — but not fast enough for some.

Trump, on Monday, weighed in on the intensifying political fight Monday, tweeting: “The great people of Pennsylvania want their freedom now, and they are fully aware of what that entails.”