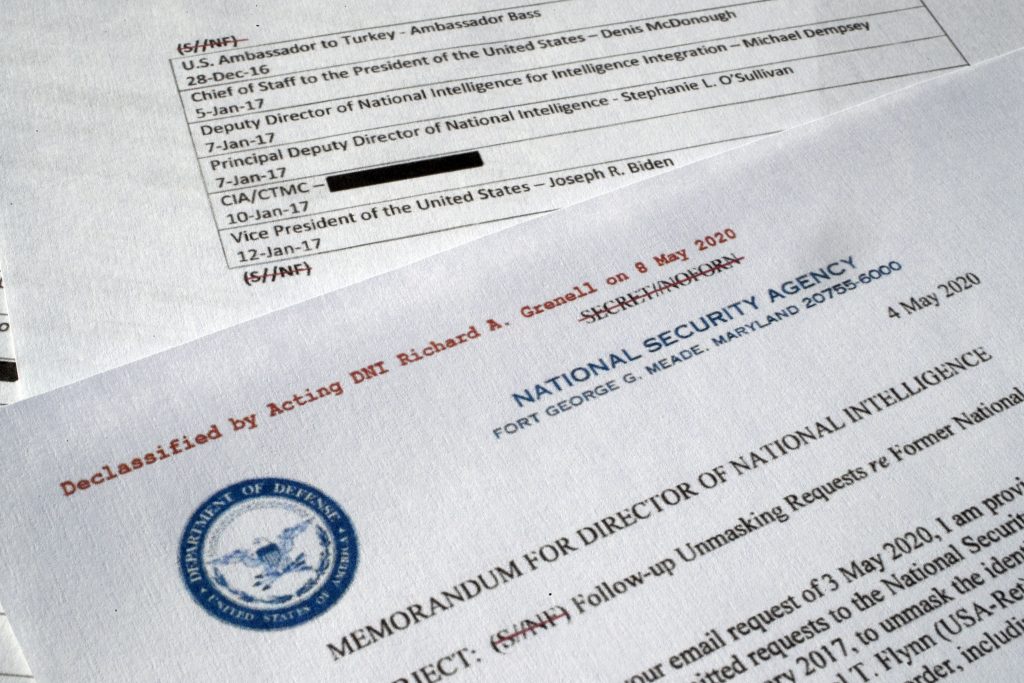 President Donald Trump and some Republicans are launching a broad attack on the foundation of the Russia investigation, including declassifying intelligence information to try to place senior Obama administration officials under scrutiny for routine actions.

The effort has been aided by a Justice Department decision to dismiss its prosecution of former Trump administration national security adviser Michael Flynn, essentially rewriting the narrative of the case in a way that former federal law enforcement officials say downplays the legitimate national security concerns they believe Flynn’s actions raised.

President Trump and his Republican allies are pushing to reframe the Russia investigation as a “deep state” plot to sabotage his administration, setting the stage for a fresh onslaught of attacks on past and present Democratic officials and law enforcement leaders.

Two Republican critics of the Russia investigation, Sens. Chuck Grassley of Iowa and Ron Johnson of Wisconsin, disclosed a list of names of Obama administration officials they say may have received Flynn’s identity from intelligence reports in 2016 and 2017. Among the names is Trump’s Democratic opponent, Joe Biden, who was vice president when the Russia probe began.

Names of Americans are routinely hidden, or minimized, in intelligence reports that describe routine, legal surveillance of foreign targets. U.S. officials must make a specific request if they want to know the person’s identity, or “unmask” them.

“He was one of the unmaskers,” Trump said of Biden in an interview with Fox Business’ Maria Bartiromo, labeling the Russia investigation as “the greatest political crime in the history of our country.”

Trump moved further to lay the blame on his predecessor and would-be replacement. “The president knew everything,” Trump said. “President Obama and Vice President Biden, they knew everything.”

Biden and the other officials had authority to seek the name of the unidentified American in the reports — it turned out to be Flynn — and did so through proper channels, according to Trump administration documents. The release of the information by the president’s allies seems designed to create suspicion around Biden and other senior Democrats as the November election approaches.

Trump hyped the disclosure of the list with Biden’s name as a “massive thing.” But the Biden campaign dismissed the revelation, with spokesman Andrew Bates saying it simply indicates “the breadth and depth of concern across the American government” at the time about Flynn’s conversations with foreign representatives. None of the officials could have known beforehand that the unidentified person in the reports was Flynn, Bates said.

The requests for the information came as U.S. officials were scrutinizing Russian election interference on Trump’s behalf and trying to determine whether Trump associates were involved in that effort.

The issue has been politically charged since early 2017, when it was revealed that Flynn had discussed sanctions during the presidential transition period with Russia’s then-U.S. ambassador, Sergey Kislyak. Flynn later pleaded guilty to lying to the FBI about those talks with Kislyak.

U.S. officials may ask the National Security Agency to disclose to them the names of Americans who are swept up in the surveillance of foreigners and whose identities are concealed in intelligence reports, if they believe the identity is essential in understanding the intelligence — and they do so thousands of times a year.

The list declassified by Richard Grenell, a Trump loyalist and acting national intelligence director, shows a broad range of U.S. officials submitted requests to the NSA between Nov. 8, 2016, and Jan. 31, 2017, to unmask the identity of an American who was revealed to be Flynn, according to a cover letter accompanying the release.

It is unclear if they actually viewed the unmasked information.

Flynn’s call with Russian Ambassador Sergey Kislyak occurred in late December 2016. Many of the requests to unmask his identity took place before then, as well as in the weeks that followed. The content of the intelligence reports was not disclosed.

The highly unusual disclosure comes as Trump has been eager to shift the focus in this election year away from the coronavirus pandemic. He has repeatedly pronounced Flynn “exonerated” and pushed a loosely defined “Obamagate” allegation that the previous administration tried to undermine him during the presidential transition.

He has increasingly lashed out in the year since Mueller’s report, which identified substantial contacts between Trump associates and Russia but did not accuse him of a crime or allege a criminal conspiracy between his campaign and the Kremlin. Revelations since then have exposed problems in the early days of the FBI’s probe, including errors and omissions in applications to surveil an ex-Trump campaign adviser.

Attorney General William Barr has said dropping the case against Flynn was in the interests of justice. The department says the FBI had insufficient grounds for interviewing Flynn about his “entirely appropriate” calls with the ambassador and that any imperfect statements he made during the interview weren’t material to the broader counterintelligence investigation into the Trump campaign.

But the decision stunned former law enforcement officials involved in the case, including some who say the Justice Department is rewriting history and omitting key context.

Former FBI Deputy Director Andrew McCabe said the FBI was obligated to interview Flynn about his conversations with Kislyak, and that Flynn’s lies compounded the bureau’s concerns.

And because White House officials were inaccurately asserting that Flynn had never discussed sanctions with Kislyak, U.S. officials were concerned Flynn could be vulnerable to blackmail since Russia also knew what was discussed.

U.S. District Judge Emmet Sullivan has yet to rule on the Justice Department’s dismissal request and has indicated he is not inclined to do so swiftly.