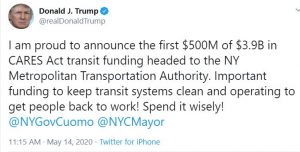 President Trump tweeted this morning that the New York City Metropolitan Transportation Authority (MTA) will receive the first funding from the CARES Act, totaling $3.9 Billion. “I am proud to announce the first $500M of $3.9B in CARES Act transit funding headed to the NY Metropolitan Transportation Authority. Important funding to keep transit systems clean and operating to get people back to work!” the president tweeted. Trump ended with an admonishment, “Spend it wisely!”

In his daily coronavirus news conference, Governor Cuomo mentioned that he had asked President Trump to expedite the mass transit funding. “The President cut red tape and actually sent the first installment today,” the governor said, “so I’m grateful for that and I thank him.”

MTA Chairman and CEO Patrick J. Foye discussed the $3.9 billion in federal funding at a Crain’s New York Business panel discussion on the future of New York City transportation and infrastructure. “The most important issue before the MTA right now is federal funding. Our ridership is down 90% plus, subways, LIRR, MNR, and bridge and tunnels is down about 50% the latest number. That’s had a dramatic impact on our revenues.”

Foye explained that roughly half of MTA revenue comes from fares and tolls, with the remaining 50% from dedicated revenue sources. In the first round of CARES funding, the MTA received approximately $3.9 billion. The CEO thanked President Trump for signing that bill into law and for expediting the funding. “We’re gratified for that funding,” he said, “[and] we received the first installment [of $500 million] today.”

The funding was the result of the bipartisan hard work of the New York Congressional delegation, including Democrats Representatives Nita Lowey, the Chairwoman of the House Appropriations Committee, and Representatives Hakeem Jeffries and Adriano Espaillat, and Republican Representatives Peter King and Lee Zeldin.

On Tuesday, May 12, House Speaker Nancy Pelosi released a House bill which appears to be a very favorable bill for the MTA.