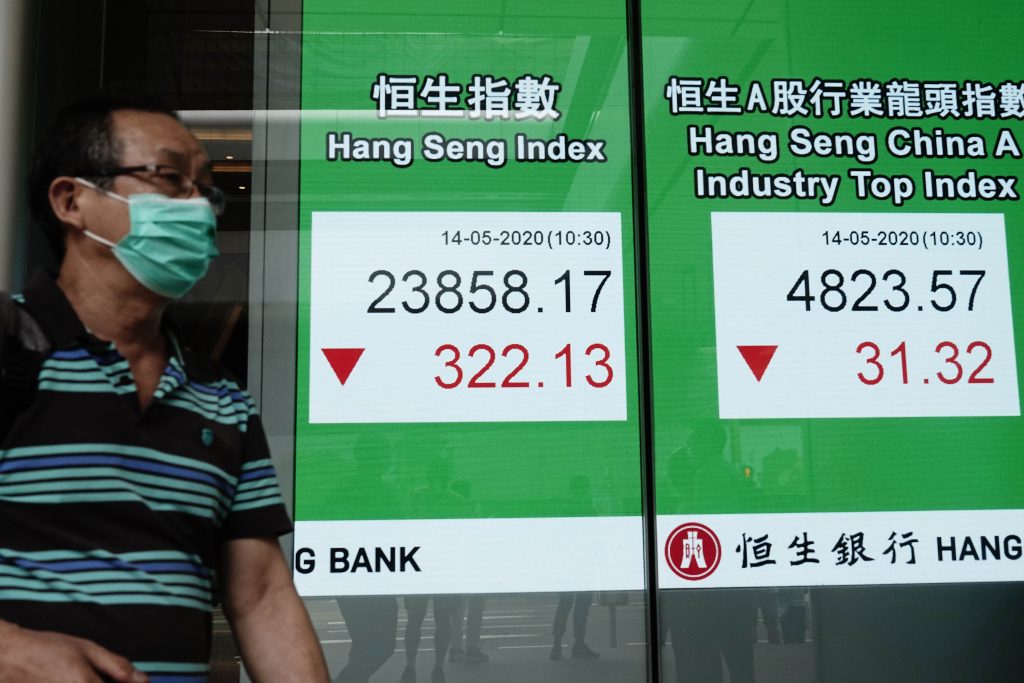 Asian shares declined Thursday on pessimism about life getting back to normal soon amid the coronavirus pandemic, even as Japan prepared to let businesses reopen in some regions.

Stephen Innes, chief global strategist at AxiCorp, said markets were jittery after comments from Federal Reserve Chair Jerome Powell, which set off worries about the risks of corporate failure in the U.S. and job losses.

“The roller coaster recovery continues to be the theme of the week,” Innes said, noting a second wave of COVID-19 infections could be ahead if lockdowns in any part of the world are eased too quickly.

Weighing on investor sentiments was Fed chair Powell’s warning of a prolonged recession. Powell said the U.S. government may need to pump even more aid into the economy, which is bleeding millions of jobs every week.

Japanese government officials were preparing to announce an easing of the nationwide “state of emergency,” which has strongly requested that nonessential workers stay home.

Some regions where infections aren’t spreading too much may get further reopened, although with some social-distancing measures in place.

Japan has so far has reported 678 COVID-19 deaths, but has had no lockdown. Public discontent is brewing, but people are also worried about health risks and whether infections could start rising exponentially, as they did in New York, Brazil and elsewhere.

Prime Minister Shinzo Abe is expected to make an announcement on the changes later in the day, after markets close.

Major Japanese companies, such as Toyota Motor Corp. and Sony Corp., have announced sharp drops in profits as the pandemic took hold, and have not given profit projections, or only gave partial forecasts, for the year through March 2021.

Wall Street indexes suffered after players saw a quick rebound as less likely, with the S&P 500 falling 1.7% Wednesday, to 2,820.00, for its second straight loss. The biggest hits targeted companies that most need a healthy economy for their profits to grow.

”At this stage now, we think there are more risks to the downside than the upside,” said Liz Ann Sonders, chief investment strategist at Charles Schwab.

”Consumers in general are going to be more wary and more interested in boosting savings rates and are unlikely to come back to a world of consumption anywhere near what it looked like before,” she said.

It’s the latest wobble for a market that has been wavering in recent weeks after coming off its best month in a generation. The S&P 500’s 26% rally got going in late March following promises of massive aid from the Federal Reserve and Capitol Hill. It then accelerated on optimism as several countries and U.S. states began relaxing restrictions on businesses that were meant to slow the spread of the coronavirus but also caused a severe recession.

Many professional investors have been skeptical of the rally, though, saying it was overdone given how much uncertainty exists about how long the recession will last.

Analysts say they expect the market to remain in a wait-and-see approach for weeks as investors gauge how economic reopenings underway are going. Investors want to see if second waves of coronavirus infections occur if governments lift their restrictions on businesses too soon. Another possible flare-up in trade tensions between the United States and China has also recently weighed on markets around the world.

U.S. benchmark crude gained 31 cents to $25.60 a barrel in electronic trading on the New York Mercantile Exchange. It fell 65 cents to $25.68 on Wednesday. Brent crude, the international standard, rose 30 cents to $29.49 a barrel.