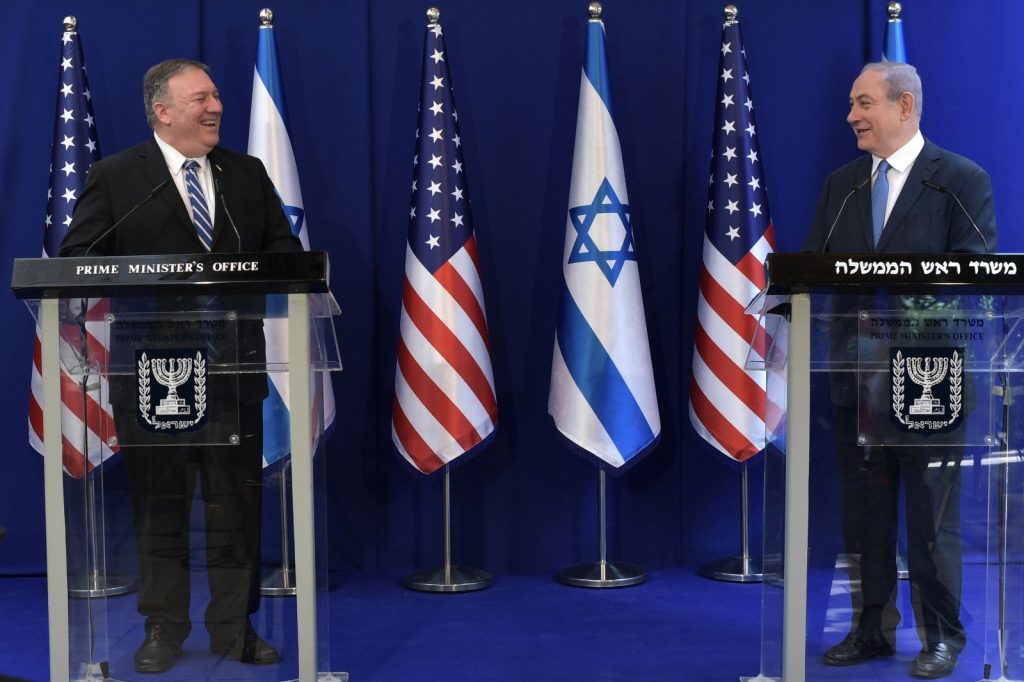 U.S. Secretary of State Mike Pompeo praised Israel on Wednesday for sharing information during global efforts to combat the coronavirus pandemic and took another swipe at China over what he said was its lack of transparency.

President Donald Trump and his senior officials have engaged in a war of words with China, where the new coronavirus first emerged, saying it failed to inform the world fast enough about the dangers it posed and muzzled those who raised the alarm. Beijing strongly denies the charges.

Arriving in Israel on a one-day visit, Pompeo told Prime Minister Binyamin Netanyahu, “You’re a great partner, you share information – unlike some other countries that try and obfuscate and hide that information – and we’ll talk about that country, too.”

Pompeo did not name China and did not give specific examples of Israeli cooperation in the fight against coronavirus.

Earlier, Pompeo repeated Washington’s charges against Beijing in an interview for the Yisrael Hayom newspaper.

“Here is what we know for sure. The virus originated in Wuhan, China. The Chinese Communist Party knew about this virus in December of 2019 [and] attempted to obfuscate this.

“They denied people the ability to talk, they didn’t share this information quickly enough, they created enormous risk for the world,” he said.

The United States has previously cautioned Israel against potential security threats from Chinese investment in Israel, prompting the Netanyahu government to set up a committee last October to vet such projects.

Israel moved aggressively and early against the pandemic, shutting its borders in mid-March as part of measures that Netanyahu said had been discussed with the White House.

Pompeo was to meet later with Benny Gantz, Netanyahu’s political rival turned designated coalition partner. The two are scheduled to swear in their new government on Thursday.

On their agenda has been a proposed declaration of Israeli sovereignty over communities in Yehudah and Shomron and the Jordan Valley.

The Palestinians are boycotting the Trump administration over its perceived pro-Israel bias, but Pompeo said he would discuss Washington’s peace vision with Netanyahu.

“There remains work yet to do and we need to make progress on that – I’m looking forward to it,” Pompeo said.

Pompeo landed in Israel early in the morning, donning a red, white and blue face mask, and proceeded directly to Yerushalayim, receiving an exemption from Israel’s mandatory two-week quarantine for arrivals due to the coronavirus outbreak. His visit is the first to Israel by any foreign official since January, before the country largely shut its borders to halt the spread of the pandemic.

Standing alongside Pompeo in front of a row of American and Israeli flags, Netanyahu called the six-hour visit a “testament to the strength of our alliance.”

The visit comes amid an uptick in Palestinian violence. On Tuesday, 21-year-old IDF Staff Sergeant Amit Ben Yigal, Hy”d, was killed during an arrest raid in Jenin when a rock thrown off a rooftop struck him in the head — the first IDF casualty in 2020. The IDF has embarked on a massive manhunt for the killer and said it has arrested 10 suspects so far.

Pompeo expressed his condolence on the death of the soldier and reiterated that “Israel has the right to defend itself and America will consistently support you in that effort.”

Ahead of the visit, Pompeo told Yisrael Hayom on Tuesday that the meeting was important enough to justify flying to Israel for face-to-face talks despite the pandemic and that they would discuss efforts to keep Iran from obtaining nuclear weapons, the Trump administration’s Mideast plan, and efforts to combat the coronavirus.

He declined to say whether the administration supports unilateral annexation by Israel, saying he was coming to hear Netanyahu and Gantz’s perspectives on the matter. U.S. Ambassador David Friedman, an architect of the Trump administration’s plan, has said Israel could begin annexing territory within weeks. Friedman, who is currently ill but tested negative for the coronavirus, will not be meeting Pompeo.

Netanyahu told Pompeo the new government offered “an opportunity to promote peace and security based on the understandings I reached with President Trump.”

Israeli hard-liners are eager to unilaterally redraw the Mideast map before November’s U.S. presidential election. Annexation would also give President Donald Trump an accomplishment to shore up his pro-Israel base, particularly politically influential evangelical Christian voters. Wednesday’s meeting could provide an indication of how far the administration is willing to allow Netanyahu to move.