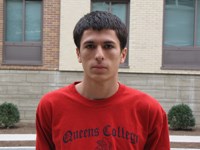 The FBI brought weapons charges Wednesday following a New York City sting operation against two men, one of whom espoused racist and anti-Semitic views on social media and had been acquiring tactical military gear, authorities said.

Joseph Miner, 29, and Daniel Jou, 40, were charged with buying firearms with obliterated serial numbers from an undercover agent in Queens, including a fully automatic machine gun that prosecutors described as “a weapon of war.”

It was not clear whether the men, who are neighbors, were planning an attack, authorities said. But prosecutors pointed to alarming social media posts Miner made praising Hitler and the machete attack last year on a Chanukah celebration north of New York City.

In January, Miner “posted a photograph of the entrance to a Jewish Community Center in Queens,” Assistant U.S. Attorney Josh Hafetz wrote in a court filing. In another, Miner warned he “will probably have to shed my blood or go to prison for the things I say and do and stand for.”

Days earlier, prosecutors said, he purchased “body armor emblazoned with an iteration of the Wolfsangel, a Nazi party symbol.”

“In his own social media postings, he has glorified acts of murder and terrorism against racial, ethnic and religious groups,” Hafetz wrote. “More ominously, he has ruminated about engaging in such violent conduct himself.”

Miner lives with his parents in Queens and has no adult criminal history. He was ordered held without bail Wednesday after a brief appearance in Brooklyn federal court. His defense attorney did not immediately respond to a request for comment.

Authorities said Miner paid the undercover agent $2,000 cash for a shotgun and handgun with obliterated serial numbers, as well what authorities described as an “AR-15 assault style ghost gun” with a silencer and high-capacity magazine.

Jou is accused of buying two firearms during the same meeting, including a fully automatic M4 rifle with silencer and a handgun with an obliterated serial number. “That’s a weapon of war,” Hafetz said of the rifle. “This is serious stuff.”

Jou’s defense attorney, Michael Padden, said authorities have no evidence the weapons were intended for “any other purpose other than home defense.” Jou also was held without bail.

The charges came a day after the Anti-Defamation League reported that American Jews were the targets of more anti-Semitic episodes in 2019 than any other year over the past four decades.

More than half of the assaults counted by the group occurred in New York City.