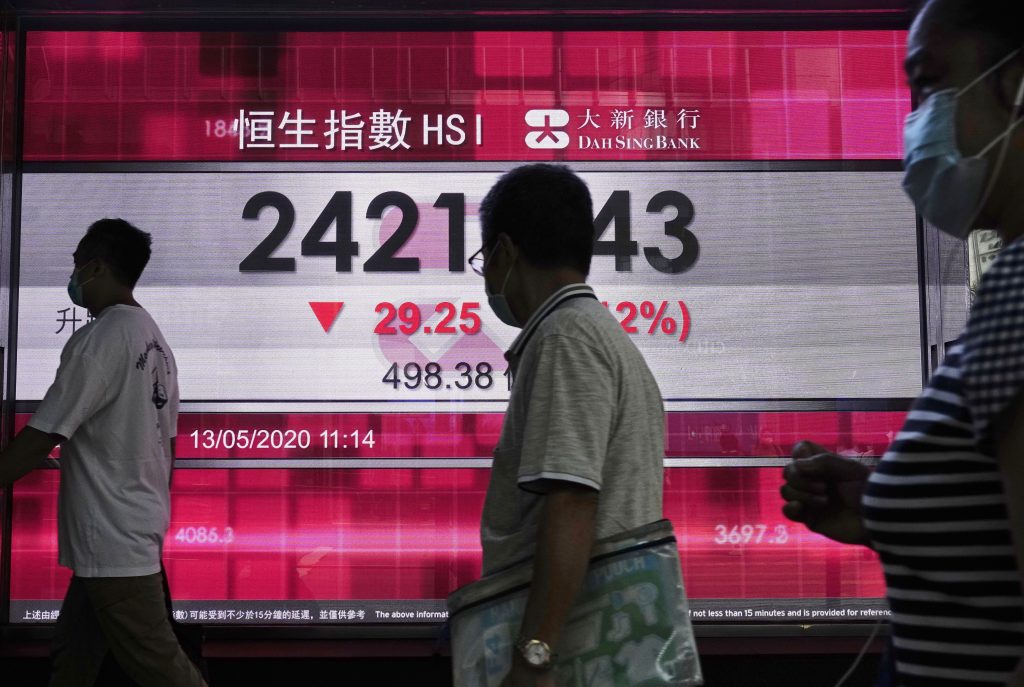 Shares were mixed in Asia on Wednesday after Wall Street logged its biggest loss in May on worries about the downside of reopening the economy too soon.

Underscoring concerns about the risks of ending shutdowns before the coronavirus pandemic is brought under control, the top U.S. infectious diseases expert, Dr. Anthony Fauci, told Congress bluntly that if the country reopens too soon, it could not only cause “some suffering and death that could be avoided, but could even set you back on the road to try to get economic recovery.”

Those comments reverberated in global markets.

“Over and above the recent resurfacing of cases in countries such as China and Germany, Dr. Fauci’s comments pack in more arguments against a rapid reopening of U.S. states which had been supported by President Donald Trump and fueled the gains seen for U.S. markets of late,” Jingyi Pan of IG said in a report.

The Shanghai Composite index gained 0.3% to 2,899.38 and South Korea’s Kospi jumped 0.1% to 1,935.00 after the government said it needed more time to assess recent outbreaks and would not immediately re-impose new restrictions to fight the virus.

The market will essentially be in wait-and-see mode for the next two to four weeks as investors gauge how reopenings are going, analysts said.

“No one, and I mean no one, including corporations, wants to wear the scarlet letter for being responsible for the secondary outbreak,” Stephen Innes of AxiCorp said in a commentary.

“So while reopenings may occur, they will only happen in a gradual context where social-distancing rules permit or workplace safety can be exercised,” he said.

After dropping by roughly a third from February into late March on worries about the coming recession, share prices began recovering after central banks and governments unleashed trillions of dollars of help for swooning economies. The latest implementation of that came Tuesday, when the New York Fed began buying funds to support the corporate bond market.

The S&P 500 dropped 2.1% to 2,870.12 on Tuesday after spending much of the day drifting between small gains and losses, as investors debated whether the lifting of lockdowns across U.S. states and the world will drive an economic rebound or just more coronavirus infections.

Treasurys were some of the first investments to signal the economic devastation coming from the pandemic. The yield on the 10-year Treasury was steady at 0.67%, down from 0.72% late Monday. It tends to fall when investors are downgrading their expectations for the economy and inflation.