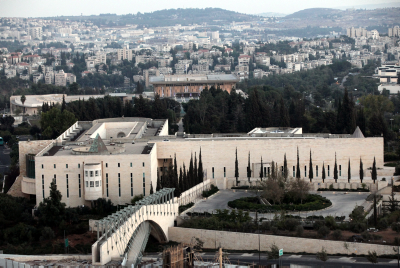 The single greatest threat to Israel as a Jewish and democratic country is the Supreme Court, acting in its capacity as the “High Court of Justice.”

That’s because: a) anyone who doesn’t like a law or practice can petition the High Court to get it overturned; b) the High Court has decided that everything is judicable and taken for itself the right to throw out laws that were passed by the democratically elected Knesset and, l’havdil, to trample laws and practices that reflect core Jewish values; and c) this all-powerful court is not elected and therefore not representative of the public, and not subject to oversight.

The result, in the words of Simcha Rotman, author of The Ruling Party, How Israel Became a Legalocracy, is that “they’re stealing our democracy.”

A particularly infuriating example is the recent ruling deeming it illegal for the Health Ministry to forbid the eating of chametz in hospitals during Pesach and security guards from searching visitors to ensure they don’t bring it in.

While the vast majority of Israelis support such regulations — surveys show that 98% hold a Seder and the vast majority don’t eat chametz — the court ruled in favor of secularists and Arabs who found the idea of going without chametz in hospitals for seven days a year an intolerable violation of their human rights.

Common sense says that the opposite is true; that it is the human and religious rights of the majority that are being violated.

Moreover, as Sephardi Chief Rabbi Harav Yitzchak Yosef argued, it is a matter of pikuach nefesh. “Permitting the presence of chametz of any kind could make public hospitals in the State of Israel off-limits to Jews who observe tradition,” the Rav wrote in a letter to the Health Ministry. “[That’s] because if they are forced to choose between possibly violating an obligation of the Torah and going to the hospital during Pesach, those who observe tradition, which is most of the Israeli public, might refrain from going to the hospital. This poses a real risk to health and public well-being.”

Only one justice ruled in favor of the chametz ban: Neal Hendel, a religious Jew. But the majority of the panel that heard the case, and indeed of the entire Supreme Court, sees eye to eye with the Secular Forum and the Adalah Legal Center for Arab Minority Rights on the place of Judaism in the State of Israel.

Which is why it consistently rules against Judaism, whether the issue is the running of buses and opening of businesses on Shabbos, separate gender concerts or the yeshivah draft.

Something has to change. Either the court has to accept that its job is to interpret laws, not make them, and respect the separation of powers; or it has to subject itself to the democratic process, as is done in the United States, where justices are chosen by the president and approved by Congress.

Otherwise, elections are an exercise in futility because no matter what government the people elect, the ultimate power to set policy rests with an unelected, unrepresentative group that disdains the will of the majority.