Community Opening Up: The Prep, the Call, the Future
CommunityCoronavirus 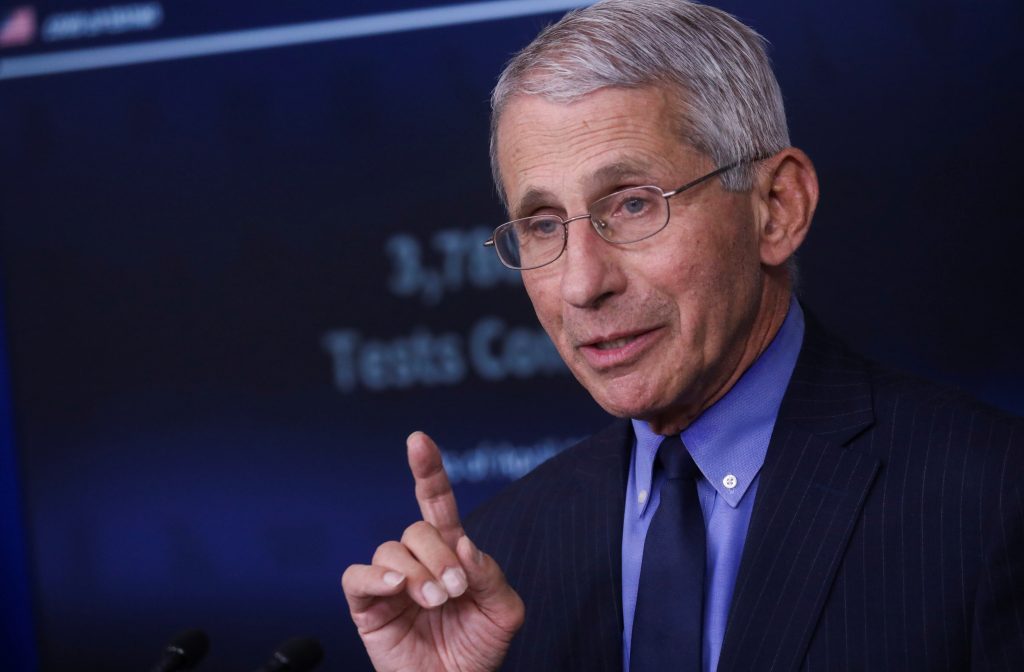 It began with the participating Rabbanim opening their hearts and mouths in earnest prayer, as they beseeched the Al-mghty to guard the community, the country, and the courageous officials who are at the forefront of this valiant campaign against COVID-19.

The conference call between the leaders of the Orthodox Union (OU) and Dr. Anthony Fauci, Director of the National Institute of Allergy and Infectious Diseases and head of the White House’s Coronavirus Task Force, was arranged in order to gain insight and exchange ideas into the gradual reopening of American society and its economy, and how shuls and other Jewish institutions should prepare for it and craft their collective guidelines for the future.

“The actual call was the culmination of many days of preparation,” Rabbi Adir Posy, director of the Department of Synagogue & Community Services for the OU, told Hamodia in an exclusive interview. “The Poskim of the OU have had extensive discussions with medical professionals concerning this issue, and after clarifying the various medical elements, they wanted to hear Dr. Fauci’s opinion as well, in order to integrate the thinking of the public health officials into their final decision as to what we could, and what we should, actually do.”

“The discussion with Dr. Fauci was a key point for the Rabbanim, as it helped them hone the best guidance and advice that would ultimately be codified in the Rabbinic guidelines which were being formulated,” Rabbi Posy added.

Moderating the conference was Rabbi Moshe Hauer, the incoming executive vice president of the Orthodox Union. Rabbi Hauer began by asking about the feasibility of returning to tefillah b’tzibbur on a schedule of three times a day, seven days a week.

Dr. Fauci was deferential to the leadership of the OU, and he began by expressing his unfamiliarity with the practice. “I don’t have a full appreciation of the importance of the timetable of three times a day,” he stated. “I’m afraid that if you do it exactly the way you did it before, even under the circumstances of trying to maintain distance, you’ll put yourselves at risk. Don’t give it up completely but modify it in a way to minimize the kinds of ways we know are risks.”

Rabbi Hauer responded by sharing some of the initial direction which they would soon be giving over to their associated Rabbanim and shuls. “The guidance we crafted and will be publishing includes removing seats, when possible, so social distancing is fixed. We’re encouraging masks in addition to eight feet of distancing and, knowing how we like to get together, we’re encouraging eight feet because it may be closer to six feet.

Dr. Fauci encouraged the extra caution, saying, “the emotional culture of the Jewish people” is one which fosters closeness, and some may find it hard to resist getting together when they join for prayers. Indeed, when he was informed of the opening Tehillim recited at the onset of the call, Dr. Fauci responded emotionally, “By the way, as you’re doing your praying, make sure you include me in that, okay?” Rabbi Hauer assured him that “we will continue having you in your prayers — G-d should continue to grant you good health and wisdom.”

While he suggested staggering minyanim in order to limit the number of participants present for each quorum, he expressed reservations about having everyone three times a day during the first phase of the reopening.

“How disruptive would it be to a variety of aspects, including spiritual wellbeing, if you not only did the extra spacing and physical separation but also said that, for the time being, once a day and five days a week instead of three times a day, seven days a week. If you can phase that in, though I don’t know what that would mean to you spiritually, but if it can be modified at least temporarily, I would modify number of days, times of day, and separation.”

Rabbi Posy explained to Hamodia that Dr. Fauci was not suggesting to modify Jewish practice, but rather pointing out that if everyone attended each tefillah, the sheer number of attendees may make it impossible to maintain the suggested limits of phase one of reopening of America, which will limit crowds. “It may very well be that at the beginning, we may have to institute a rotation system, where some mispallelim attend one tefillah and others come for another. This, of course, will vary from congregation to congregation, depending on the space and membership of each shul.”

“The Jewish community is scattered throughout the country, but you’d have to determine where you are in the outbreak,” Dr. Fauci said. “If you’re in New York City or Chicago — which still has a lot of death — that’s much different than in Washington state or Wyoming or Arkansas. If the level of infection in your community is low, you might say “We’ll do physical distancing, but we’ll do three times day. But if you’re in a suburb of Chicago or New (York), you might do once a day and three days a week. You need to be flexible.”

“One of the main points that was conveyed both by the representatives of the OU as well as by Dr. Fauci was the need to balance the yearning to return to shul with the fealty to the preservation of life and pikuach nefesh,” Rabbi Posy said. “By rushing back too soon or with too few safeguards in place, we run the risk of [reversing] progress made to date.”

As far as when to begin communal gathering for tefillah, it was suggested that the Jewish community wait for 14 days after the region opens up by loosening restrictions and evaluating if there is any rise in the rate of infection during that time. “As an example, if New York opens up on schedule on May 15, the first day of possible minyanim would be May 29. That, of course, is if b’ezras Hashem the rate of infection remains stable during that time.”

Rabbi Hauer posed the question of testing for antibodies, and how much the results of these tests can be relied on when making decisions. In his response, Dr. Fauci reiterated what has been publicized by the vast majority of medical experts who have commented on this subject.

“It’s a reasonable assumption that after a person gets infected and clears the virus and [has] antibodies, that those antibodies are protective. That’s the basis for doing the plasma transfusions. What we don’t know definitively but have a reasonable assumption [to assume is] that those antibodies are protective. If you’re the one who was infected and have a positive result, you can assume you’re protected but science hasn’t proven it yet.

“My recommendation is to keep your eye out for studies that say a certain level of antibodies means protection. But until then, I would not relax the recommended precautions merely because your antibody test is positive. We think that’s the case, but we don’t know that’s the case….we’re making assumptions and those are reasonable assumptions, but as a scientist I’d like to have something proven to tell you that if you’re antibody positive you’re immune.”

Although immunity is not assured through the antibody tests, Dr. Fauci did state that if a nasal test is negative twice in a row, and was administered 24 hours apart, you can be reasonably assured that you will not shed the virus and infect others.

The call ended with Dr. Fauci projecting how he saw the next few months playing out, especially the Yamim Nora’im which fall in late September, 2020, followed by Sukkos in early October.

“It is likely that if we continue in a measured reopening, gradually by phases that I hear you speak about — and I’m pleased to hear that your community feels cautious about that — if we do that, I’d imagine by the time we get to June, July and August the level of infection will be quite low.

“As we get to the fall, there will almost certainly be virus. Whether that becomes a second wave depends on our preparedness and our ability, [so] when infections do reappear, we can put the lid on them by identification, isolation and contact tracing. You need certain tools to do that. You need to test efficiently and quickly. You need to isolate people out of society when they’re infected so they don’t spread. You need to do surveillance in vulnerable situations — nursing homes, prisons, meatpacking facilities — if we have that in place in October, November and December, even if there are cases we should be able to handle them.

“We should be able to get back to some normality but it will be a new normality. It won’t be like it was a year ago. It will take at least a season or two to get herd immunity [up], and hopefully by then we’ll have a vaccine in a year and a half. We’re not going to be 100% normal for at least another couple [of] cycles.”

The next day, Friday, May 8, the OU released their recommended guidelines, which they wrote were formulated under the direction of their poskim, Harav Hershel Schachter, shlita, and Harav Mordechai Willig, shlita, and with the approval of Harav Dovid Cohen, shlita, and Harav Asher Weiss, shlita.

The guidelines stressed that these proposals are meant to be implemented only after local authorities allow such gatherings to take place. On the suggestion of Dr. Fauci, it was recommended that the shuls should not commence any minyanim until a minimum of 14 days after the authorities allow gatherings to take place. This would allow for a reasonable amount of time to see the results of the loosening of restrictions, and allow the Rabbanim to assess the best way to go forward.

All rules of social distancing and safety, including wearing masks and hand washing, are a prerequisite for opening the shuls. It also suggests that seating be designed to allow a minimum of eight feet separating congregants during davening, which could be maintained by removing seats in between, and staggering minyanim in a manner which will limit the participants of any given minyan. It also cautioned the Rabbanim to appoint responsible people to maintain compliance and to keep order, especially while entering and exiting the shul.

Additional recommendations concerning limiting the times of the tefillos were mentioned, including possibly donning the tallis and tefillin before coming to shul, and left for the poskim to determine this and other issues when the time comes. Other issues of halachah were brought to the attention of the minyanim, including the difficulty in performing Krias haTorah and several related issues.

Acknowledging that keeping these instructions may be difficult with the number of people involved, it was noted that it may be necessary to stagger not only the minyanim, but also to devise a method of rotating which people can attend any particular tefillah.

Due to the serious nature of the virus and its effect on certain groups, including the elderly and those who have compromised health or any sign of illness, the guidelines stressed that any people in these groups not attend minyanim at this time.

The guidelines also cautioned that no social gathering, such as a Kiddush, should be allowed at this time.

A discussion about permitting outdoor minyanim, both on shul premises and on private grounds, was included, with the caveat that any such minyanim should be organized under the auspices of the Rav and with people assigned to ensure all safety measures are kept. If it is deemed that there is a lack of compliance, these types of minyanim may need to be reassessed.

The guidelines stressed that the opening of shuls will not be accomplished as a one-time event, and it will be necessary to implement this over an extended period of time.