Regional Cuomo: Wear a Mask to Respect Nurses Who Died to Save Us
CoronavirusRegional 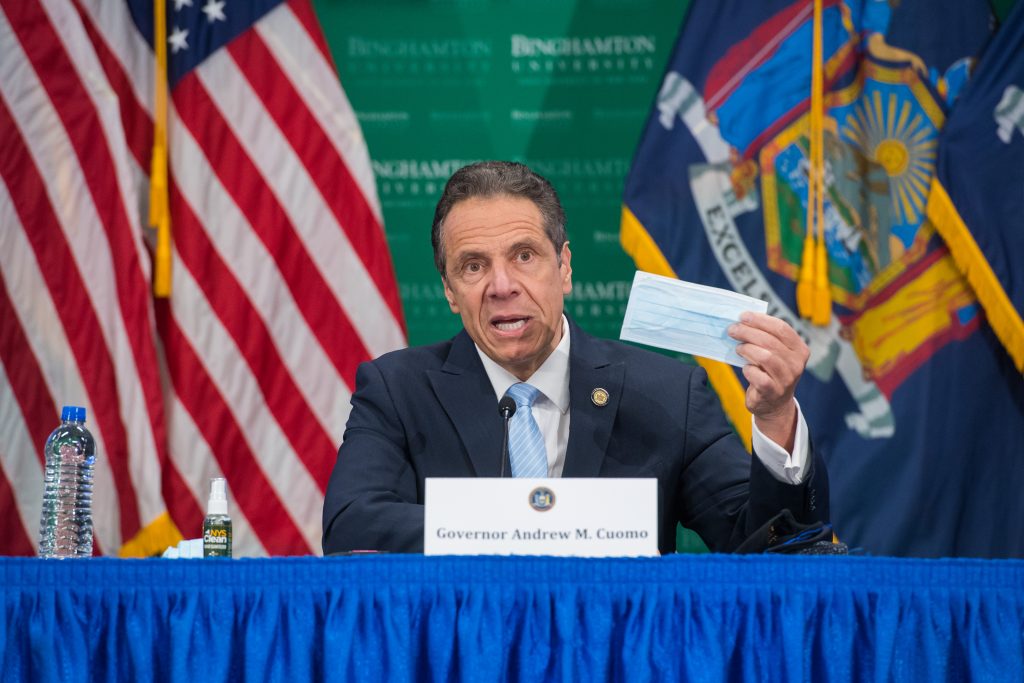 New York Gov. Andrew Cuomo called face masks a sign of respect for others on a day the state reported 195 new deaths. Other data released Tuesday shows that nine out of 10 people arrested for coronavirus-related offenses in New York City have been black or Hispanic.

Here are the latest coronavirus-related developments in New York:

Warning that the state isn’t out of danger yet, Cuomo on Tuesday urged New Yorkers to wear masks out of respect for the nurses and doctors who have died to protect people from the pandemic, which he said had killed another 195 people.

During his daily briefing, Cuomo recounted a tense conversation about masks he had with a man while on a recent walk with his daughter. He said people should be aware that masks, which are worn to reduce the wearer’s chance of infecting others, are a sign of respect to everyone they walk past, as well as to workers pulling society through the outbreak.

New York requires people to wear face coverings when in close proximity to others in public. As people grow wearier of the extended lockdown, some complain that requirement infringes on individual liberty.

Cuomo instead stressed “reciprocal responsibility” as some upstate areas prepare to start phasing in economic activity this week.

The 195 deaths recorded in New York are a jump from 161 the previous day, but still about a quarter of the highest daily tallies just over a month ago. Hospitalization rates also continue to decline.

A federal judge has ordered Cuomo to include an American Sign Language interpreter on the screen alongside him as he delivers his daily press briefings.

U.S. District Judge Valerie Caproni issued the order Monday as she considers a lawsuit filed by a disability rights group that claims Cuomo is the only governor who has failed to do.

The governor has argued that the state has provided “reasonable accommodations” to deaf New Yorkers through a separate online ASL stream and closed captioning.

But the lawsuit filed May 7 by Disability Rights New York included several examples of deaf New Yorkers who lack internet access or who don’t read or write in fluent English. Four individuals named in the lawsuit said they could access Cuomo’s widely watched briefings if he offered an additional accommodation of including an interpreter in the frame of his main stream.

“The coronavirus has hurt household finances, and the April sales tax figures show how deep it is cutting into municipal finances,” DiNapoli said.

-New York is now investigating about 100 cases of a syndrome in children that’s thought to be related to the coronavirus. It affects blood vessels and organs and has symptoms similar to Kawasaki disease and toxic shock. Three children in the state have died.

– Two New England hospital systems tried the latest twist in internet matchmaking: online swap meets. As the coronavirus pandemic stretches on, online platforms have popped up to match hospitals that need masks, gowns, ventilators and even doctors with those that have extras.

– Even as President Donald Trump urges getting people back to work and reopening the economy, an Associated Press analysis shows thousands of people are getting sick from COVID-19 on the job.