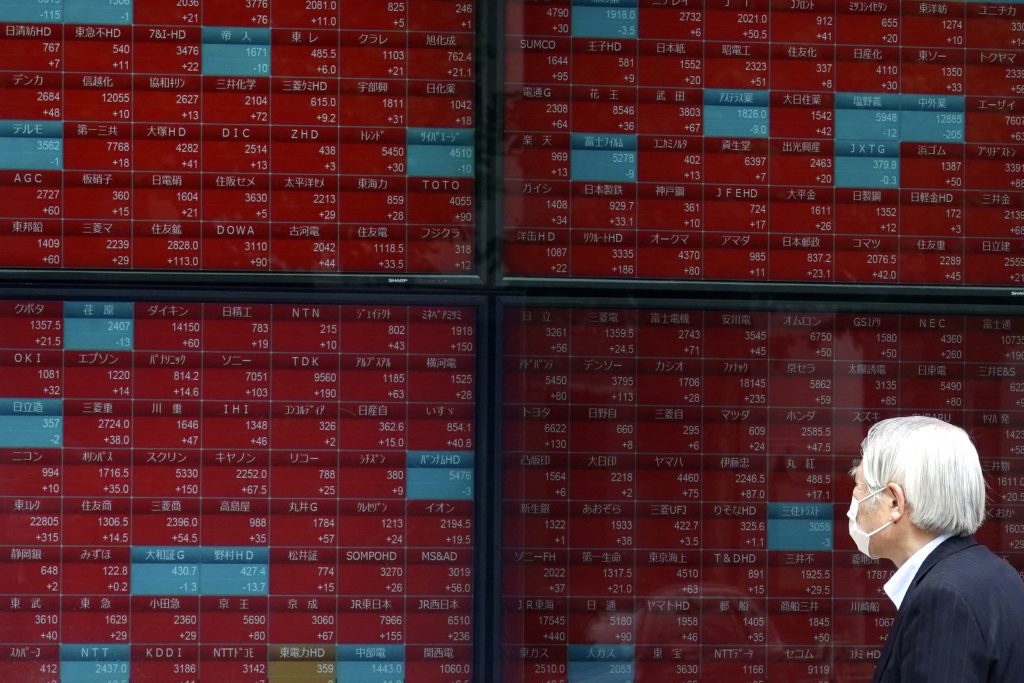 Stocks are mostly down on Wall Street in midday trading Monday, as the market takes a pause following the strong gains it made last week.

The S&P 500 was down 0.3% after trimming sharper losses from earlier in the morning, following up on drops in Europe and a mixed performance in Asia. While relatively modest, the declines were widespread, and nearly three out of four stocks in the S&P 500 fell.

The losses ate into a recent rally for stocks, which have been shrugging off the economic devastation currently sweeping the world. Some investors are looking ahead to the possibility of a strong economic recovery later this year, after governments reopen economies and lift business shutdown orders meant to slow the spread of the coronavirus.

That optimistic view took some hits Monday, though, as worries rose about the possibility of new waves of infections hitting countries that are further ahead in lifting lockdown measures.

In South Korea, for example, one customer has been linked to dozens of new infections. That pushed authorities to reimpose restrictions on clubs, as well as delay the reopening of schools by a week. Investors also pointed to small but disconcerting increases of infections in China and elsewhere.

Tech giants have done well through the pandemic this year as investors look for companies that can win in either a “normal“ or a stay-at-home economy. The Nasdaq is up 2% for 2020 so far, when the broader S&P 500 is still down nearly 10%. Advanced Micro Devices rose 3.6% for one of Monday’s biggest gains, and the gains for tech stocks helped the S&P 500 trim back its early morning loss of 0.9%.

Still, most stocks fell, with the sharpest losses coming for those whose profits tend to track most closely with the strength of the economy.

Raw-material producers in the S&P 500 fell 2.1% for the biggest loss among the 11 sectors that make up the index. A weaker global economy wouldn’t need as many basic building blocks.

Financial stocks were also weaker than the rest of the market. They’ve been hit hard this year on worries that the recession will lead to a wave of households and businesses defaulting on their loans. Bank of America dropped 3.5%, and Citigroup lost 4%.

The data streaming in on the economy remain oppressively bad. After a report on Friday showed U.S. employers cut a record-setting 20.5 million jobs in April, Italy reported Monday its largest-ever drop in industrial production. More data reports this week include U.S. unemployment claims and retail sales and Australian jobs.

Companies remain uncertain about the future, with many opting to give no financial forecasts during their latest quarterly earnings reports. On Sunday, one of Latin America’s largest airlines, Chile’s Avianca, asked a New York City bankruptcy court for protection from creditors while the carrier reorganizes amid a travel slump it said has cut revenue 80%.

Even outside the possibility of a resurgence of infections, many analysts see other reasons for skepticism about the stock market’s 30% rally since late March. Strategists at Goldman Sachs said the market appears to be overlooking a drop-off in buybacks and dividends as companies look to preserve cash, the threat of more U.S.-China trade tensions and the possibility that the upcoming U.S. elections could lead to higher corporate tax rates.

Most of all, companies themselves are talking about how uncertain the recovery looks, which stands in stark relief to the quick, vigorous rebound that the stock market seems to be pricing in. The CEO of pump- and valve-maker Idex Corp. said last month he expects it to happen in fits and starts.