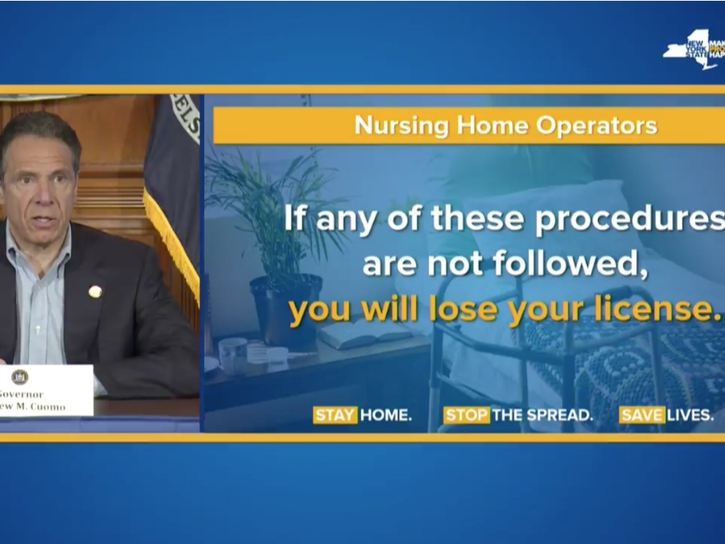 New York nursing homes must start twice-weekly coronavirus testing for all staffers and will no longer be sent COVID-19 patients leaving hospitals, Gov. Andrew Cuomo announced Sunday after facing criticism over the handling of nursing facility outbreaks. New York City is responding to complaints about racial disparities in enforcement of social distancing by ramping up a corps of city workers to try to keep people in line without involving police.

The new testing requirements and ban on hospitals sending coronavirus patients to nursing homes came a day after an AP report in which residents’ relatives, nursing home watchdogs and politicians from both parties criticized the Cuomo administration’s policies on both.

They second-guessed a state directive as requiring nursing homes to take on new residents infected with COVID-19 — an order that critics said accelerated outbreaks in facilities that are prime breeding grounds for infectious diseases.

Of the nation’s more than 26,600 coronavirus deaths in nursing homes and long-term care facilities, a fifth of them — over 5,350 — are in New York, according to a count by The Associated Press.

That’s the highest number of nursing home deaths in the country, though other states have also struggled to control the virus in nursing facilities. Indeed, they account for a higher percentage of coronavirus deaths in most other states, Cuomo said.

Critics have faulted New York for taking weeks to release the number of deaths in individual homes, for still not releasing the number of cases and for not conducting or requiring widespread testing in the facilities.

Now, workers will be tested twice a week, Cuomo said at a news briefing. Residents are being tested as much as possible, he said.

A March 25 state health department directive said nursing homes couldn’t refuse new or returning residents because they tested positive for the virus. The policy, similar to one in neighboring New Jersey, was intended to help free up hospital beds for the sickest patients as cases surged.

Now, “we’re just not going to send a person who is positive to a nursing home after a hospital visit,” Cuomo said Sunday. He said such patients would be accommodated elsewhere, such as sites originally set up as temporary hospitals.

The new policy still allows nursing homes to take some people with COVID-19, such as those who are at home and need care. But hospitals are responsible for finding alternatives for the patients they discharge, and nursing facilities shouldn’t take on coronavirus patients if unable to care for them, Cuomo said.

The Democrat also emphasized that nursing homes should transfer any person they can’t care for.

For most people, the new coronavirus causes mild or moderate symptoms. For some, especially older adults and people with existing health problems, it can cause more severe illness and lead to death.

Cuomo did not extend New York’s stay-at-home restrictions to June 7 — despite a claim by a spokesman that he did, according to a top aide to the governor.

Melissa DeRosa, secretary to the governor, released a prepared statement Saturday evening saying the May 15 expiration date for the restrictions still stands “until further notice.”

Cuomo plans to allow regions to gradually begin restarting economic activity after May 15 if they demonstrate progress in taming and tracking the outbreak. DeRosa said new guidance will be issued for regions of the state at that time based on those metrics.

Some upstate areas hope to begin reopening later this month, though none of the state’s 10 regions had met all seven required benchmarks earlier this week.

Regions wishing to phase in economic activity must show that COVID-19-related deaths and hospitalizations are trending down and that there are enough hospital beds to meet a surge. Counties will have to increase testing and tracing and businesses will need to adapt to protect workers.

Businesses will reopen in four phases, starting with construction, manufacturing and retail with curb-side pickup.

After an outcry over racial disparities in New York City’s enforcement of social distancing, the mayor planned Sunday to double the ranks of non-police workers trying to persuade people to comply with the policy.

The number of city workers deployed as “social distancing ambassadors” will grow by next weekend from around 1,000 to 2,300, Mayor Bill de Blasio said in an online media briefing.

“More and more, the emphasis will be on a communicative, encouraging approach,” the Democrat said, while noting that enforcement through ticketing “will still be there when needed.”

The city didn’t immediately have information on social distancing arrests or summonses, if any, over the weekend. De Blasio reiterated there have been relatively few — under 10 summonses a day citywide — but that enforcement needs to be done “fairly and consistently in all communities.”

Criticism has arisen along with videos of violent arrests — including scenes of a police officer running at a black man and throwing him to the ground for mouthing off and an officer punching a man in the head as he lay pinned to a sidewalk — and statistics on the racial breakdown of police action taken in the name of curbing the spread of the COVID-19 virus.

New York City police department data released Friday showed that of the 374 summonses issued through May 5 for violating distancing orders, 52% were given to black people and 30% to Hispanic people.

The mayor on Friday said those statistics show “something’s wrong.” He pledged more training and clearer protocols for officers.

Citing such numbers, police reform advocates have pressed the city to stop using police to enforce rules that require people to wear masks and stay 6 feet (2 meters) apart from anyone who doesn’t live in their own household.