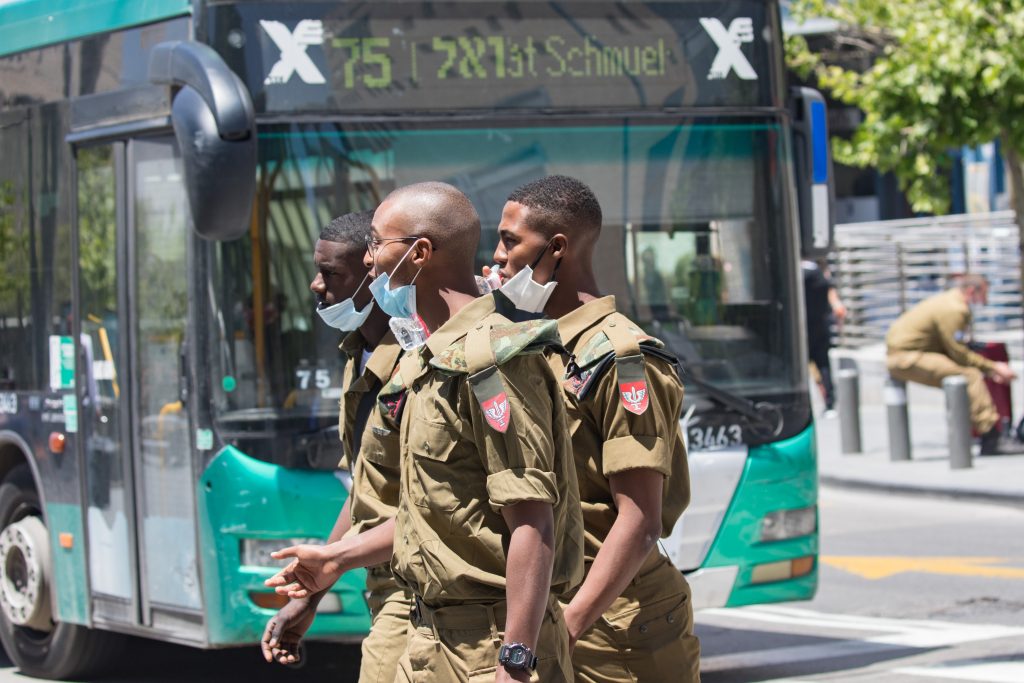 A failure on the part of government ministries to coordinate led to long lines and overcrowding at bus stations around the country on Sunday as thousands of soldiers returned to their bases after the weekend.

The IDF had said on Thursday that the soldiers would be able to use public transportation, but apparently little thought was given to making it go smoothly. With the bus lines still running under Health Ministry-prescribed limits, no trains at all, and no special shuttles to accommodate the soldiers, the scenes reported at several central bus stations provided another example of the herky-jerky reopening of the country as the coronavirus ebbs.

An official from the Transportation Ministry told Channel 12 that the military’s decision to order soldiers back on buses had not been coordinated with them.

“Public transportation has not yet returned to full routine and is very busy early in the morning — the bus stations have become a real incubator for the coronavirus, and it is clear who is responsible for it,” the unnamed source said.

However, a spokesperson for the IDF responded that “the return to public transportation was coordinated with the Defense Ministry and is in line with the regulations for the national economy and Health Ministry guidelines.”

Commuters were understandably grumpy about the bumpy rollout.

“People talk about infrastructure and electrical work being done on the fast rail to Tel Aviv, but for now, there is no replacement and public transport is not functioning,” said a passenger in Yerushalayim trying to get to Tel Aviv, waiting for a bus in lieu of a half-hour train ride.

Conditions weren’t optimal within the cities, either. “I’ve been waiting for the bus for half an hour,” a young man waiting at the station on Herzl Street in the center of Ramat Gan told a Jerusalem Post reporter.

Another young woman asked, “We are being forced to go by car again. Now there are fewer traffic jams, but what will happen when everyone returns to work?”

Dan bus company spokesperson Eitan Fixman said: “We are making every effort to serve the public during these difficult days and are doing everything possible to maximize our existing resources and provide the best possible service in accordance with state guidelines.”

Noting the current limits on capacity —50-passenger buses limited to 20—Pixman said “This means that for every bus that used to travel in the past regularly, under today’s guidelines we would require three buses and three drivers, and no company has those resources.”

“Our drivers have been working hard during a difficult period and carrying out a difficult task, and I turn to the public, if a situation arises in which you cannot board, or a bus does not stop at the station, it is not because they do not want to, but simply that drivers must not exceed 20 passengers.”