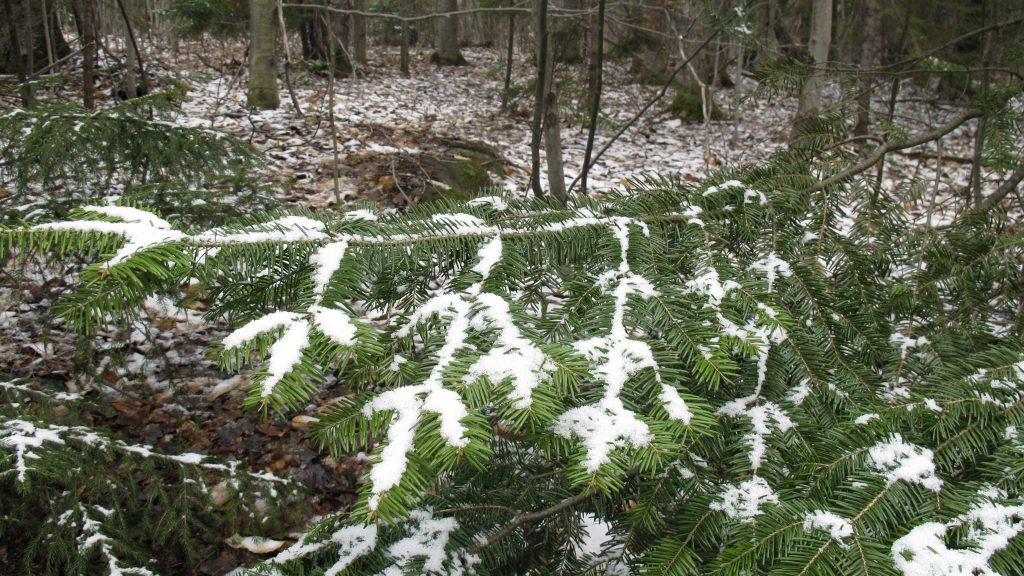 The northeastern U.S. is about to get a cold spring farewell from winter’s bad boy, the polar vortex, which could bring rare May snowfall and record-low temperatures to some areas over the weekend, forecasters say.

Usually the polar vortex is a batch of cold air that stays trapped in the Arctic all winter, but a couple times during the season, it wanders south and brings bone-chilling cold and snow to Canada and parts of the United States. This year the polar vortex stayed put, and the East had an unusually mild cold season.

Around this time of year, the polar vortex breaks up, but this breakup is a bit different, said Judah Cohen, a winter storm expert for Atmospheric Environmental Research, a commercial firm outside Boston.

“The polar vortex didn’t do much the whole winter, but on the way out I guess it kind of sent a message: Just because I didn’t do much this winter, don’t think I can’t,” Cohen said Thursday.

A low pressure system off the coast of southern New England is pulling cold air down from the north, Alan Dunham, a meteorologist with the National Weather Service in Norton, Massachusetts, said Thursday.

Forecasts called for perhaps as much as 2 inches of snow in the Berkshire Mountains in western Massachusetts on Friday into Saturday; an inch or so on grassy areas of central Massachusetts, southern New Hampshire and western Connecticut; and rain with a few flakes possible in the Boston area, he said.

Massachusetts hasn’t had measurable snow in May since 2002, when 2 to 3 inches fell in the Berkshires. There hasn’t been measurable May snowfall in Boston since 1977, Dunham said.

Upstate New York could see an inch of snow, and further down in New York City and the Hudson River valley is likely to see mostly rain, according to Hunter Tubbs at the National Weather Service in Gray, Maine.

Temperatures may plummet to record lows. The May 9 record low in Boston is 35 degrees, also in 1977. Freeze warnings are in place for parts of Pennsylvania, Tubbs said, with freeze watches stretching into New Jersey and as far south as Maryland.

“Definitely below average temperatures for pretty much the whole East Coast,” he said. “It’s going to be a pretty good dip in the jet stream.”

In northern New England, the greatest chance for snowfall accumulations this weekend is across the higher elevations, in New Hampshire’s White Mountains and in Coos County, and in northwestern Maine, Tubbs said. Sunday temperatures likely won’t get out of the 30s in the north, with 40s elsewhere.

“It’s definitely not too common to be getting snow this late in the season. But this will be a pretty impressive pattern shift,” he said.

He said records show snowfall in May in Maine and New Hampshire just a few times. In Portland, 5 inches of snow was recorded on May 11, 1945.

Some parts of northern Vermont were expected to get a mix of rain and snow early Friday morning. More snow showers were forecast for Friday night and Saturday morning.

The forecast didn’t surprise Rachel Kane, owner of Perennial Pleasures Nursery in East Hardwick, who said snow May isn’t uncommon in that area.

“Up in this part of the state it’s happened frequently enough that we never put up our shade cloth until getting close to Memorial Day,” she said, laughing.

Winter-like weather is bad news for Massachusetts golf courses, which were allowed to reopen Thursday after being forced closed by the state because of the coronavirus pandemic.

“Everything is against us, absolutely,” said Therese Barry, one of the owners at the Bungay Brook Club in Bellingham.

“We’re a weather driven business,” she continued. “But to have this happen the minute we are open is quite unbelievable.”

The unusual goodbye is splitting the United States. It’ll be unseasonably cold from the Great Lakes east and record warm from the Rockies west, Cohen said.