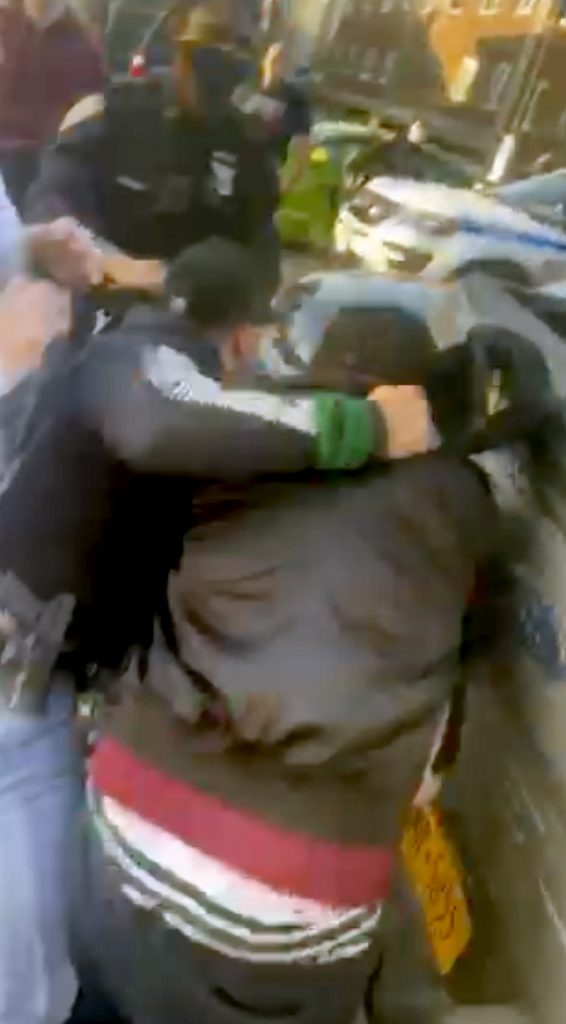 One newly surfaced video of social distancing enforcement gone wrong in New York City shows a police officer running at a black man and throwing him to the ground for mouthing off. Another shows an officer punching a man in the head as he lay pinned to a sidewalk, unable to fight back.

Despite mounting pressure to stop using police to enforce social distancing and data showing that such arrests disproportionately affect people of color, Mayor Bill de Blasio stood by the practice on Thursday, saying: “We’re not going to sideline the NYPD.”

The new videos, posted online after an officer was recorded Saturday pulling a stun gun on a man and violently taking him to the ground, stand in sharp contrast to photos and video tweeted by the NYPD showing friendly officers handing out face masks and gently reminding people to stay 6 feet apart.

Police watchdogs say the conduct shown in the videos suggests officers are using social distancing during the pandemic as a pretext to harass people of color along the lines of stop and frisk, a practice curtailed in recent years in which officers stop people on the streets and search them for weapons.

The Brooklyn district attorney’s office released data late Thursday showing that of the 40 people arrested for social distancing violations in the borough since mid-March, 35 were black, 4 were Hispanic and just one was white. All cases were dropped.

De Blasio responded in a tweet: “Saving lives in this pandemic is job one. The NYPD uses summonses and arrests to do it. Most people practice social distancing, with only hundreds of summonses issued over 6 weeks. But the disparity in the numbers does NOT reflect our values. We HAVE TO do better and we WILL.”

Brooklyn District Attorney Eric Gonzalez’s office called the incidents in the videos “disturbing” and said his office is reviewing them to determine if disciplinary recommendations or criminal charges for the officers are warranted.

Joo-Hyun Kang, the director of Communities United for Police Reform, said it’s time for de Blasio to “step in and remove the NYPD immediately from all social distancing enforcement.”

One of the new videos shows an officer knocking a 32-year-old man to the ground with his arm Monday night in Brooklyn after police say he took a “fighting stance” as officers wrestled his stepbrother against a squad car. Police say the men were part of a group that failed to disperse when told to comply with social distancing rules.

Another video, recorded Saturday, shows an officer throwing a 20-year-old black man to the ground and arresting him at Brooklyn’s Brower Park moments after the man was heard shouting insults at officers hauling his friend away in handcuffs. Police said both men were gang members with a history of arrests.

Other videos posted in recent days showed: an officer punching a man in the head as he lay on a sidewalk while being apprehended and a bystander being slugged in the face and thrown into a closed storefront by an officer after he recorded another officer taking a swing at a man during a chaotic social distancing sweep.

“I thought police were meant to de-escalate a situation, not escalate it,” said the roughed up bystander, Adegoke Atunbi, who was cited for disorderly conduct. “It’s a scary thing to be put on the ground. You have 6-7 people on top of you. You have no way to defend yourself, thinking you might die. It does something to your mind.”

Some officers in the videos weren’t wearing protective masks.

Police Commissioner Dermot Shea said the incidents should be evaluated on a case-by-case basis and that “a punch should not be assumed to be excessive force.” Officers are trained to punch someone when warranted as part of an escalating progression of force, he said.

Last week, officers interrupted a crowded funeral in Williamsburg. De Blasio stoked divisions further with a series of tweets singling out Jews for ignoring a ban on large gatherings. He later apologized in a conference call with Orthodox Jewish media outlets.

On Saturday, officer Francisco Garcia was caught on video slapping and punching a black man, 33-year-old Donni Wright, and dragging him to a sidewalk after leveling him in a crosswalk near a Manhattan public housing complex. Garcia was stripped of his gun and badge and placed on desk duty pending an internal investigation.

On Sunday, police issued at least one social distancing summons at a small protest organized by a group outside a Manhattan hospital, pitting free speech and public health concerns. De Blasio and Shea defended the response, wrongly arguing people had no right to protest during a pandemic.

Donna Lieberman, executive director of the New York Civil Liberties Union, said stay-at-home and other orders de Blasio issued in response to the crisis don’t give police “unfettered — and unconstitutional — discretion to ban all protest activity.”

“The right to protest is a bedrock of our nation’s principles, and it is never more important than in times of crisis,” Lieberman said. “The government may not needlessly restrict protest activity that is in compliance with important public health guidelines.”