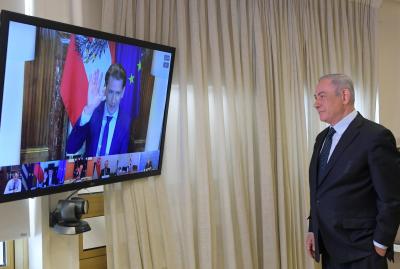 In a teleconference on Thursday, Prime Minister Binyamin Netanyahu‏‏ shared with world leaders Israel’s experience in combating the coronavirus and warned of the uncertainties which attend economic recovery.

“None of us knows what happens when we open up our economies and open up the schools and especially the young kids who cannot practice any separation and they’ll infect one another. We have to be ready for an accordion effect. We open up the economy and then we have to be prepared to shut down,” Netanyahu told the group.

In particular, the leaders sought to learn from the Israeli model for dealing with outbreak zones, “red zones” (restricted areas), in order to allow for the continuation of routines in other areas where infection is minimal, the Prime Minister’s Office said in a statement released afterwards.

“We isolated the clusters and treated them separately. We sent in the army into these areas. The army gave them food and assistance and so on until we brought it down to a reasonable level. Then we opened it up. We took them out. We took out the infected people from the homes and we took them to hotels. The question is ‘Can you have a localized policy as opposed to a national shutdown?’ The answer is absolutely. This is our experience and it’s actually a very successful one.”

Norwegian Prime Minister Solberg and Czech Prime Minister Babis presented their countries’ comprehensive monitoring programs, which include digital monitoring, in order to locate chains of infection and prevent the virus from spreading.