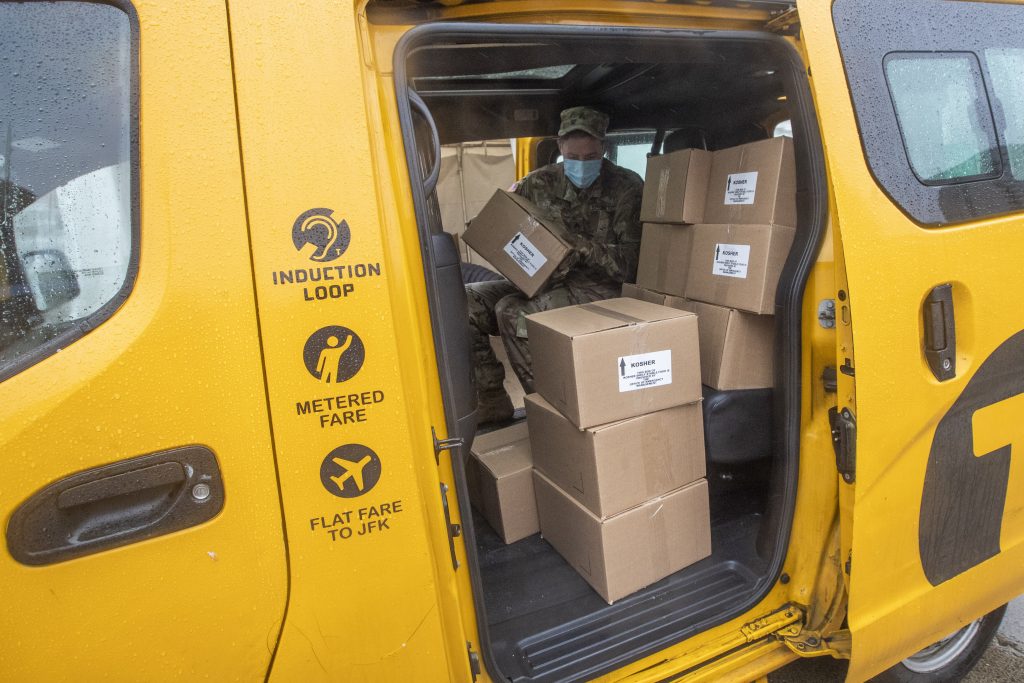 Yellow cabs are lining up before sunrise at food distribution sites across the city.

Motorcyclists are buzzing over bridges, bags packed with masks and gowns.

Even sushi-making robots are pitching in, freeing up acclaimed chefs to deliver meals to hospitals.

With their fellow New Yorkers in need, an army of unlikely couriers is distributing food and supplies in the coronavirus hotspot. They’re keeping families fed amid a surge in unemployment that has nearly doubled the city’s food-insecure population to about 2 million. They’re ensuring doctors have face shields and N95 masks after hospital stockpiles ran out. They’re lifting spirits for those affected most by the pandemic that has killed at least 13,000 New Yorkers.

“At this time, we need to help each other,” taxi driver Adel Jelassi said. “There’s a crisis, and I want New York to come back.”

Jelassi and thousands of other New York cabbies have helped provide more than 6.5 million meals since the state instituted stay-at-home measures in March.

The city-funded food delivery program, coordinated through New York’s Taxi & Limousine Commission, is paying drivers $53 for each six-stop route they take on. Most are getting three routes per day, which is helping keep TLC drivers financially afloat with potential riders stuck at home.

Taxis are arriving as early as 4:30 a.m. at food distribution sites, hours before they open, to ensure they get a full day’s worth of routes. Drivers take boxes packed with meals from the facilities to the front doors of families. All New Yorkers are eligible for the program and can sign up by calling 311.

“It’s helping me to survive, feed my kids and pay my bills,” Jelassi said. “And helping other people to get stuff at home.”

Jelassi has been making his pickups at Basketball City in Manhattan’s Lower East Side, a 70,000 square foot facility uniquely suited to the city’s food program.

The seven-court gym is usually a practice space for sports teams, and a home for adult leagues, camps and clinics for inner-city kids. Now it has been taken over by NYC Department of Parks & Recreation and filled with boxes of food donated by vendors such as Gate Gourmet, an airline food provider.

The site can send out up to 100,000 meals per week. It’s the only one of New York’s nine distribution centers sending food to all five boroughs.

“The whole thing is surreal,” said Bruce Radler, founder and CEO of Basketball City, who offered up his gym to the city after he was forced to close temporarily.

With New Yorkers mostly isolating at home, the city’s congested roadways have been freed of gridlock, allowing motorcyclists like Melanie Milano to zip between boroughs.

She’s putting the open streets to charitable use by delivering masks, gowns and other protective gear to medical professionals in short supply. She’s one of hundreds of bikers nationwide volunteering with Masks for Docs, an organization that purchases Personal Protective Equipment from suppliers and donates it directly to doctors. Medical professionals can request supplies through its website.

Masks for Docs has delivered more than 100,000 masks and tens of thousands of face shields in the U.S. in four weeks. Many of those drop-offs have been made by bike.

“Riding my motorcycle around the city to deliver PPE to people who really need it is the least I can do,” Milano said.

Milano has made about 15 runs with Masks for Docs.

“It makes me genuinely smile,” Milano said. “It’s hard in a time like this to actually feel genuine happiness. Knowing I’m helping somebody through this in a way is huge.”

Sushi chef Mark Garcia has been in hospitality for nearly 20 years, but he’s trying out a new position amid the pandemic — delivery man.

The executive chef at Kissaki in Manhattan has been bringing bluefin tuna, yellowtail and uni to hungry hospital workers using a car rented by restaurant owner Garry Kanfer.

Garcia was freed up to make the deliveries after Kanfer invested more than $20,000 in sushi-making robots to speed up production. The shop has one robot pressing out rice sheets for maki rolls, and it expects to add a maki-roll cutter and nigiri rice ball maker soon.

The rice sheet maker has helped Garcia and two other chefs crank out nearly 100 meals per day for hospital workers otherwise subsisting on burgers, pizza and other takeout.

The robots — somewhat common in Japan but rare for New York City restaurants — are also a timely investment for Kanfer. Kissaki opened in late January and hadn’t been selling takeout. With the robots, Kanfer is pivoting the restaurant from serving hand-rolled omakase in the dining room to offering more accessible items for delivery.

“We needed to adjust,” Kanfer said.