Israel Friedman: U.S. Will Acknowledge Sovereignty in Yehudah and Shomron; It Is Israel’s Decision
Israel 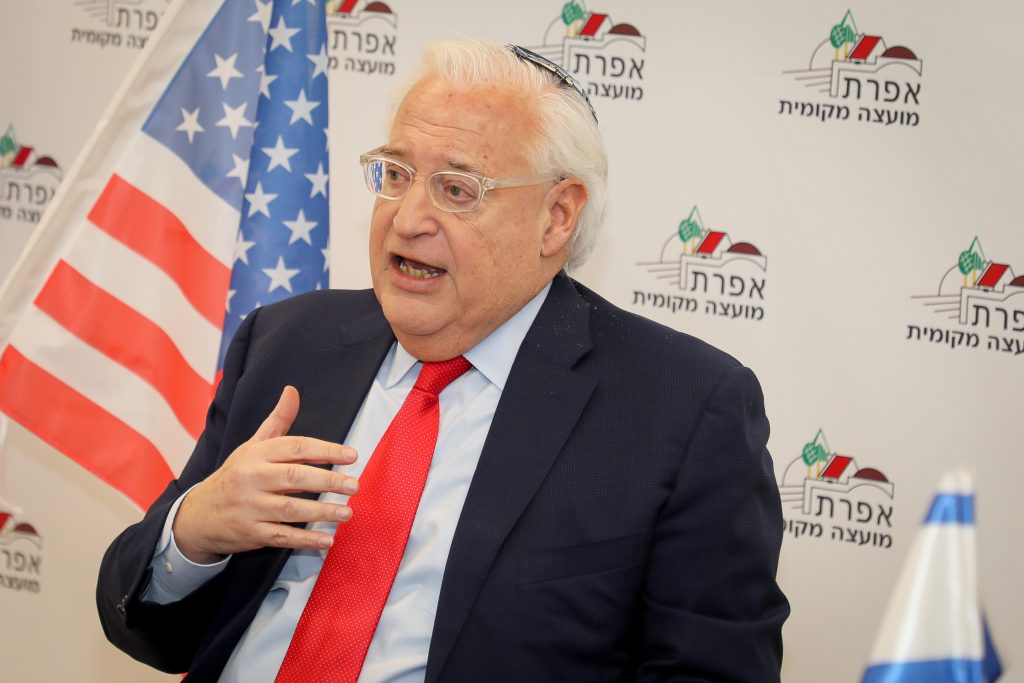 In an interview with Yisrael Hayom, to be published in full in its weekend edition, U.S. Ambassador to Israel David Friedman said that Washington is preparing to acknowledge an Israeli move to apply sovereignty in Yehudah and Shomron and in the Jordan Valley within weeks.

The interview was held on the occasion of the second anniversary of the relocation of the American Embassy in Israel from Tel Aviv to Yerushalayim.

Friedman explained that several processes must be completed prior to this move, saying the timetable depends mainly on Israel, but made it clear that Washington does not plan to impose any new conditions for the move.

“When the mapping process is over, when the Israeli government agrees to freeze building in the same parts of Area C that aren’t designated for the application of sovereignty and when the prime minister agrees to negotiate with the Palestinians on the basis of the Trump plan — and he already agreed to this from the first day — we’ll recognize Israel’s sovereignty in areas that according to the plan will be a part of it,” Friedman said.

He stressed that the key element in applying Israeli law to these areas is that Israel has to be the one to make the move.

It’s not the U.S. that is declaring sovereignty but the Israeli government. Once it does, the U.S. is ready to recognize it, he explained.

Under the coalition deal between Prime Minister Binyamin Netanyahu’s Likud and the Blue and White party, the next government can begin passing legislation to annex Jewish communities in Yehudah and Shomron and the Jordan Valley after July 1, though the prospective government has yet to be formed.

When asked if the Trump administration will push Israel to recognize a Palestinian state as part of the deal, Friedman said that the only condition with regard to this issue is that the prime minister – regardless of who that may be – agrees to negotiate with the Palestinians in good faith for four years.

He acknowledged that Netanyahu has given his consent to this condition and that it is the Palestinians who have rejected the idea to negotiate.

While at this time the Palestinian refuse to negotiate with Israel, if they agree to it, for example, in two years, the prime minister is obliged to resume talks under the plan, he explained.

As this condition was set for a limited time frame, the U.S. wants to keep the option of talks on the table for four years, Friedman said.

Friedman said he has come to learn that Israelis – from all walks of life – believe that the plan presented by the Trump administration is the best plan for Israel. The administration understands that just as Americans would never relinquish the area on which the Statue of Liberty stands, even though it’s a very small area, Israel would never agree to give up these strategic places.