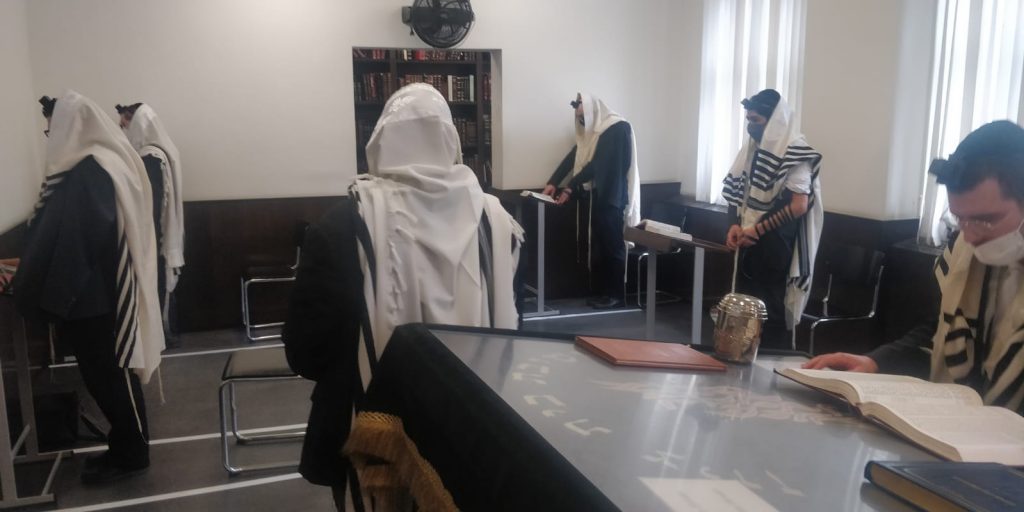 The Federal State of Berlin began allowing gatherings of up to 50 people Monday, with certain stipulations, thus enabling minyanim to resume.

“Davening at home brought a tremendous challenge for our members,” Rabbi Daniel Fabian, of  Kahal Adass Jisroel, told Hamodia. “Minyan influences everything in our lives and brings a strong feeling of achdus for the whole kehillah.”

Shacharis on Monday in Adass Jisroel took place in an atmosphere of tremendous simchah. Three consecutive minyanim of Shacharis were held with Minchah and Maariv twice in the evening.

The minyanim followed social-distancing guidelines. “We had to mark spots for each person; every person his own arba amos,” Rabbi Fabian said. “And of course everyone has to wear masks.”

There were other differences: no shmuzing after davening; at krias haTorah the baal koreh and oleh stood at a distance from each other and hagba’ah and gelilah had to be done differently. But the joy and camaraderie were palpable.

The simchah that Rabbi Dovid Roberts, Rav of Adass Jisroel, felt at having an aliyah was similar to the joy he felt on the day he became a bar mitzvah. “I realized how much we must appreciate that we have the ability to say the brachah ‘asher bachar banu,’ something we took for granted until now.”

“As one of the first or perhaps the first minyan permitted in Europe,” he added, “we have a tremendous achrayus towards the rest of Klal Yisrael, for all those who are yet unable to do so.”

Rabbi Roberts emphasized to his kehillah that the message to take from this is that it is a privilege to daven with a minyan and we must respect it, by being on time for davening and not speaking during tefillah.