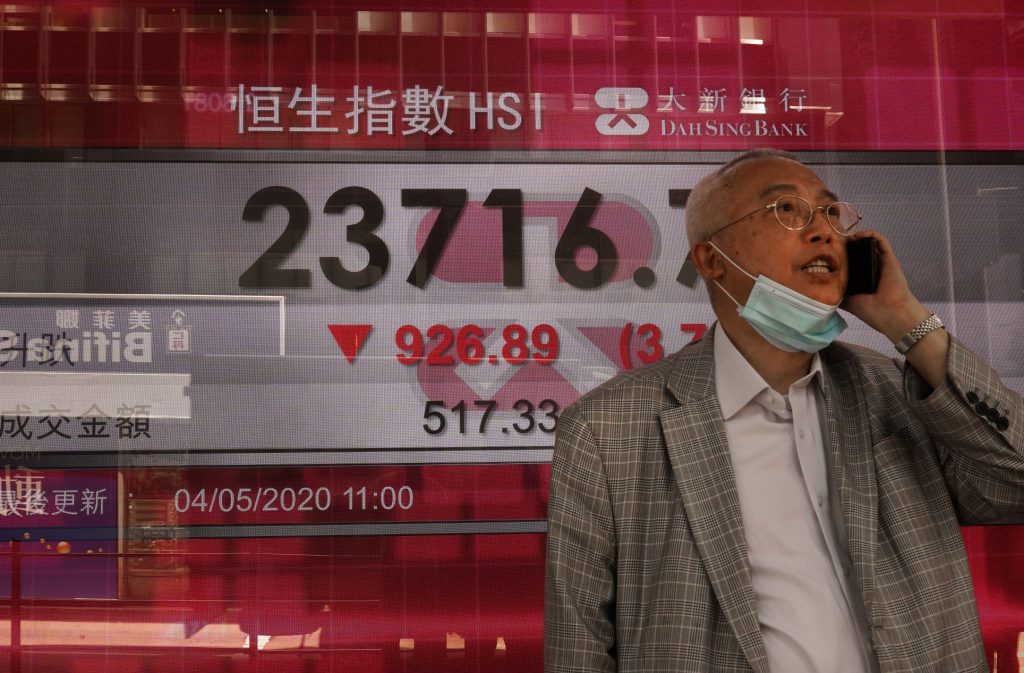 Stock indexes are down slightly in afternoon trading on Wall Street Monday, as the market takes a pause following its best month in decades.

Airline stocks had some of the market’s sharpest losses after famed investor Warren Buffett said he’d dumped all his shares in the four biggest U.S. carriers. A ramping up of tensions between the Trump administration and China over the origins and handling of the coronavirus pandemic also weighed on markets around the world.

But big tech stocks, whose momentum has been nearly unstoppable in recent years, continued to rally and helped the market trim its early losses.

Many professional investors have been skeptical of the market’s huge rally given how much devastation is rolling through the economy. Uncertainty is extremely high about how long the recession will last after businesses shut down worldwide in hopes of slowing the coronavirus pandemic. Even some of Wall Street’s optimists said a pullback for the S&P 500 was overdue after it so quickly more than halved its losses from its February record.

Strategists at Morgan Stanley called such a pullback, which could reach 10%, “a necessary pause that refreshes.” Even while acknowledging the severe recession that everyone sees gripping the world, they say stocks can still resume their climb due largely to “seemingly unlimited central bank support, unprecedented fiscal stimulus” and a possible deceleration in the shocking numbers coming in on the economy.

Monday’s biggest losses were concentrated in airlines, after Berkshire Hathaway disclosed that it sold all its stakes in American Airlines Group, Delta Air Lines, Southwest Airlines and United Airlines. Berkshire Hathaway’s Buffett is one of the stock market’s most famous bargain hunters, and investors around the world parse every clue he gives about investing. Over the weekend, he said he’d made a mistake in how he valued airlines.

Also potentially weighing on markets was Buffett saying that he’s hanging onto his cash and hasn’t made any big deals recently because he hasn’t seen any on attractive terms.

Tech stocks in the S&P 500 rose 0.8%, though, and they make up roughly a quarter of the index by market value, which gives them particularly big sway over the market. Microsoft, the biggest company in the index, rose 2%.

Earlier in the day, markets in Asia and Europe also fell to losses after tensions worsened between the world’s two biggest economies.

Criticized over his handling of the crisis, President Donald Trump has tried to shift the blame to China. Beijing has repeatedly pushed back on U.S. accusations that the outbreak was China’s fault.

The antagonisms threaten the truce in a trade war between Washington and Beijing that was struck just before China began shutting much of its economy down in late January to fight the pandemic.

“We’re still battling with the notions of how and when we’ll bottom and how things will be different at the end of” the pandemic, said Keith Buchanan, senior portfolio manager at Globalt.

Reintroducing a tariff dispute just “adds another worrying point for the market,” he said.

Monday was the first opportunity for France, South Korea and other markets to catch up to the rest of the world, following their closures for holidays last week. Stock markets in Tokyo, Shanghai and Bangkok were among those closed for holidays on Monday.

The yield on the 10-year Treasury note was little changed at 0.64%. It’s still well below the 1.90% it yielded at the start of the year. Yields tend to fall when investors are downgrading their expectations for the economy and inflation.

Benchmark U.S. crude oil rose 61 cents, or 3.1% to settle at $20.39 per barrel. U.S. crude has plunged from its perch of roughly $60 at the start of the year on worries about a collapse in demand and strained storage facilities. Brent crude, the international standard, rose 76 cents, or 2.9% to $27.20 per barrel.

This will be another busy week for markets, with more than 150 companies in the S&P 500 scheduled to report their quarterly results. On Friday, the government will also show how many jobs were lost during April.