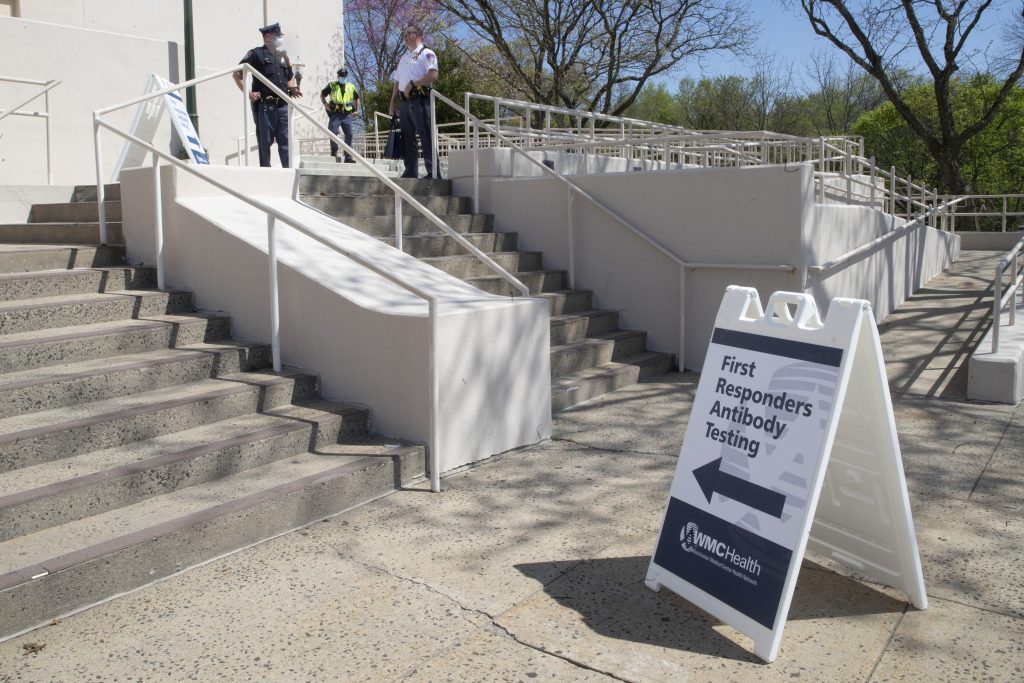 New York City’s mayor rejected calls Monday to stop having police officers enforce social distancing during the coronavirus crisis after one was caught on video pulling a stun gun on a man and violently taking him to the ground; and Gov. Andrew Cuomo laid out criteria for reopening the state’s economy region by region.

Mayor Bill de Blasio called Saturday’s confrontation in Manhattan’s East Village “very troubling” and “absolutely unacceptable,” but contended it was an outlier among “tens of thousands of interactions between police officers and civilians over the last weeks that went very well.”

The officer was stripped of his gun and badge and placed on desk duty pending an internal investigation.

The police department assigned 1,000 officers to social distancing patrols over the weekend as New Yorkers ventured outside to enjoy warm weather. They’ll also be part of a new effort to distribute 7.5 million protective masks over the next few weeks.

“You can’t do effective enforcement without the NYPD and the NYPD is more than up to the job,” Mayor de Blasio said.

Bystander video posted on social media showed plainclothes officer Francisco Garcia slapping 33-year-old Donni Wright in the face, punching him in the shoulder and dragging him to a sidewalk after leveling him in a crosswalk.

Police spokesperson Sgt. Mary Frances O’Donnell said Wright “took a fighting stance against the officer” when he was ordered to disperse.

A few minutes earlier, officers arrested two other people on the same block for allegedly failing to comply when asked to disperse.

Police Commissioner Dermot Shea said Monday that officers recovered a stun gun that may have belonged to one of the people, a small amount of an illegal substance and close to $3,000 in cash.

“Exactly what was going on there is still somewhat under investigation,” Shea said.

Joo-Hyun Kang, the director of the police watchdog Communities United for Police Reform, said: “Public health professionals and community organizations, not the NYPD, should be responsible for educating New Yorkers about the importance of social distancing and creating new norms.”

Tina Luongo, a lawyer with the Legal Aid Society, said the city needs to “seriously reconsider social distancing enforcement that leads to escalations involving the use of tasers and violent assaults.”

Even the head of the city’s largest police union said officers “should get out of the social distancing enforcement business altogether.”

Pat Lynch, the president of the Police Benevolent Association, called the situation “untenable” and blamed city leaders for “vague guidelines and mixed messages, leaving the cops on the street corners to fend for ourselves.”

“Nobody has a right to interfere with a police action. But now that the inevitable backlash has arrived, they are once again throwing us under the bus,” Lynch said in a statement after de Blasio spoke Monday.

Wright was arrested on charges including assault on a police officer and resisting arrest, but the Manhattan district attorney’s office said it would defer prosecution pending further investigation.

Despite the latest fiasco, de Blasio said the police department has made great strides overall in reducing its use of force in recent years by training all its officers in de-escalation techniques and by building stronger relationships within communities.

“What you saw there is more and more of a rarity,” de Blasio said at a news conference Monday. “We have work to do, unquestionably, but the progress is very clear to see.”

The number of people dying from coronavirus in the state dipped again, to 226 fatalities Sunday, Gov. Cuomo said. That’s the fewest number of deaths in a day since March 28, when 237 people died.

Gov. Cuomo said some parts of the state could start to reopen as early as May 15 if local governments provide plans for testing for the coronavirus and tracing the contacts of those who have been infected, and if data provided by hospitals and health officials shows the regions are not at high risk of a new COVID-19 surge.

The five regions of the state that are getting closer to becoming eligible to open under the criteria are central New York, the Finger Lakes, the Mohawk Valley, the North Country and the Southern Tier.

Those regions, which have had far fewer COVID-19 cases than New York City and its surrounding suburbs, meet some of the criteria for reopening that Cuomo laid out Monday, including an ample supply of empty hospital beds that would be available in case there is a unanticipated surge in new infections.

But no region of New York appears to meet Cuomo’s reopening requirement of 30 contact tracers per 100,000 residents. It’s unclear when New York will fully roll out Cuomo’s plan to hire an “army” of workers who can track people infected with COVID-19 and their contacts through a partnership with Bloomberg Philanthropy.