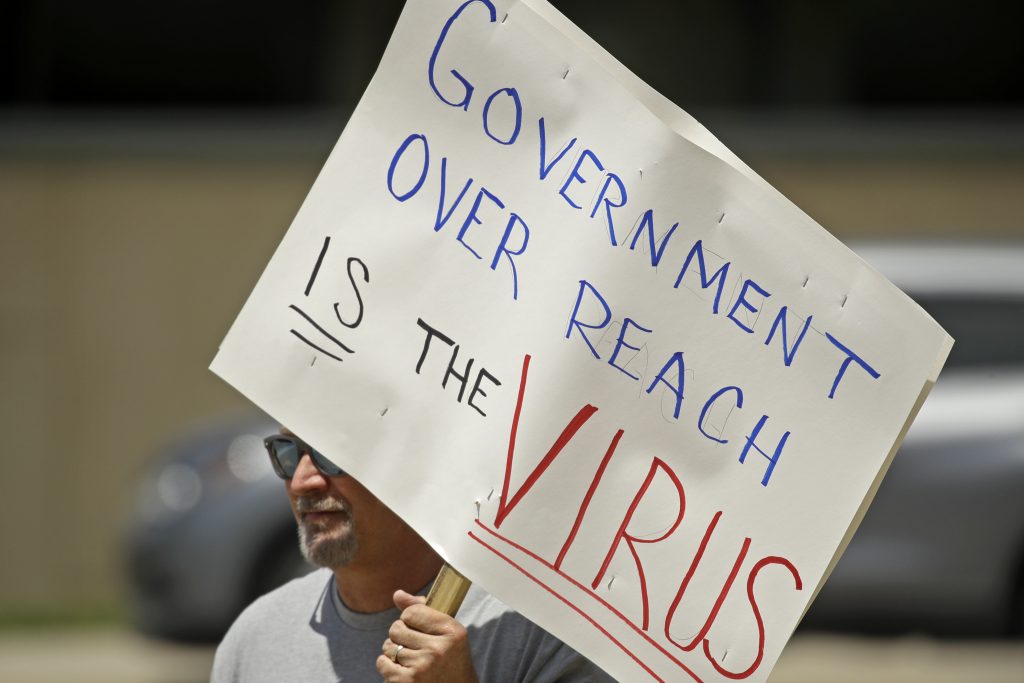 The demonstrators may unknowingly pass on the coronavirus to others, such as their vulnerable and elderly family members, Birx told Fox News host Chris Wallace.

Protesters have gathered outside state capitols across the country in recent weeks, including in Michigan, where demonstrators criticized the safety orders issued by Gov. Gretchen Whitmer.

Wallace asked Birx whether the patchwork of stay-at-home measures put in place by many states, as opposed to a federally led effort, causes confusion among people about what rules to follow. She defended the federal guidelines, saying that some areas are more affected by the virus than others.

Wallace asked Birx to advise viewers on a host of activities, including protesting and going to the beach. She insisted that it was up to states to decide on whether to reopen but cautioned that people should be prudent, even as they are able to go outside.

Birx said going to a salon or barbershop “is not a good Phase 1 activity” even if the customers and staff are wearing masks. She said protocol for reopening and visiting beaches should depend on whether people are observing social distancing.

Secretary of State Mike Pompeo claimed Sunday that “enormous evidence” indicates that the covid-19 virus originated at a laboratory in Wuhan, China.

“Remember, China has a history of infecting the world, and they have a history of running substandard laboratories,” Pompeo said on ABC News. “These are not the first times that we’ve had a world exposed to viruses as the result of failures in a Chinese lab.”

The U.S. intelligence community declined last week to specify the origin of the virus, saying it would “continue to examine” whether the outbreak began with an accident at the lab or through human contact with infected animals being sold at a public market.

Pompeo’s comments echoed those of President Donald Trump, who said he has seen evidence giving him a “high degree of confidence” that the virus came from the Wuhan Institute of Virology, which was studying the presence of the virus in bats.

“There’s enormous evidence that that’s where this began,” Pompeo said.

The secretary of state also said, twice, that he had “no reason to disbelieve” that the virus was “man-made or genetically modified.” Reminded that the Office of the Director of National Intelligence has said that the scientific consensus is that it was neither, Pompeo said, “That’s right. I agree with that.”

Amid criticism of its response to the virus, the administration, with Pompeo as its point man, has said that the pandemic never would have happened, or would not have been so extensive, had China not “attempted to conceal and hide and confuse. It employed the World Health Organization as a tool to do the same,” Pompeo said.

“I think the whole world is united in understanding that China brought this virus to the world,” he said. Asked whether he thought China “intentionally released” the virus, Pompeo said, “I don’t have anything to say about that. I think there’s a lot to know. But I can say this. We’ve done our best to try and answer all of those questions.”

Pompeo noted that American and other international scientists have not been allowed to visit the Wuhan laboratory and that China has still not provided a sample of the original virus.

“Had those scientists been operating in America, they would have put this out,” he said. “There would have been an exchange of ideas. And we would have quickly identified the kinds of things that needed to be done in response.”

Ohio Gov. Mike DeWine said Sunday that he reversed course on requiring Ohioans to wear masks because people “were not going to accept the government telling them what to do.”

“It became very clear to me after we put out the order that everyone in retail who walked into a store as a customer – it became clear to me that was a bridge too far,” DeWine, a Republican, said on “This Week.”

He added: “It just wasn’t going to work. You got to know what you can do and what you can’t do.”

Asked further about polls showing that Republicans were less willing to abide by social distancing recommendations, DeWine said he wasn’t familiar with the findings, but he cited the ideological differences between the GOP and the Democratic Party.

Whitmer said Sunday morning on CNN that the recent demonstrations at the State Capitol are “not representative of who we are in Michigan.”

On Thursday, protesters gathered in Lansing to oppose the state’s stay-at-home order, which Whitmer later extended through May 15. Some of the protesters carried assault rifles, nooses, Confederate flags and swastikas.

“Some of the outrageousness of what happened at our Capitol this week depicted some of the worst racism and awful parts of our history in this country,” Whitmer, a Democrat, said on CNN. ” … The behavior that you have seen in all of the clips is not representative of who we are in Michigan. And the fact of the matter is, I mean, we’re in a global pandemic. This isn’t something we just negotiate ourselves out of, and it’s a political matter.”

Michigan is one of the hardest-hit states in the country, with more than 4,000 reported coronavirus deaths and more than 43,200 confirmed cases. Whitmer called the pandemic a “public health crisis” and said officials must “keep listening to the epidemiologists and experts, and not listen to the partisan rhetoric or these political rallies, or tweets, for that matter. We have to keep doing the right thing, the next right thing.”

She said the demonstrators are “a small group of people” and not representative of Michigan’s nearly 10 million people, “the vast majority of whom are doing the right thing.”

“Whether you agree with me or not, I’m working to protect your life if you live in the state of Michigan,” Whitmer said on CNN. “I’m going to continue to do my job, regardless of what tweets come out or what polls come out or what people think … makes sense. We’re going to listen to facts and science, because we have got to get this right.”

Gov. Tate Reeves said he wants to reopen Mississippi as soon as possible, despite what he characterized as a “one-day blip” after coronavirus cases soared over a 24-hour period last week.

Reeves, a Republican, said during a news conference on Friday he had intended to announce a relaxing of safer-at-home orders but instead shared the news that there were 392 cases in the state in the past 24 hours.

On Fox News, Reeves told host Wallace that the state had since analyzed the data and found the number of cases appeared higher because more tests were done. He said that finding led him to conclude the state could further relax social distancing requirements, beyond his earlier announcement that retail stores could reopen beginning April 27.

Reeves has said he wants the entire state to open “as soon as possible” but has not provided definitive plans.

“What we found was it was really a data dump,” Reeves explained on the Fox News show.

Showing a graphic illustrating that the daily increase in the number of cases in Mississippi throughout April remained in the 200s, Wallace questioned whether Reeves should consider reopening since the state’s cases haven’t declined over the past two weeks. The White House has recommended states reopen only after their numbers show a decrease over two weeks.

“Mississippi is different than New York,” Reeves responded, adding that his state’s hospitals aren’t at capacity. He said he has spoken to Deborah Birx, coordinator of the White House coronavirus task force, and that they agreed Mississippi has never had an extreme outbreak.

When asked about the protesters who gathered at the state’s capitol last weekend, Reeves said most of the demonstrators had voted for him in the last election and that he relates to their frustrations with the economic downturn that closures have caused.

“I understand, and I feel their pain,” he said. “We’re doing everything in our power to get our state opened as soon as possible.”

Reeves said case numbers have been low throughout the weekend. He said he will report later Sunday that the state had fewer than 110 cases in the past 24 hours.

Trump on Sunday expressed support for a Maine brewpub owner whose health license was seized last week after he reopened in defiance of a state order.

“Many complaints coming in about Maine,” the president tweeted alongside a blog post about the Bethel restaurant, Sunday River Brewing Company. “I love that State, won Maine 2 – Don’t make the cure worse than the problem itself. That can happen, you know!”

Trump has often proclaimed that the cure for the pandemic should not be “worse than the problem” as he has lobbied for states to restart their economies. His statement that he “won Maine 2” references his winning Maine’s 2nd Congressional District, where Bethel is located, in the 2016 presidential election.

The state Bureau of Alcoholic Beverages and Lottery Operations said Savage was violating the agency’s rules, and state officials then entered the pub and took its health license, the Sun Journal reported. Without a health license, the newspaper reported, the pub also cannot have a liquor license.

Sunday River Brewing announced Friday after its license was seized it would close, effective that day, but the Sun Journal said the pub was still open at 10 p.m.