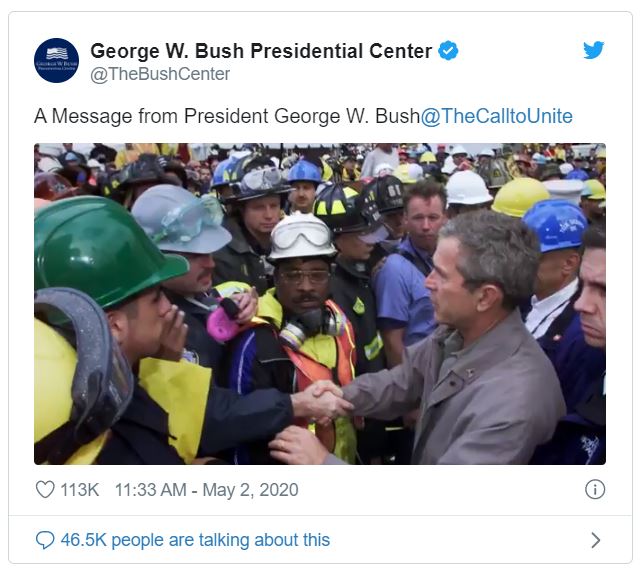 Former President George W. Bush tweeted a three minute video in which he called on Americans to put aside partisan differences, heed the guidance of medical professionals and show empathy for those stricken by the coronavirus and the resulting economic devastation.

“Let us remember how small our differences are in the face of this shared threat,” Mr. Bush said in the video. “In the final analysis, we are not partisan combatants. We are human beings, equally vulnerable and equally wonderful in the sight of G-d. We rise or fall together and we are determined to rise.”

President Trump seemed to take the message as a rebuke and lashed out at President Bush on Sunday saying, “Oh bye the way, I appreciate the message from former President Bush, but where was he during Impeachment calling for putting partisanship aside.”

Mr. Trump added, “He was nowhere to be found in speaking up against the greatest Hoax in American history!”

Mr. Bush’s message was part of a series of videos aired online as part of a 24-hour live-streamed project, “The Call to Unite,” that also featured other prominent American entertainment and political personalities.

Former President Bill Clinton delivered a message as well, saying, “We need each other, and we do better when we work together. That’s never been more clear to me as I have seen the courage and dignity of the first responders, the health care workers, all the people who are helping them to provide our food, our transportation, our basic services to the other essential workers.”

Unlike his predecessors who made a point of enlisting former occupants of the White House from both parties in times of crisis to demonstrate national resolve and unity, Mr. Trump has declined to call on former presidents to help bring the country together during the pandemic.

Mr. Trump dismissed the idea, saying “I don’t think I’m going to learn much. I guess you could say that there’s probably a natural inclination not to call.”

Mr. Bush has never been a fan of President Trump, who defeated his brother, Jeb Bush, for the nomination in 2016 and has lambasted the 43rd president’s record repeatedly. While disturbed by Mr. Trump’s leadership, Mr. Bush has largely kept quiet, with the notable exceptions of a eulogy for Senator John McCain which was seen as an implicit rebuke of the incumbent.