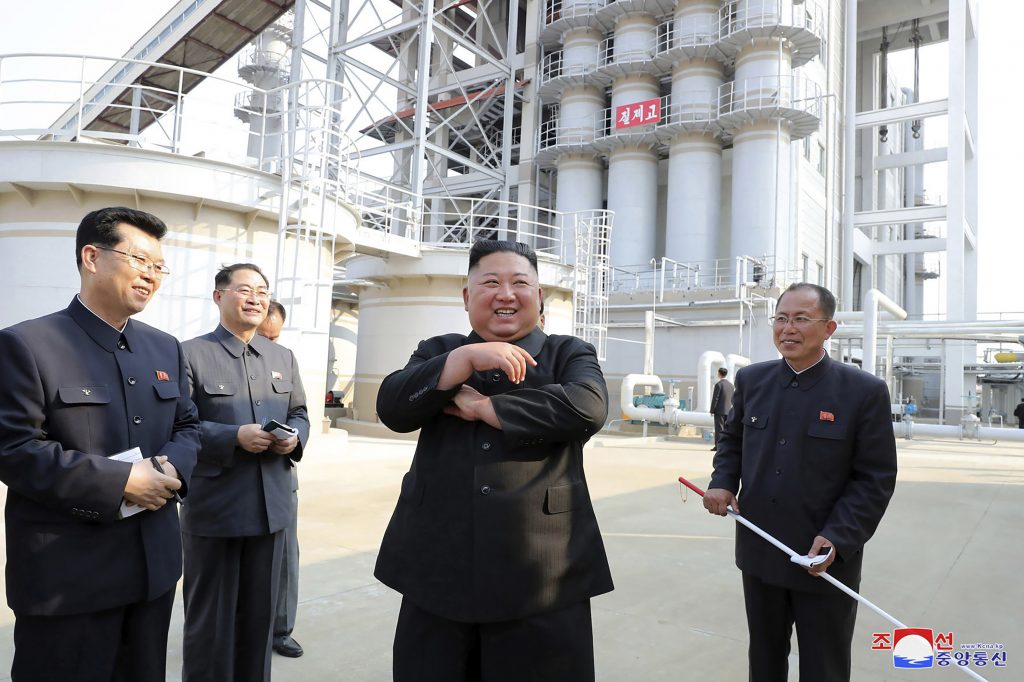 After weeks of intense speculation about the health of Kim Jong Un, state news agency KCNA said on Saturday the North Korean leader attended the completion of a fertilizer plant north of Pyongyang, the first report of his appearance since April 11.

Reuters could not independently verify the KCNA report.

KCNA said Kim cut a ribbon at the ceremony on Friday and those attending the event “burst into thunderous cheers of ‘hurrah!’ for the Supreme Leader…”

Kim was seen in photographs smiling and talking to aides at the ribbon-cutting ceremony and also touring the plant. The authenticity of the photos, published on the website of the official Rodong Sinmun newspaper, could not be verified.

The United States strongly believes Kim is alive, according to a U.S. government source familiar with intelligence reporting, but has not been able to confirm that the photos of Kim were taken at Friday’s event or explain why he had not been seen for weeks.

Asked about the KCNA report on Kim on Friday, President Donald Trump said he would “rather not comment on it yet.” The White House and State Department provided no update on Saturday on what they knew about Kim.

Many in the large crowd of people at the event, described as officials of the army, the ruling party and the community who worked on the project, were wearing face masks and standing some distance from the podium where Kim and his aides took part in the ceremony.

North Korea has not reported any cases of the coronavirus and has said it has been taking tough measures to prevent an outbreak. One suggested reason for Kim’s absence is that he may have been taking precautions against the coronavirus.

Speculation about Kim’s health has been rife after he missed the birth anniversary celebrations of state founder Kim Il Sung on April 15. The day is a major holiday in North Korea and Kim as leader usually pays a visit to the mausoleum where his grandfather lies in state.

He last made a public appearance on April 11 attending a meeting of the ruling Workers’ Party politburo.

Following his absence from the anniversary, a South Korean news outlet specializing on the North reported that Kim was recovering after undergoing a cardiovascular procedure. A flurry of other unconfirmed reports about his condition and his whereabouts followed.

Officials in South Korea and the United States expressed skepticism about the reports.

State media footage on Saturday showed Kim’s leg movements appearing stiff and jerky and one of the images showed a green golf cart in the background, similar to one he used in 2014 after a lengthy public absence.

“Preparing desks and chairs on the stage seemed a bit rare for such an outdoor occasion,” Nam Seong-wook, a professor of North Korean studies at Korea University, said of the ceremony.

“Kim might have some physical conditions that prevent him from standing too long and he needs to be seated after standing up for a while.”

Nam said if Kim is unable to stand for long periods that may be the reason he did not attend the anniversary event in April at the Kumsusan Palace of the Sun, where he would have had to stand for at least about an hour.

The city of Sunchon where the fertilizer factory was built is about 30 miles north of Pyongyang in the western region, away from Wonsan, the eastern coastal resort where South Korean and U.S. officials have said Kim may have been staying.

Satellite images showing a train usually used by Kim near the Wonsan resort, as well as boats often used by Kim and his entourage, suggested he may be staying there.

Officials in South Korea and the United States have said Kim may be there to avoid exposure to the coronavirus, and have expressed skepticism about media reports that he had some kind of serious illness.

The former top U.S. diplomat for East Asia, Daniel Russel, said the pieces of the puzzle of Kim’s disappearance would take time to assemble.

His reappearance showed that authoritative information about the well-being and whereabouts of the North Korean leader were very closely guarded, and rumors about him needed to be regarded with considerable skepticism, Russel said.

The rumors had, however, served to focus attention on North Korea‘s succession plan, which “in a monarchical and cult-like dictatorship is filled with risk, and the absence of a designated adult heir compounds that risk many times over,” Russel said.

South Korean Unification Minister Kim Yeon-chul, who oversees engagement with Pyongyang, said it was plausible Kim was absent as a precaution over the coronavirus pandemic, in view of the stringent steps taken to head off an outbreak in the country.

Harry Kazianis, senior director of Korean studies at the Center for the National Interest think-tank in Washington, said this still could be the case.

“The most likely explanation for Kim’s absence is with North Korea declaring the coronavirus pandemic an existential threat … he most likely was taking steps to ensure his health or may have been impacted in some way personally by the virus,” Kazianis said after the KCNA report.

Kim’s reported appearance at the fertilizer plant is the latest signal to domestic audiences that he is watching out for their economic and food well-being, but nuclear analysts believe it is likely a part of the North’s covert uranium enrichment efforts.

There is strong evidence of the Sunchon phosphate fertilizer plant’s involvement in uranium extraction, pointing to its dual use, according to a recent report by the James Martin Center for Nonproliferation Studies in Monterey, California.