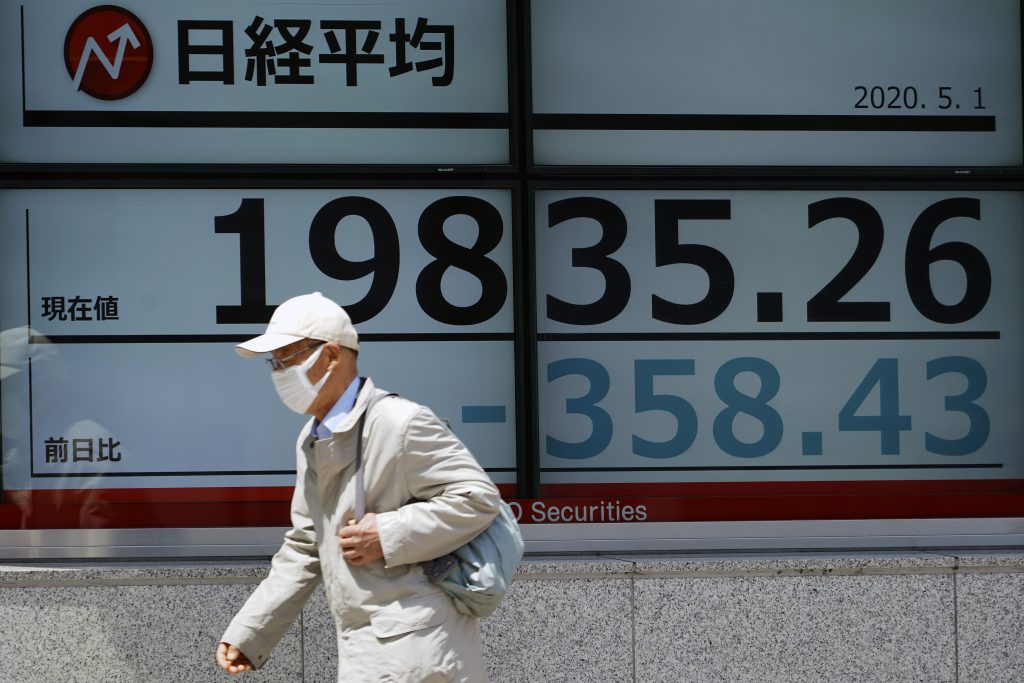 Stocks are falling in midday trading on Wall Street Friday after Amazon and other big companies laid out how the coronavirus pandemic is hitting their bottom lines.

The S&P 500 was down 2.9%, following losses in London and Tokyo. Treasury yields ticked higher, while crude oil prices continued to yo-yo.

Amazon sank 8.5% after it reported profit for the latest quarter that fell short of Wall Street’s forecasts. It also said it will spend billions of dollars this quarter to pay workers overtime, buy masks for them and make other investments. Its movements have outsized sway on the S&P 500 because it’s the third-largest company in the index. Amazon alone accounted for one-seventh of the S&P 500’s loss for the day.

Exxon Mobil fell 6.1% after it said it swung to a loss of $610 million last quarter. It had to write down the value of its inventories by $2.9 billion amid a collapse in energy prices as airplanes, automobiles and workplaces worldwide suddenly went idle in the spring.

Exxon Mobil helped drive energy stocks across the S&P 500 to a 6.4% loss, the largest among the 11 sectors that make up the index.

Shares of electric car and solar panel maker Tesla Inc. sank 11.2% after CEO Elon Musk tweeted that the price was too high. In a series of tweets just after 11 a.m., Musk said he was selling nearly all of his physical possessions and would not own a house. Then he wrote that “Tesla stock price is too high imo.” After that he tweeted that people should be given back their freedom, in another protest of government stay-home orders to slow the spread of coronavirus. Then he posted parts of the U.S. national anthem.

The tweets came as Musk was getting close to getting a big payout from the company for meeting certain metrics including that the company’s market value averaging over $100 billion for six months. Even with Friday’s decline, the market value was $129.5 billion.

The S&P 500 gave up its gain for the week and is now headed for its second straight weekly loss.

Stocks have been rallying recently as economies around the world lay out plans to relax stay-at-home orders and as hopes rise that a possible drug treatment for COVID-19 may be on the horizon. They added to earlier gains sparked by massive aid promised by the Federal Reserve and Congress, and the U.S. stock market just closed out its best month in 33 years.

The U.S. stock market has more than halved its sharp losses from its February record into late March, triggered by worries about a sudden, devastating recession.

Many professional investors say the rally has been overdone given how much uncertainty still exists about how long the recession will last. If U.S. states and nations around the world reopen their economies prematurely, it may lead to additional waves of infections, which could mean more business closures, layoffs and economic devastation.

In Japan, the government is keeping social distancing measures in place to prevent a resurgence of infections.

Australia’s market was one of the few others open Friday, and its S&P/ASX 200 plunged 5% with heavy losses in miners and banks. A measure of Australian manufacturing showed activity contracting at its worst pace since 2009.

The yield on the 10-year Treasury was little changed at 0.62%. It’s still well below the roughly 1.90% level where it was at the start of the year. Longer-term Treasury yields tend to move with investors’ expectations for the economy and inflation, and a Friday report showed that U.S. manufacturing plunged in April, but not as severely as economists were expecting.

Benchmark U.S. crude oil rose 0.8% to $18.99 per barrel after swinging between $18.07 and $20.48 earlier in the morning. They’re the latest severe swings for U.S. crude, which has plunged from its perch of roughly $60 at the start of the year on worries about a collapse in demand and strained storage facilities.