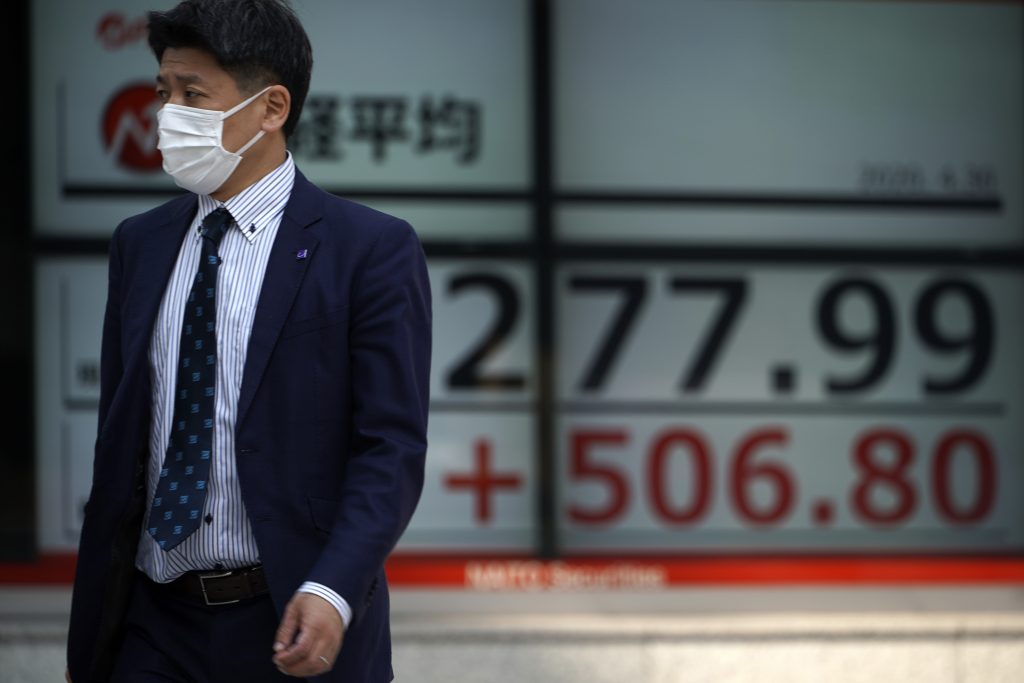 Wall Street pulled back on Thursday after more reports made clear the worldwide devastation the coronavirus outbreak is causing for the economy.

In the United States, another 3.8 million workers filed for unemployment benefits last week as layoffs continue to hammer the country. In Europe, the region’s economy crumpled by the sharpest degree in at least 25 years.

The dour figures helped drive most U.S. stocks to losses, and the S&P 500 was down 1.3% at one point, though it quickly halved the loss on strength for Facebook and a handful of other big companies that reported encouraging results. Treasury yields were also lower, while European stocks fell more sharply, slamming the brakes on a strong rally that had circled the world a day earlier.

“This is the saddest day for the global economy we have ever seen” in the 50 years that economists at High Frequency Economics have been following economic data, they wrote in a report. “The statistical offices of the economies we watch pumped out 19 economic reports overnight. They revealed historic declines of activity and surging unemployment on a scale we have never seen before. We are sad.”

Even with Thursday’s losses, the S&P 500 is still on track to close out its best month in decades. Stocks have surged since late March on the promise of massive amounts of aid for the economy and markets from the Federal Reserve and Congress. More recently, some U.S. states and nations around the world have laid out plans to relax restrictions that were meant to slow the spread of the virus but also suffocated businesses and jobs.

Because of that, some investors have essentially written off a horrific few months of corporate profits and economic data, and they’re focusing instead on the prospect of growth returning later this year. The S&P 500 is up 12.8% for April. Depending on where it is at the end of the day, it will close out its best monthly performance since either 1987 or the mid-70s.

Some big tech titans reported results for the first quarter that weren’t as bad as investors had braced for, which helped to limit the market’s losses.

Facebook rose 5.3% after its revenue topped Wall Street’s expectations. It also said that after a steep drop-off in advertising revenue during March, it saw some stabilization in the first three weeks of April. Ad revenue was roughly flat from a year earlier, defying Wall Street’s worst fears.

Microsoft was also up 1.1% after reporting better-than-expected results for the first quarter. Those two companies alone make up 7.5% of the entire S&P 500 by market value, giving them outsized effects on broad market indexes.

But four out of five stocks in the S&P 500 fell after reports showing the economic and financial pain piled even higher.

Besides the jobless figures in the United States, which brought the total to 30 million in just six weeks, data released Thursday showed that consumer spending plunged 7.5% in March from the prior month. That’s crucial because consumer spending makes up 70% of the entire economy.

McDonald’s fell 1.6% after its earnings for the latest quarter fell short of Wall Street’s expectations. Even at its restaurants that have reopened, the company said customers have been slow to return to their old routines from before the pandemic. In China, which was the first country hit by the outbreak, 99% of restaurants are back operating again, but demand has not returned to the same levels.

Among European countries that use the euro currency, the economy shrank by 3.8% in the first three months of the year from the quarter before. That’s the biggest contraction since records began in 1995.

The European Central Bank is promising to support the economy through the pain, and on Thursday it lowered the interest rate on long-term loans it provides to banks. It also offered a raft of new credit lines to banks at a quarter percentage point below its main interest benchmark, which is zero.

Many professional investors have been skeptical of the stock market’s big rally over the last month. Even though some encouraging numbers have come out about the outbreak, it’s still uncertain how long this recession will last and whether new waves of infections could hit.

Other areas of the market, from bonds to commodities, have been showing more pessimism.

In another sign of caution, the yield on the 10-year Treasury dipped to 0.60% from 0.62% late Wednesday. It started the year at close to 1.90%, and Treasury yields tend to fall when investors are downgrading their expectations for the economy and inflation.

Benchmark U.S. crude oil continued its extreme swings, jumping 20.6% to $18.16 per barrel. It’s still way below the roughly $60 level where it started the year as worries pile up about the effects of a collapse in demand. Brent crude rose 9% to $26.42.