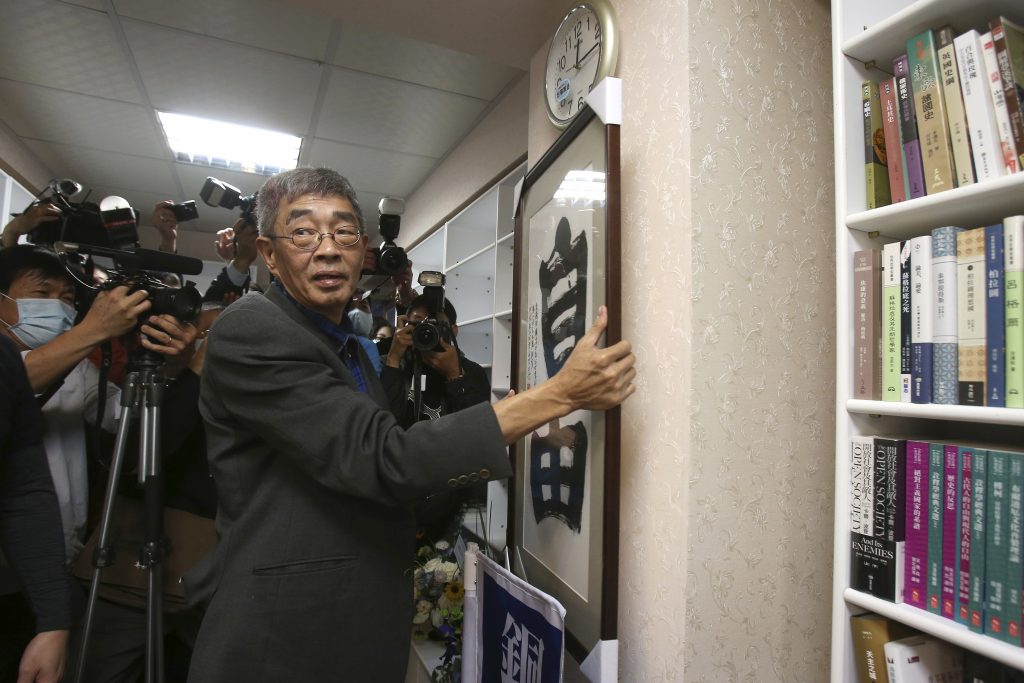 Very few governments around the world are likely to emerge from the pandemic in an even stronger position than before. Taiwan is one of them — and that’s not good for China.

Taiwan was forced to contain the outbreak without official help from the World Health Organization and other international bodies, thanks to China’s longstanding push to isolate the democratically ruled island that it claims as its territory. For weeks, leaders in Taipei struggled to evacuate residents from the virus epicenter in Wuhan, as Beijing rejected basic conditions such as having Taiwanese medical personnel aboard the aircraft.

Around the same time, the People’s Republic of China flew bombers and fighter jets around the island, prompting President Tsai Ing-Wen to scramble warplanes.

Despite those hurdles, Taiwan has led the world in its fight against the virus, with only about 400 infections and six deaths for a population of 23 million. By comparison, New York State — with slightly fewer people — had almost 300,000 cases and more than 22,000 deaths.

Taiwan’s success against COVID-19 has shown that democracies could fight the virus without resorting to authoritarian measures, serving as a key rebuttal against Chinese propaganda showcasing the strength of its system against the West. Taipei’s openness also contrasted sharply with the lack of transparency about the initial outbreak and subsequent diplomatic pressure from Beijing, generating goodwill that could pay dividends in the future.

“I can’t think of another issue with such global resonance that has broken so favorably for Taiwan, and so negatively for the PRC, since perhaps the Tiananmen Square massacre,” said Kharis Templeman, an adviser to the Project on Taiwan in the Indo-Pacific at Stanford University’s Hoover Institution.

While the overall geopolitical dynamics were unlikely to change much given China’s growing economic clout, Taiwan’s “international stature has done well out of this crisis,” Templeman said. “Taiwan has been dealing with Chinese opacity and propaganda campaigns for decades. So there’s definitely some rise in sympathy for Taiwan.”

A call this week between Taiwan’s health minister and the Trump administration’s top health official served to reinforce the island’s importance to the global community, while also signaling that it could become a point of tension between the U.S. and China. Support for Taipei has surged in Washington after President Donald Trump held an unprecedented 2016 phone call with Tsai, launched a bruising trade war against Xi Jinping’s government and sold Taiwan long-coveted F-16 fighter jets.

China’s foreign ministry objected to the latest phone call, demanding that the U.S. “immediately correct its mistake, stop manipulating the Taiwan issue by taking advantage of the pandemic, and stop official contacts with Taiwan.” The ministry urged “the U.S. side to adhere to one-China principle,” referring to Washington’s long-held position that the PRC is China’s sole legal government.

Last year, Xi reaffirmed Beijing’s desire to govern Taiwan under the same “one country, two systems” framework as the former British colony of Hong Kong. That position is deeply unpopular in Taiwan, which reelected Tsai in a landslide in January. Tsai’s Democratic Progressive Party views Taiwan as a sovereign, independent nation.

For the moment, Taiwan is basking in the glow of international praise. It’s won plaudits for not only stemming infections, but also pledges to ship millions of surgical masks to Europe, the U.S. and its few remaining diplomatic allies around the world that China hasn’t picked off. Taipei has also held virtual seminars with countries such as India and the Philippines, according to Wang Ting-yu, a lawmaker in Tsai’s party and member of Taiwan’s foreign affairs and national defense committee.

“This year will be the closest moment for Taiwan to participate in international organizations,” Wang said. “Not only have we shown our capability to stop the virus from spreading, we’re also using democracy to stop it from spreading — we’re communicating with our people and the government and the people are on the same side fighting the virus. This message can provide a reference for the world.”

In some ways, Taiwan’s adversity also helped underwrite its response. Taipei has little room for error because it can’t seek help from multilateral agencies and Beijing would pounce on any missteps, said Rupert Hammond-Chambers, a managing director at the consultancy Bower Group Asia.

“Today, Taiwan’s standing is at a historic high,” said Hammond-Chambers, who is also president of the U.S.-Taiwan Business Council. Still, he added, over the longer term “the stark reality of the PRC’s financial muscle and heavy-handed political strategies will mitigate much of the positive equity Taiwan has built amongst nations.”

The pandemic served as an ideal springboard for Taiwan’s long-standing campaign for diplomatic inclusion. A high-profile exchange between a journalist and WHO official Bruce Aylward, who repeatedly tried to avoid mentioning Taiwan, “did a great job of highlighting the silliness of excluding what is effectively a nation of 23 million people from important international bodies,” said Graeme Smith, a fellow at the Australian National University who researches China’s influence across Asia.

China’s veto power in many international bodies is likely to continue to keep Taiwan on the outside looking in,” said Shelley Rigger, a political science professor at Davidson College and author of Why Taiwan Matters: Small Island, Global Powerhouse. Still, she said, the favorable attention Taiwan was earning would still have an impact.

“It does matter, because if things get ugly, Taiwan will benefit from a positive image and high profile,” Rigger said. “And if opportunities to loosen Beijing’s stranglehold on its international space do appear, Taiwan needs for people around the world to respond quickly to take advantage of them.”