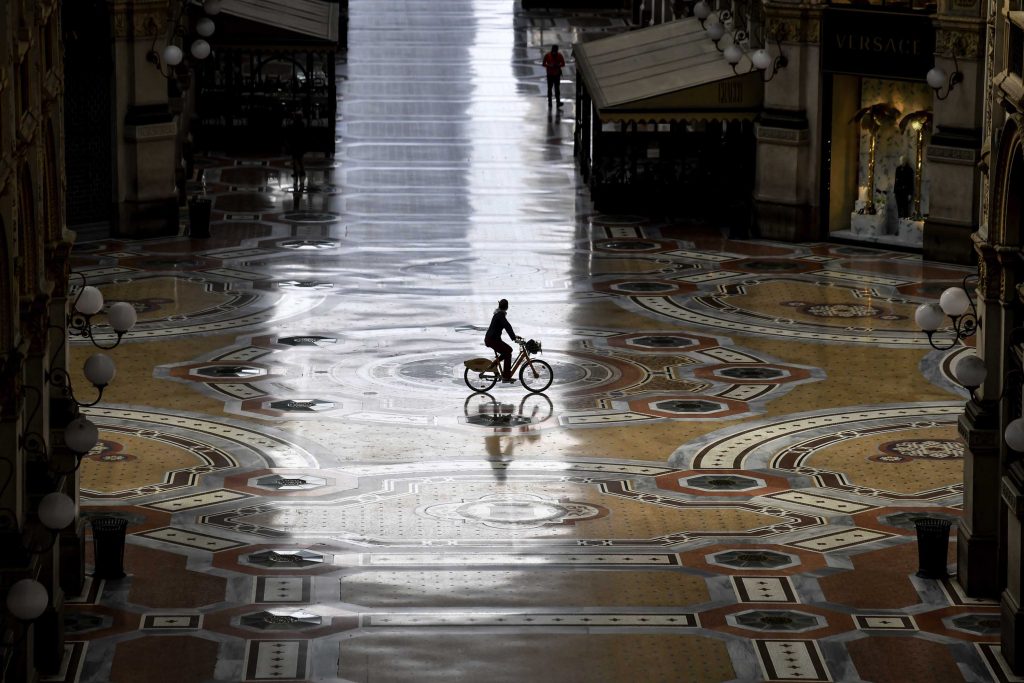 The world’s economic pain was on full display Thursday as Europe and the United States were releasing more evidence of the devastation wrought on jobs and economies by coronavirus lockdown measures.

In Europe, where over 132,000 people with the virus have died so far, fears about new infection spikes were tempering hopes that economies now on government-funded life support will regain their vigor as workers return to factories, shops and offices.

New unemployment figures Thursday covering the 19 European countries that use the shared euro currency underscored how massive job-protection programs are temporarily keeping millions of Europeans on payrolls, sparing them the record-setting flood of layoffs battering tens of millions of Americans.

The European economy shrank a record 3.8% in the first quarter as hotels, restaurants, construction sites and manufacturing facilities were frozen by coronavirus shutdowns. It was the biggest drop in the eurozone since statistics began in 1995 and compares to a 4.8% contraction in the United States.

Lockdowns that turned major European cities into ghost towns are plunging nations into recession. France’s economy shrank an eye-popping 5.8% in the first quarter, the biggest quarterly drop since 1949, and the Spanish economy shrank 5.2% in the same period.

Italy’s government debt rating was cut this week to just above junk bond status, with the Fitch ratings agency expecting the Italian economy to shrink 8% this year. Germany, the eurozone’s biggest economy, is projecting a 6.3% drop in GDP this year.

No region in the world is being spared. A new report from the Paris-based International Energy Agency projected an unprecedented plunge in the global demand for energy this year that will be equivalent to losing the entire energy demand of India, the world’s third-largest energy consumer.

The pain of coronavirus lockdowns has piled huge pressures on governments to ease them. The World Health Organization said nearly half of the 44 countries in Europe that put partial or full restrictions on movement have started easing them and 11 more will do so in the coming days.

But as economies sputter back to life and workers adapt to the strangeness of new barriers designed to keep them apart, governments are watching infection rates and public behavior like hawks, wary of a second wave of deaths.

German Health Minister Jens Spahn said his government wants to take “small steps, rather than risk a big step back.”

California’s governor planned to close all beaches and state parks starting Friday after people thronged the seashore during a sweltering weekend, ignoring social distancing orders. Nevada’s governor was extending his directive asking people to stay at home until May 15 but on Friday eased restrictions on some outdoor activities and businesses.

The promise of an effective treatment against the coronavirus — an experimental drug that can speed the recovery of COVID-19 patients — raised hopes Thursday for faster progress in battling the pandemic and restoring wrecked economies and livelihoods.

The U.S. government and others are working to make the medication available to patients as quickly as possible. News of the medical advance lifted world markets, outshining gloomy economic data showing the U.S. economy contracted nearly 5% in January-March in the worst downturn since the Great Recession.

California-based biotech company Gilead Sciences and the U.S. government reported in a major study run by the U.S. National Institutes of Health that the drug remdesivir shortened the time it takes for COVID-19 patients to recover by four days on average — from 15 days to 11.

“What it has proven is that a drug can block this virus,” he said. “This will be the standard of care.”

Even though a vaccine is perhaps a year or more away, experts say an effective treatment could have a profound effect on the outbreak. Stocks surged Wednesday on the news, with the Dow Jones Industrial Average gaining more than 530 points. Asian markets rode the same wave of optimism on Thursday but eurozone numbers weighed on markets in Europe.

The latest figures on Americans applying for unemployment benefits comes out Thursday, with economists estimating perhaps 1 in 6 workers, or nearly 30 million people, have lost their jobs over the past six weeks.

The U.S. unemployment rate for April is due late next week, and economists say it could range as high as 20% — a level last seen during the Depression.

Worldwide, the International Labor Organization forecast, says the pandemic has left 1.6 billion people who depend on day labor, gig jobs or other informal work in immediate danger of losing their livelihoods. That’s nearly half the global workforce of 3.3 billion. It expects 305 million full-time jobs to be wiped out in April-June.

Many economists are skeptical that the U.S. economy will bounce back quickly, noting that the virus could flare up again or consumers and employees might be too worried to return to business as usual.

“The virus has done a lot of damage to the economy and there is just so much uncertainty now,” said Mark Zandi, chief economist at Moody’s Analytics.