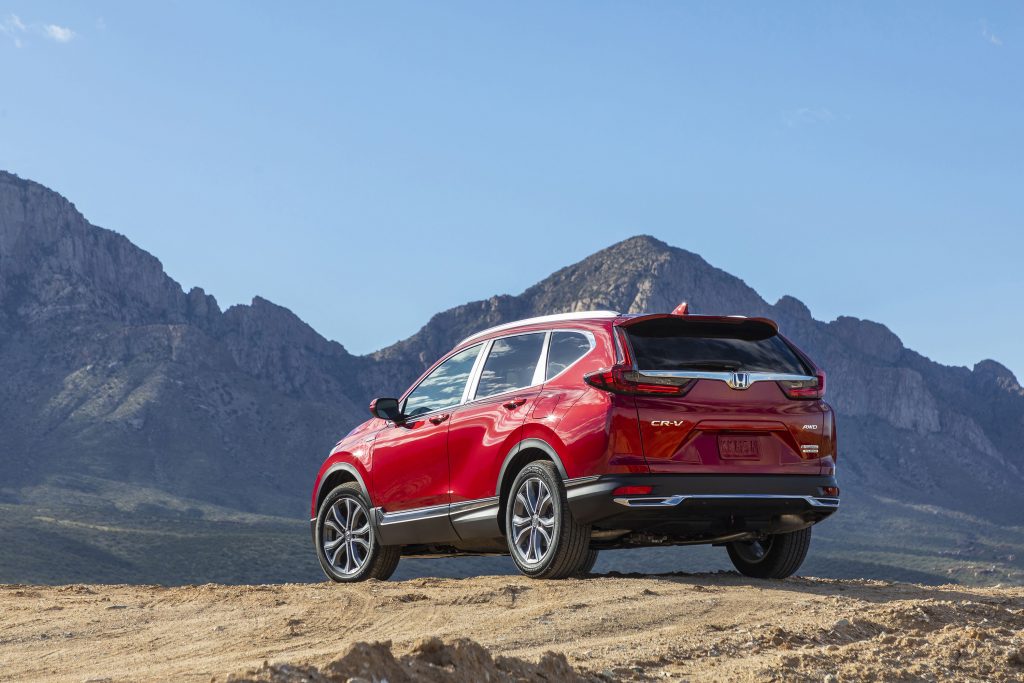 The Honda CR-V is all grown up. The unassuming little model that confused many buyers when it debuted in 1997 with less off-road or towing capacity than other SUVs is now effectively Honda’s flagship. The CR-V outsold the Accord midsize sedan by 116,601 last year, and a loaded hybrid Touring model stickers at $35,950, a cool $660 above the Accord hybrid Touring.

And people are gonna snap ’em up like the last roll of two-ply at Walmart.

The CR-V shares its hybrid system with the Accord. The EPA rates it at 40 mpg in the city, 35 on the highway and 38 combined — head-turning figures for a compact AWD SUV, but short of the 40 mpg that two key competitors, the Ford Escape and Toyota RAV4 hybrids, notched in combined driving.

Two miles a gallon looks like a lot, but the mpg difference probably amounts to less than $40 a year in fuel costs, hardly a deal breaker.

Honda doesn’t quite say “the data doesn’t matter,” as the long gone and unlamented CEO of another automaker once did in a presentation, but it comes close, touting the CR-V’s performance, quiet operation and fuel economy in real-world driving, as opposed to the lab tests used to generate EPA ratings. Honda’s wishes notwithstanding, EPA figures are the ones to use when shopping.

My skepticism notwithstanding, I averaged about 40 mpg in a day of driving on suburban and country roads outside Tucson, Arizona. I didn’t have the chance to drive in stop-and-go city driving, where the hybrid would probably have been most efficient.

Acceleration is confident, thanks to 212 total horsepower from the gasoline engine and electric motor. Peak torque of 232 pound-feet comes from the electric motor at zero to 2,000 rpm.

The engine and motor are smoothly integrated so driving the CR-V hybrid feels just like a conventional gasoline vehicle.

Combine that with smooth auto-stop at traffic lights and unobtrusive shifts to all-electric power for short distances at low speed and it’s entirely possible some drivers won’t even realize it’s a hybrid.

The CR-V hybrid is considerably more powerful than the gasoline model, which is rated at 190 hp and 179 pound-feet of torque.

The steering is firm and direct. Like the drivetrain, the brakes feel just like a normal vehicle, blending conventional braking and regeneration to charge the battery seamlessly.

A pair of steering wheel paddles allows you to increase regenerative braking and use the pedal less. They provide a noticeable difference, but fall short of the level of deceleration provided by competitors’ “one pedal” settings that allow the driver to virtually ignore the brake pedal.

The all-wheel-drive system uses a conventional mechanical connection between the engine and rear wheels, unlike the RAV4 hybrid’s self-contained electrically powered rear axle.

The AWD system shifts power from front to rear wheels smoothly and quickly in sand and other low-traction conditions.

The CR-V’s 102.9 cubic-foot passenger compartment — 105.9 if you get the base LX model, which doesn’t have a sunroof — is exceptionally roomy, with best-in-class passenger space and the lowest cargo floor for easy access to loads.

The lithium-ion battery is mounted under the rear seat, so it doesn’t reduce cargo space, which is rated at 33.2 cubic feet behind the rear seat, 68.7 with it folded flat.

The interior gets a few changes from non-hybrid models, including a push-button gear selector; gauges that include hybrid efficiency modes; relocated and lighted USB ports; and an optional wireless charging pad.

Most noteworthy is a new center console that provides storage for larger items, thanks to clever tweaks.

Blind spot and cross traffic alerts are not available on the base LX model, but standard on others.

—A blue-limned Honda badge on the grille

—Five-LED fog lights on all but the base LX model