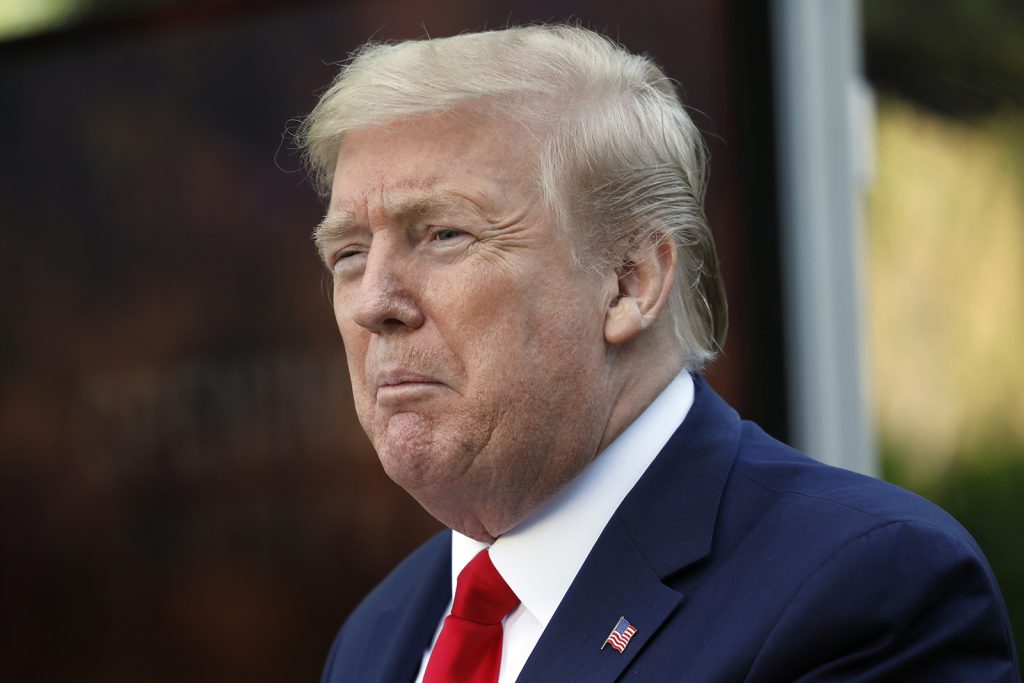 President Donald Trump on Tuesday injected the divisive politics of immigration into negotiations over the next round of coronavirus relief.

The president told reporters that he would push for “adjustments” to the distribution of future aid to states and local governments to avoid rewarding sanctuary cities, which refuse to cooperate with federal authorities to enforce immigration laws.

States, counties and cities, which won $150 billion in direct coronavirus relief last month, have been clamoring for additional aid to make up for the revenue losses they have suffered during the economic shutdown. Governors have suggested as much as $500 billion more may be needed for state governments alone.

Trump said he was willing to consider additional state and local aid, but only with conditions.

“Now if it’s COVID-related, I guess we can talk about it, but we’d want certain things also, including sanctuary city adjustments,” said Trump, who raised the issue on his own without any prompting from reporters.

“Because we have so many people in sanctuary cities, which I don’t even think are popular even by radical left folks because what’s happening is people are being protected that shouldn’t be protected and a lot of bad things are happening with sanctuary cities,” he added.

The issue is almost sure to become a major flash point in negotiations over state and local aid, which could be the most contentious piece of the next pandemic relief package.

So-called sanctuary jurisdictions are states and local governments that limit how their local police help federal immigration authorities. Several hundred counties and cities and around 10 states have implemented one of a range of policies on this front.

Because sanctuary cities have no clear legal definition, and parties on opposite sides of the partisan divide describe these jurisdictions differently, it’s difficult to pin down an exact number.

California, however, has the most far-reaching policies as far as sanctuary states go. San Francisco and New York are prominent examples of cities with such policies.

Local officials in these areas argue that cooperating with federal immigration efforts scares immigrants from coming forward and reporting crime, and that they would rather allocate scarce resources to local priorities.

For Trump, these jurisdictions have been a political target since his 2016 campaign. Mentions of sanctuary cities at press conferences, rallies and State of the Union addresses tend to rile up his supporters. He and other opponents say the sanctuary policies encourage lawlessness and make Americans unsafe, often highlighting examples of crimes allegedly committed by undocumented individuals.

The Trump administration has tried to penalize these jurisdictions by threatening to withhold federal grant money until they cooperate with Immigration and Customs Enforcement, but has so far been unsuccessful. Several lawsuits have challenged these attempts, and all but one has so far resulted in unfavorable rulings for the administration.

Republicans have made clear in recent days that any additional state and local aid would come with strings attached.

Senate Majority Leader Mitch McConnell, R-Ky., angered Democrats last week by suggesting that cash-strapped states should consider declaring bankruptcy instead of relying on federal aid. He later softened that stance, but added a new wrinkle to additional aid, saying it should be paired with liability protection for employers as the economy reopens.

“So before we start sending additional money down to states and localities, I want to make sure that we protect the people we’ve already sent assistance to, who are going to be set up for an avalanche of lawsuits if we don’t act,” McConnell said on Fox Radio’s Guy Benson show.

Democrats quickly denounced linking state aid to either a change in bankruptcy law or liability protection. Senate Minority Leader Charles E. Schumer, D-N.Y., said McConnell was engaging in “some little subterfuge” by trying to raise liability protection as a new condition of aid.

“He says we don’t want to give the aid until we make sure there’s no liability,” Schumer said of McConnell on MSNBC. “Well, does that mean that if a boss tells a worker, ‘You got to work next to somebody who has no mask’ that that worker can’t protect him or herself and the boss is immune from liability?”