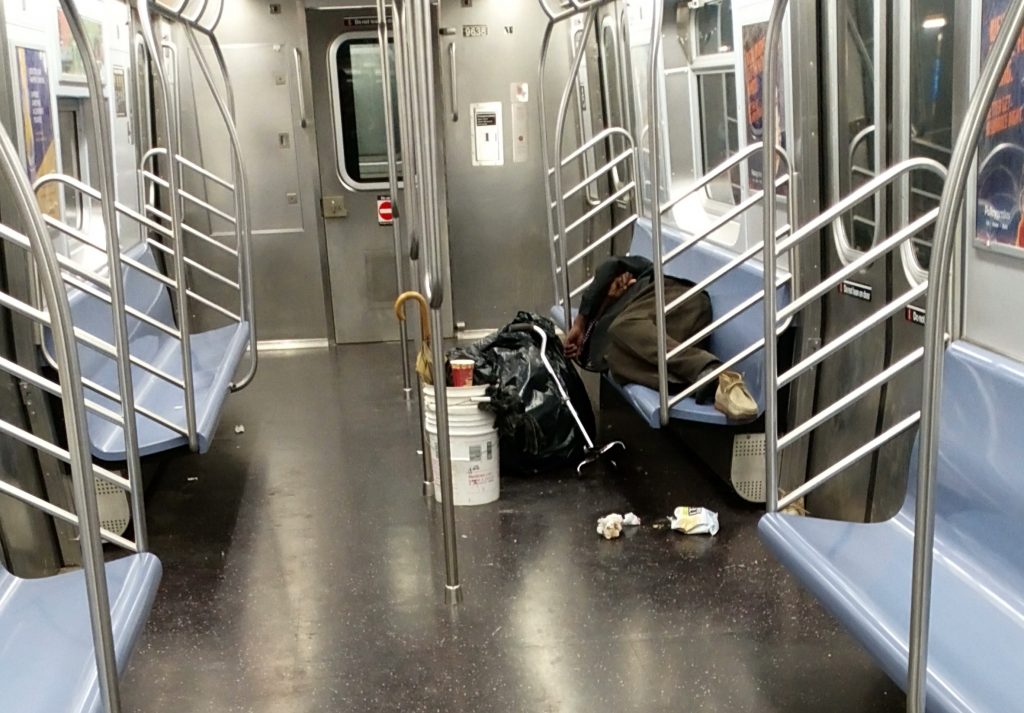 The apparent increase in homeless people occupying New York City subway cars has ignited a new dispute between Mayor Bill de Blasio and Gov. Andrew Cuomo over who’s responsible and what’s the best way to deal with the problem.

The dispute went public after de Blasio proposed overnight shutdowns of 10 end-of-line stations to “deep clean” cars and to allow police and social-service workers to coax the homeless into shelters. That drew a sharp rebuke from the governor, who said the mayor’s policy was disrespectful to essential workers who depend on the trains, and to the homeless themselves.

“That is disgusting what is happening on those subway cars,” Cuomo said Tuesday during a news briefing. “We’re concerned about homeless people, so we let them stay on the trains without protection in this epidemic of the Covid virus? No, we have to do better than that.”

The city’s comeback from its shelter-in-place lockdown depends on a well-functioning subway, which carried millions of riders a day before the pandemic. Since then, the state Metropolitan Transportation Authority has reported ridership down about 90%.

“It all depends on having a unified and successful plan to make the city confident, and that means making sure the transit system is back in a way that people feel safe and comfortable,” said Kathryn Wylde, president of the Partnership for New York City, a civic organization composed of corporate chief executives.

Sarah Feinberg, interim president of New York City Transit, which operates the system for the MTA, said the pandemic has intensified a problem that’s existed for decades.

“The MTA workforce shouldn’t have to clean up trash, personal belongings, soiled items, drug paraphernalia, excrement and bodily fluids,” Feinberg wrote in a Tuesday New York Post opinion piece. “Our customers shouldn’t have to board a car that has multiple people using it as a shelter and as a trash receptacle or toilet. And the essential front-line personnel working to keep this city safe shouldn’t have to encounter panhandling and trash or threats on their already-stressful commutes.”

De Blasio’s plan would close 10 subway terminals from midnight to 5 a.m. Shuttle buses would take riders to the next stops.

“We want to create a change where everyone gets out of the station,” de Blasio said. “Our homeless outreach workers are there to engage and get people support, take them right away.”

About 6,000 homeless people have been placed in hotels so far, and there’s room for more, de Blasio said. That leaves shelters less crowded and staffed with mental health and social-service workers, he said. He called the plan a “game changer.”

Tuesday afternoon, Feinberg said there were signs that the city was taking some responsibility, but needed to do more.

“They had NYPD officers out and social workers and outreach workers out in one station and, look, it was a huge help,” she said in a WCBS radio interview. “But what I need is for them to be in all of the end-of-line stations. So one station last night was great, but I need them in the other 40 as well.