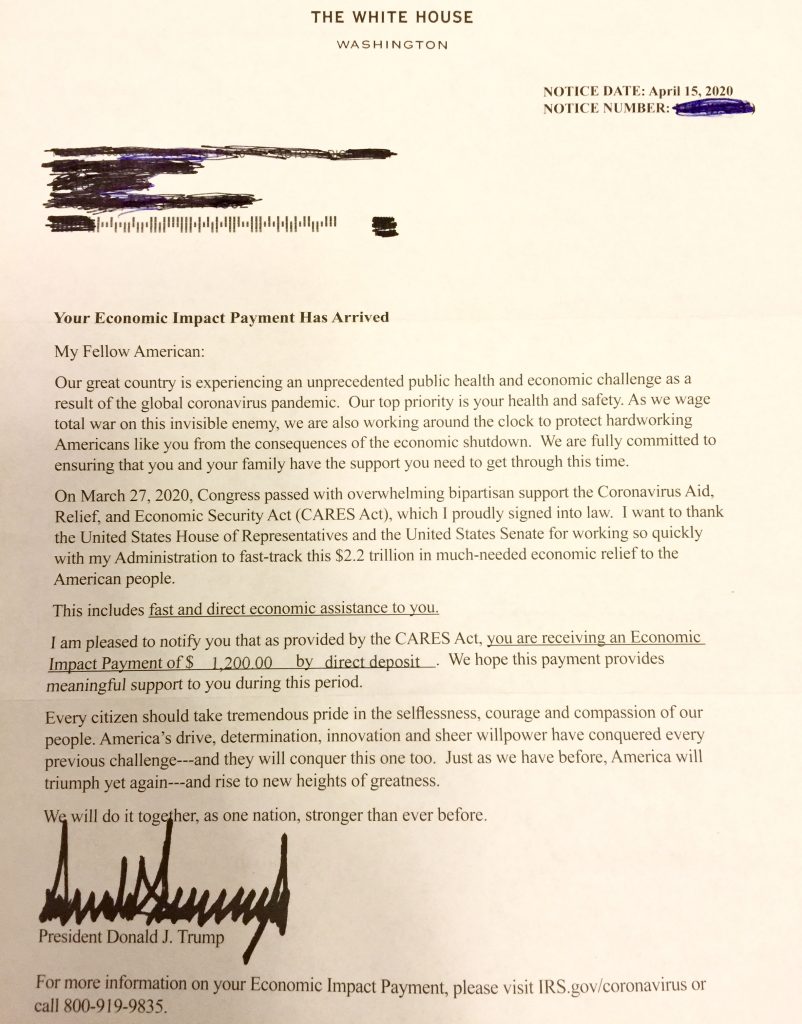 President Donald Trump pushed to have his name printed on the economic-stimulus payments the Internal Revenue Service is sending to tens of millions of Americans. Now he’s written a letter touting those checks to almost 90 million people.

The one-page letter, with one side printed in English and the other in Spanish, was required by the coronavirus economic package approved by Congress as a record of a deposit from the Treasury Department. The law does not say who should mail the letter.

If the money went to the wrong person, came in the wrong amount, or didn’t arrive at all — all scenarios that have befallen taxpayers in recent weeks – the government is giving them proof of its intent.

But in classic Trump style, the letters now arriving in mailboxes across the country carry no shortage of brio, underscoring the president’s penchant to personalize his administration’s response to the pandemic.

“My Fellow American,” begins the letter, on a copy of White House letterhead, arriving in an envelope from the Treasury Department and the Internal Revenue Service from Austin, Texas. “Our great county is experiencing an unprecedented public health and economic challenge as a result of the global coronavirus pandemic. Our top priority is your health and safety.”

“As we wage total war on this invisible enemy,” Trump continues, “we are also working around the clock to protect hardworking Americans like you from the consequences of the economic shutdown.”

Trump thanks a bipartisan Congress for fast-tracking $2.2 trillion in economic relief, announces the amount of the check the recipient is getting, and ends by waxing eloquent about America — sliding just to the edge of his famous campaign slogan, “Make America Great Again.”

“Just as we have before, America will triumph yet again — and rise to new heights of greatness,” Trump wrote.

Previous presidents have sent letters like Trump’s. President George W. Bush included his name in letters announcing economic stimulus payments in 2001, when his administration issued tax refund checks following a tax-cut package, and 2008, when it issued payments to head off the recession.

Both came from the IRS, addressed “Dear Taxpayer,” and displayed Bush’s name prominently, leading Democrats to cry foul that a government agency was stepping into politicking.

But the mention was brief, and those letters focused far more than Trump’s on how payments were determined. They included details and charts for taxpayers to figure out for themselves whether they were eligible to receive payments, and whether the payments were accurate.

Trump’s letter offers scant information about the stimulus payments. And its tone is rubbing some people the wrong way, particularly since many have had problems accessing the two stimulus portals online, have not received payments or got smaller checks than they are eligible for.

Some people who contacted The Washington Post about the letter complained that it smacked of politics, with its “The White House, Washington” letterhead.

“Worried that I had been selected for an audit, or some other misfortune, I quickly opened it,” Chris Helmsworth emailed from Portland, Oregon. “Inside was a letter from the White House, signed with Trump’s … scrawl, telling me about how he was bringing the country together! I have to wonder how much personal protective equipment could have been purchased with what it cost for Trump to send out this vanity letter.”

A Treasury Department spokeswoman said in an email: “The letter serves as Notice of the payment, and as a message from the President during these unprecedented times.”

The letter includes a line under Trump’s signature with a toll free number, 800-919-9835, to call for assistance. But right now, the “Economic Impact Payment” telephone line has no real person at the other end. It’s an automated system that tells callers to go to the IRS website, irs.gov, for more information. With a vastly reduced staff because of stay-at-home orders, the IRS phone lines have been down for weeks, unable to provide people to hear complaints or take reports of missing or incorrect stimulus payments.

The Cares Act required the administration to mail a letter to a taxpayer’s last known address 15 days after a stimulus payment is sent. The letter is supposed to indicate the method by which a payment was made (direct deposit or check, for instance), the amount of the payment and a phone number for the “appropriate point of contact” at the Internal Revenue Service to report any issue.

The law, signed into law March 27, provides a $1,200 refundable tax credit for individuals and $2,400 for joint taxpayers. Those whose adjusted gross income qualifies them to receive a stimulus payment are supposed to receive an additional $500 for every dependent child under 17.

A Treasury official said Tuesday that 89.5 million payments have been delivered so far, most of them through direct deposit, with paper checks en route now at a rate of 5 million a week for those whose bank information the IRS doesn’t have. All, by law, are supposed to receive the president’s letter within 15 days of their payment going out.