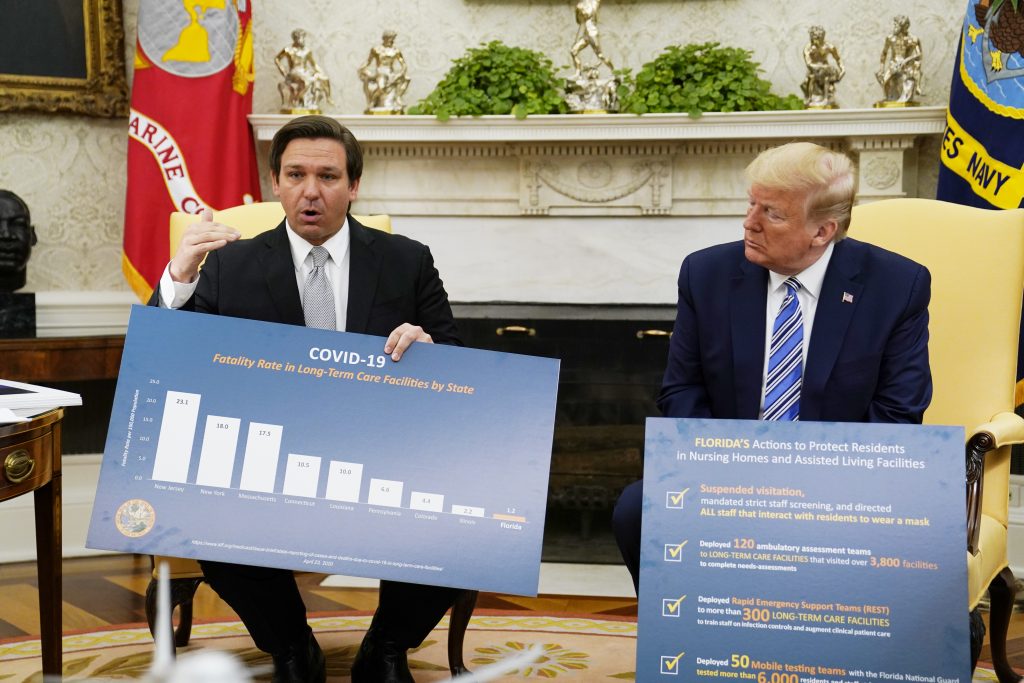 President Donald Trump said Tuesday his administration is considering requiring travelers on certain incoming international flights to undergo temperature and virus checks to help stop the spread of the coronavirus.

“We’re looking at doing it on the international flights coming out of areas that are heavily infected,” President Trump said at the White House. “We will be looking into that in the very near future.”

Trump said it has not been determined yet whether the federal government or the airlines would conduct the testing. “Maybe it’s a combination of both,” he said.

Trump’s comments came during an event showcasing a loan program designed to help small businesses weather the coronavirus pandemic, the Paycheck Protection Program. He said the Small Business Administration has processed more loans in 14 days than it has in the previous 14 years.

Earlier, the president defended his administration’s handling of the pandemic as he met with Florida Gov. Ron DeSantis and promised to help states safely begin reopening their economies.

Trump, seated next to DeSantis in the Oval Office, insisted that the United States was doing enough testing to protect Americans reentering the workforce. The administration has been sharply criticized for not overseeing widespread testing, but Trump said no amount would ever be good enough for critics in the media.

The president dismissed suggestions that the administration was slow to respond to the threat of COVID-19, including reports that it was mentioned in his daily intelligence briefing in January and February. He stressed his decision to restrict flights from China — though more than 40,000 travelers from China still made it to the U.S. afterward — and said of the decision: “Whether it was luck, talent or something else, we saved many thousands of lives.”

Florida, with a high population of older Americans vulnerable to the disease, has long been a source of concern, and DeSantis was slower to impose social distancing guidelines than other governors were. But DeSantis, a fellow Republican and close Trump ally, promoted his state’s ability to test its residents.

He also raised the idea of testing airline passengers on international flights from areas where the virus is spreading. When Trump suggested DeSantis might be “cutting off Brazil,” which is experiencing a major outbreak, the governor replied, “Not necessarily.”

Gary Kelly, chairman and CEO of Southwest, was asked about airport screening during an earnings call with analysts and reporters and said: “We are talking with the administration and members of Congress about what the protocols should be.”

He added that an industry trade group was “leading the effort to advocate for some kind of health screening at the security checkpoint … some kind of screening makes sense, and I think to get people flying again, they need to be comfortable, and I think that’s one way to provide additional comfort.”

Florida health authorities have attributed many of the state’s cases to people who arrived from other hot spots, including Europe, Latin America and the New York region. DeSantis hasn’t yet given a start date for a reopening but has said it would be “methodical, slow and data-driven.” He also has been collecting information from a task force representing industry groups and medical professionals.

Asked why he closed his state later than others did, DeSantis contrasted Florida’s “tailored” and “measured” approach with “draconian” measures in other states.

“Everyone in the media was saying Florida was going to be like New York or Italy, and that has not happened,” DeSantis said.