Business AUTO REVIEW: GMC Acadia AT4 Befuddles, From the Name to the Features
Business 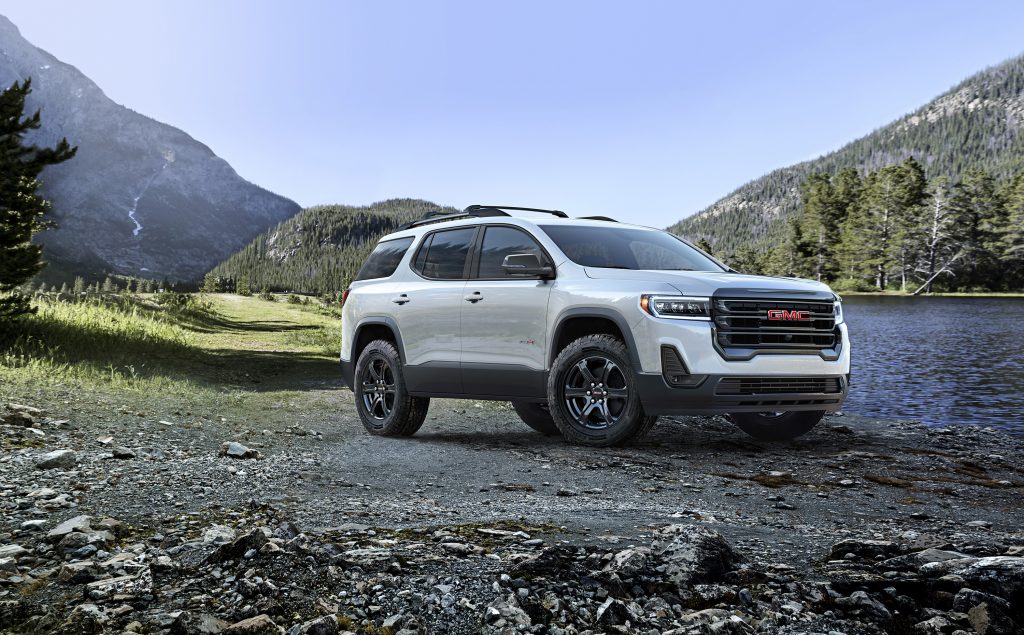 Reality: If I have to explain the acronym, that’s not a good start.

What’s new: The AT4 designation — coming across the entire GMC lineup for 2021 — struck me as automatic transmission four-cylinder. But, no, it indicates all-terrain capability, meaning better performance on mixed surfaces, thanks to a twin-clutch AWD system, all-terrain tires, and off-road mode.

The Acadia itself is also redone for 2020, with a 2.0-liter turbo four-cylinder engine available, along with a 2.5-liter four or 3.6-liter six.

Up to speed: Acadia drivers will definitely not feel held back. The 3.6-liter V-6 engine in the test vehicle produced 310 horsepower and 271 pound-foot of torque and is standard on the AT4. Car and Driver expected a 6-second 0-to-60 time.

On the road: But General Motors needs to stop making vehicles so GM-y. It wasn’t until the last day I had the Acadia that I realized what it recalls — the long-ago Sturgis Family 1998 Pontiac Transport. And this has been my quibble with GM’s midsize SUVs for a while now.

The feel of the modes leaves a lot to be desired, though. Two-wheel drive is OK for highways, but it’s really wobbly on side roads. All-wheel drive works OK anywhere except on the highway, where it’s too wobbly. (I could really feel the Acadia shimmying from side to side.)

Sport mode makes the curves nicer. The Acadia is definitely not unsporty for a large crossover, but the handling is wonky throughout.

I tend to test the stereo and not worry too much about noises from the vehicle, but several times while driving the Acadia I could hear a hum or a whine from somewhere. I wonder if trouble behind this noise also made the vehicle so touchy.

Shifty: The Acadia designers must want drivers to play Find the Transmission, like so many car builders these days. Chrysler gives you a dial; Honda a row of buttons; and Ford sometimes hides them next to the stereo.

So raspberries to GMC for slipping these under the infotainment system, inside the console phone holder/coin tray. People who collect a lot of stuff in their cars might not be well served by this setup.

There’s a way to raise and lower gears, but, eh, why bother.

The nine-speed transmission did function well, though.

Driver’s Seat: The Jet Black Kalahari Perforated Leather-Appointed Seating ($1,000) offers plenty of support but a firm ride. I suffered with lower back pain for most of the duration, which disappeared the minute I slipped into the Subaru Legacy that replaced it.

Gauges are typically GM and are clear and easy to follow.

Friends and stuff: Some Acadias come in three rows, but not the tester. Rear seat space is generous.

Cargo space is 79 cubic feet behind the first row and 41.7 behind the second. It’s a dismal 12.8 behind a third row, and fewer than 30 cubic feet means it’s going to be a tight one.

GMC says the electronic precision shift that replaces the conventional shifter frees up interior room, but the console is not exactly huge now. And occupants can’t really put much in the tray in front of the shifter buttons anymore. Sounds like a trade-off to me.

Play some tunes: The Acadia stereo follows GM’s new pattern, bringing back a left volume knob and a right tuning knob, but most functions are handled by the touchscreen. Everything functions seamlessly and doesn’t require a lot of time or attention, always a good thing.

Sound from the Bose Premium 8-speaker system ($995) was an A-, clear and pretty true to the original, but a little too much treble.

Keeping warm and cool: Dials control temperature for each side and for fan speed, while everything else uses buttons.

Seats in the Acadia test model were heated but not cooled.

Night shift: Test the Acadia at night if you have issues seeing; the headlights could make it a little difficult to see. The interior lights are quite subtle.

Fuel economy: I averaged a disappointing 18 mpg in my usual test course. Feed the Acadia whatever.

How it’s built: Consumer Reports predicts the Acadia will have a reliability rating of 3 out 5, which is down from 5 out of 5 for 2019, but matches 2018, and is higher than previous years.

In the end: If it’s serious off-roading you want, the Acadia is not for you. And double-check the seats, handling, and lights before buying as well.