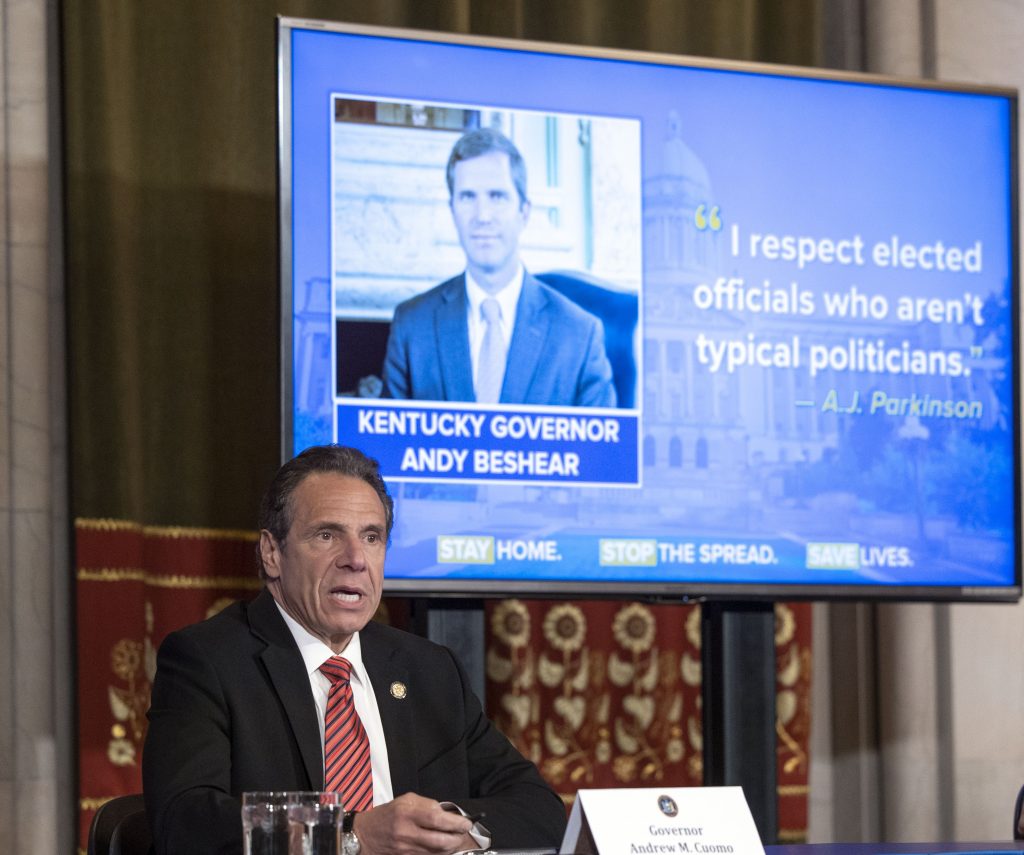 New York Gov. Andrew Cuomo has praised Kentucky’s governor for calling on Senate Majority Leader Mitch McConnell to provide federal relief to state and local governments because of the coronavirus.

At his daily virus briefing, Cuomo said Monday that Beshear “stood up” to McConnell after the senator suggested states could go bankrupt if they run into budget troubles during the pandemic. Cuomo has been critical of McConnell for offering federal bankruptcy as a solution for struggling budgets.

“Kentucky Gov. Andy Beshear stood up, said to his senior senator in the state, Mitch McConnell, that Mitch McConnell was wrong on saying he wouldn’t provide funding for state and local governments, and wrong in saying states should go bankrupt,” Cuomo said.

Beshear was asked about McConnell’s bankruptcy comments at his daily briefing on Friday. Beshear, a Democrat who won the governor’s race by 5,000 votes in November, said he and McConnell have a good relationship.

But “on this piece I disagree with him, as does every governor in the United States,” Beshear said. “This isn’t a blue or red state issue.”

Kentucky recorded three deaths and an additional 202 new coronavirus cases on Sunday, bringing the total to more than 4,000 positive cases.

Beshear said states and local governments were offered relief during the stimulus bill a decade ago, when the country was in the throes of a recession. “I hope the senator thinks about that and hears us, and ultimately helps us get (the aid) through,” Beshear said.

Cuomo, a Democrat, said it could be hard for a new governor “to stand up to a senior official and speak truth to power.”

“That is hard; it takes guts, it takes courage,” Cuomo said.

House Speaker Nancy Pelosi has said Congress’ next economic package should provide billions for financially reeling state and local governments, adding there “will not be a bill without state and local” relief.

McConnell said Monday in a statement that the Senate would reconvene on May 4. He said lawmakers should not “get distracted by pre-existing partisan wish-lists or calls to paper over decades of reckless decisions that had nothing to do with COVID-19.”