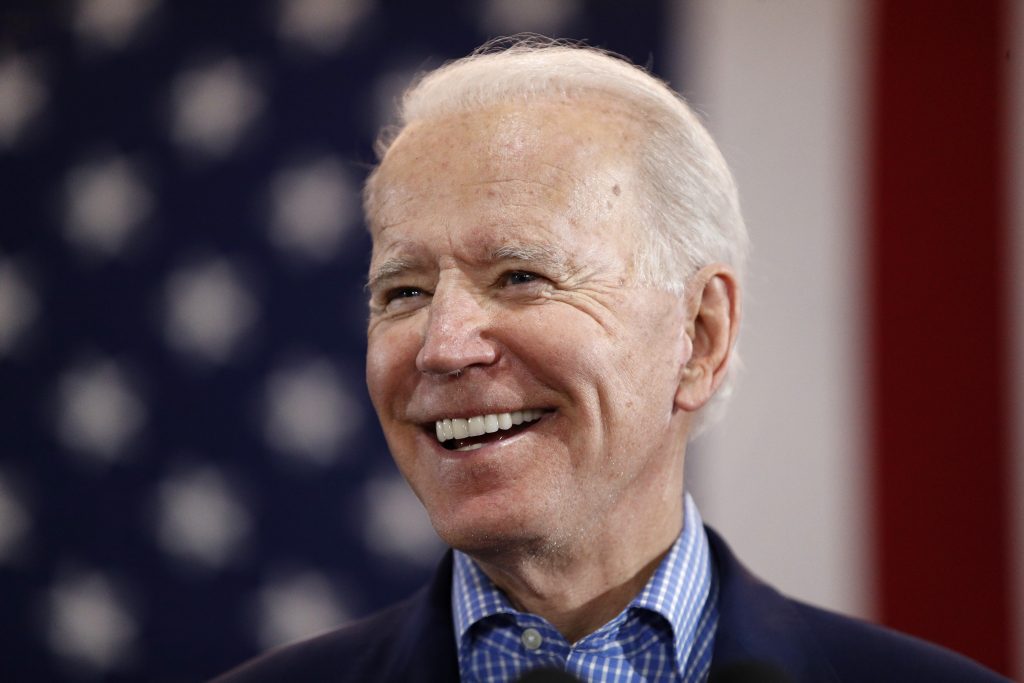 Joe Biden’s unexpectedly rapid consolidation of the Democratic presidential nomination has upended calculations in both parties about the U.S. Senate landscape, with Democrats hopeful that Biden can actively help with close races and Republicans increasingly nervous about losing their 53-47 majority.

Biden’s ascent has dented GOP plans to paint Democratic candidates as left-wing extremists, something they were eager to do had Sen. Bernie Sanders, I-Vt., emerged as the nominee. Instead, the Democrats now have a more moderate standard-bearer who is intimately familiar with the Senate, in close touch with top candidates and keenly aware of how Senate control could affect his potential presidency.

The former vice president’s emergence is part of a larger shift in prospects that has become clear in states such as Arizona, Colorado, North Carolina and even Montana and Georgia, as a surge in Democratic fundraising, along with President Donald Trump’s struggles to manage the coronavirus pandemic, have led independent analysts to upgrade Democrats’ chances.

Even in Alabama, one of the most conservative states, underdog Sen. Doug Jones, a Democrat, stands an outside chance of an upset, a fact that Jones attributes in part to Biden besting Sanders.

“Was it in fact a relief? Sure, it was a relief – for me and I think a lot of the moderate Democrats that won in 2018,” said Jones, who has known Biden for decades and spoke to him this month. “It’s always tougher to run when you’ve got somebody on the ticket that is identified as far more liberal than you are.”

Beyond the Senate’s critical role in passing legislation and confirming judges and Supreme Court justices, Biden served 36 years in the chamber, which formed him politically and shaped many of his friendships. He has repeatedly engaged in behind-the-scenes efforts to boost the party’s chances of winning the majority.

In the final sprint to the Iowa caucuses in mid-January, when Biden’s own nomination was in serious doubt, he hopped on the phone with Montana Gov. Steve Bullock to urge him to consider running for the Senate. He had a similar talk with former Colorado governor John Hickenlooper.

Bullock and Hickenlooper, both of whom ran against Biden for the presidential nomination, are now two of the Democrats’ marquee Senate prospects. Biden consulted Senate Minority Leader Charles Schumer, D-N.Y., before both conversations, according to people with knowledge of the discussions.

Just this past week, the former vice president was on the phone with his friend Sen. Christopher Coons, D-Del., taking inventory of which candidates were “looking strong” and which were in “need of some additional support,” Coons recalled.

Biden is even eager to discuss the Senate when talking to those more interested in the House, raising the issue a few days ago with Rep. Cheri Bustos, D-Ill., chair of the House Democratic campaign arm. “We talked a little bit about the Senate,” Bustos said. “He’s very optimistic about what’s ahead.”

Nonpartisan analysts and strategists in both parties agree that the Senate landscape has shifted in recent weeks, pushing Democrats to within striking distance of a takeover. The pandemic and the collapse of the economy, once President Trump’s biggest strength, are big factors, but so is Biden’s rise.

“Biden’s likely nomination was critical to Democratic chances of taking back the Senate because it keeps the battlefield large,” said Nathan Gonzales, editor and publisher of Inside Elections. “I think if Democrats had nominated Sanders, it would have limited Democratic takeover opportunities.”

Trump, too, is sharply aware of the Senate’s importance. He and Senate Majority Leader Mitch McConnell, R-Ky., spoke about the outlook in late February, according to a person with knowledge of the discussion.

Democrats must gain a net of at least three seats to win the majority if Biden is elected president, as the vice president is tasked with breaking 50-50 ties. The GOP is defending 23 Senate seats this year, including several in purple states, compared with 12 for Democrats, mostly on safely blue terrain.

The ripest Democratic pickup opportunities are in Arizona, Maine, North Carolina and Colorado. The leading Democratic challengers outraised GOP incumbents in all of these states during the first three months of the year.

Even some Republicans say Senate control will be a toss-up in November. “I think their optimism is fading a bit, because it feels like more of a jump ball,” said Dan Eberhart, an oil industry executive and GOP donor, speaking of officials in his party.

Republicans’ best chance to offset any Democratic gains is in ruby-red Alabama, where Jones is on the ballot three years after a historic upset victory over embattled Republican Roy Moore. Biden campaigned in that race for Jones, who said in an interview that he expects Biden to campaign for him again this year.

The stakes are as high as ever. If Biden defeats Trump and Democrats maintain control of the House, a Senate majority would hand them unified control of Washington for the first time in a decade. That could help them roll back Trump’s actions and possibly go further, pursuing aims such as a public health-care option.

In 2010, Democrats used unified control to pass the Affordable Care Act, the most sweeping expansion of domestic policy in decades. After 2016, Trump and the Republican Congress enacted a broad rewrite of the nation’s tax laws, along with installing two conservative justices on the Supreme Court.

Few have experienced the highs and lows of Senate control more intimately than Biden, who forged deep relationships there before becoming Barack Obama’s vice president. “He knows just what it means to be in the minority or in the majority in the Senate, and he has a sense of the consequences for our country and its future if we do not take control of the Senate,” Coons said.

During the presidential primary battle, Biden argued repeatedly that as the party’s nominee, he would boost down-ballot candidates in a way that more liberal figures – such as Sanders or Sen. Elizabeth Warren, D-Mass. – could not.

That promise is arguably now playing out. Many of the attacks Republicans lobbed at Democratic candidates involving socialism and Medicare-for-all have evaporated. The GOP has been forced to recalibrate, for example targeting Democrats by seeking to tether them to China as the coronavirus spreads, a far murkier message.

Republicans still see other opportunities to complicate matters for Democratic Senate candidates. One is Biden’s tendency to commit gaffes and verbal miscues that force fellow Democrats to answer questions about his comments.

But there is a broad sense in the GOP that the opportunities are more limited than they once seemed, when Democrats faced a fractured primary featuring two dozen candidates and the prospect of a bitter race and possibly even a divided convention.

Republican strategists said GOP candidates should now focus on the basics of their own races and tout their ability to solve problems for their home states, avoiding engagement in any Trump-Biden drama.

“I think Republicans just have to tend to their own knitting. I think at this point the presidential is going to be what it is. The ability for anybody down-ticket to impact that one way or another is very limited,” said Josh Holmes, a former chief of staff to McConnell. “In times of crisis, the best thing you can do is turn yourself into your state’s mayor in Washington.”

Vulnerable incumbents such as Sen. Martha McSally, R-Ariz., are seeking to do just that. “I spoke with @realDonaldTrump on Wednesday afternoon to request additional ventilators from the Strategic National Stockpile. Today, POTUS delivers with 100 ventilators headed to AZ,” McSally tweeted earlier this month.

If Republicans are trying to make the Senate races intensely local affairs, Democrats see new opportunities to tie them to broader political passions engulfing the country.

Many Democratic strategists believe animosity toward Trump will be the overarching factor in the election, enabling them to go after some Republicans for not standing up to the president. In Maine, Republican Sen. Susan Collins, who has long cultivated a moderate image, is facing a barrage of attacks for voting to confirm Supreme Court Justice Brett Kavanaugh.

Democrats also hope anti-Trump sentiment on the part of centrist voters will counteract any lingering antipathy toward Biden from the left of their own party. Many see a blueprint in Democrats’ 2018 House victories, which largely ran through moderate suburbs.

They are gearing up to reprise a midterm pitch that centered on health care, a message they hope will have even greater resonance due to the pandemic.

In addition, Biden’s strong appeal to African Americans, a big reason he prevailed against Sanders, could help in Southern states, Democratic officials said. They pointed to North Carolina and a pair of potentially competitive Republican Senate seats in Georgia as places where he could be helpful.

Biden has a long history of jumping into Senate races, predating his presidential run. Former Senate majority leader Harry Reid of Nevada recalled Biden’s help in 2006 when he was trying to coax then-Rep. Sherrod Brown, D-Ohio, to run for the upper chamber. “Joe was always building relationships,” Reid said.

Former senator Heidi Heitkamp, D-N.D., took Biden up on his offer to campaign for her in 2018, in a conservative state where most national Democrats were unwelcome. “He called me and said, ‘Look, you have a tough race. I’m willing to do whatever I can to help, and you just need to call me,'” said Heitkamp, who nonetheless lost.

Rep. Ben Ray Luján, D-N.M., who chaired the House Democrats’ campaign operation that year and is now a Senate candidate, said Biden was a frequent help.