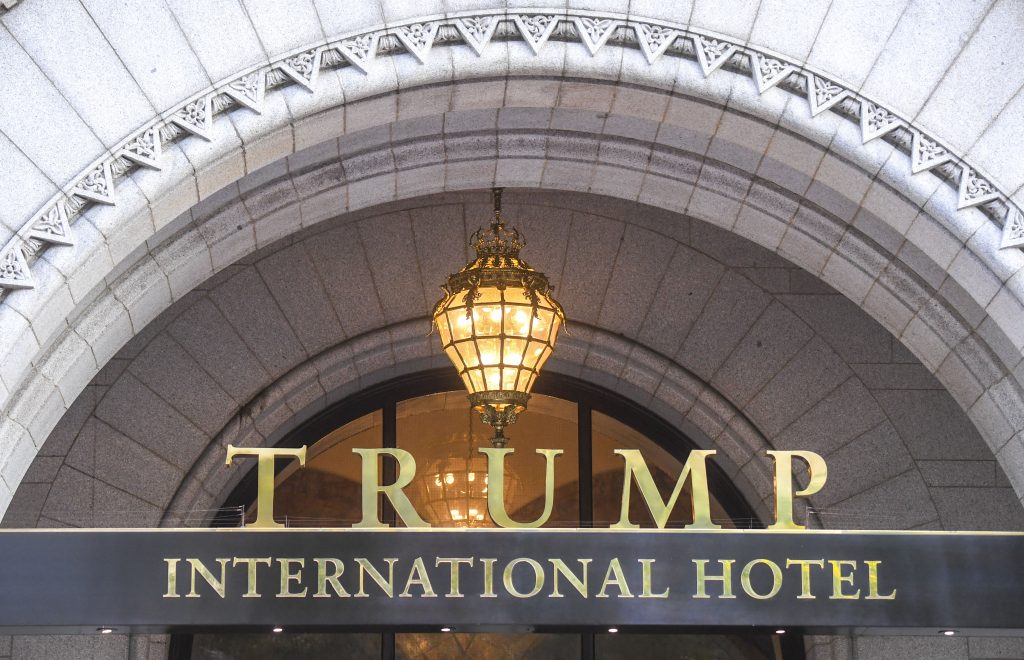 Congressional Democrats are pressing the General Services Administration for information about President Donald Trump’s D.C. hotel lease after Trump’s company said it asked the federal government to include it in any accommodations it may make for private tenants during the coronavirus shutdown.

In a letter Thursday, Sen. Chris Van Hollen, D-Md., asked GSA Administrator Emily Murphy to produce the agency’s policies governing possible changes to its lease agreement with the Trump Organization, which rents the District of Columbia hotel building from the federal agency.

The letter also requested the status of any discussions with the Trump Organization. Democratic leaders on the House Oversight Committee, Reps. Carolyn Maloney of New York and Gerald Connolly of Virginia, previously called on the GSA not to modify the lease.

The discussions carry “a huge risk for abuse of power and undue influence,” Van Hollen said in an interview. “After all this is a president who gloats about how he controls every aspect of the federal government and now you have one of his agencies having to make a decision about one of his businesses.”

The letter is the latest attempt by congressional Democrats to prevent Trump from using his administration to benefit his business, which he still owns but which his adult sons, Eric Trump and Donald Trump Jr., are running while he is in office.

The renewed oversight comes at a time when the Trump Organization, like virtually all hotel and golf companies in the country, has seen business plummet to a small fraction of what it was due to shutdowns from the pandemic, and has been looking to cut costs.

The Trump Organization also recently began conversations with its primary lender, Deutsche Bank, about whether the bank might be providing some kind of alteration or forbearance regarding the company’s loans with the bank, according to a person familiar with the discussions.

“The conversations were informal in nature” and the president’s company made no formal request for relief, said the person, speaking on the condition of anonymity to speak freely about a private contract. The New York Times previously reported the Deutsche Bank discussions.

Deutsche Bank declined to comment. In an interview earlier this week,Eric Trump said the Trump Organization is not asking to be treated any differently by its partners and lenders than other companies.

“We asked [the GSA] if you are doing something for any of your other properties,” he said. “All we are saying is don’t single us out. Treat us the same as everyone else.”

He said in a statement that the conversations with Deutsche Bank were similar in nature.

Over the past six weeks, GSA representatives have not responded to repeated inquiries about the status of the lease or payments from the Trump Organization. Officials there did not respond to a request for comment Thursday. The GSA has also repeatedly declined to share detailed information about the president’s lease with Congress.

“I am sure they are all intimidated,” Van Hollen said of GSA officials. “We have seen the president reach deep into the federal government and fire people.”

As the shutdowns from the pandemic continue to stifle travel, the Trump Organization has been looking for ways to cut costs. Unlike other large companies, the firm is prevented from applying for relief from the $2 trillion Cares Act stimulus package because of a provision barring family members of the president from benefiting.

Affiliates of the Trump Organization are permitted to apply for different federal relief: a program providing loans to small businesses harmed by coronavirus-related closures. But on Wednesday, in a conference call with the board of directors at Trump’s hotel in Chicago, the hotel’s managing director, Gabriel Constantin, said the hotel had decided not to participate in the Small Business Administration program, which requires companies to keep their employees on staff and which loans the companies them money to cover payroll for eight weeks.

Constantin told board members that the hotel would still have to pay taxes and benefits and allow vacation to accrue, and that it would ultimately cost more to take the loan than it would to continue the bare-bones operation they are running today, according to an account of the meeting.

The Chicago hotel laid off 70 staff members, according to a filing with the state of Illinois, adding to the more than 2,800 employees the company has laid off or furloughed nationally. Most of the company’s 24 hotels and clubs are closed. Some Trump properties are operating with reduced staffs and still accepting golfers or hotel guests.

The latest Trump Organization property to report layoffs is the Trump National Golf Club Jupiter in South Florida, which furloughed 92 employees, according to a filing posted this week by the Florida Department of Economic Opportunity.