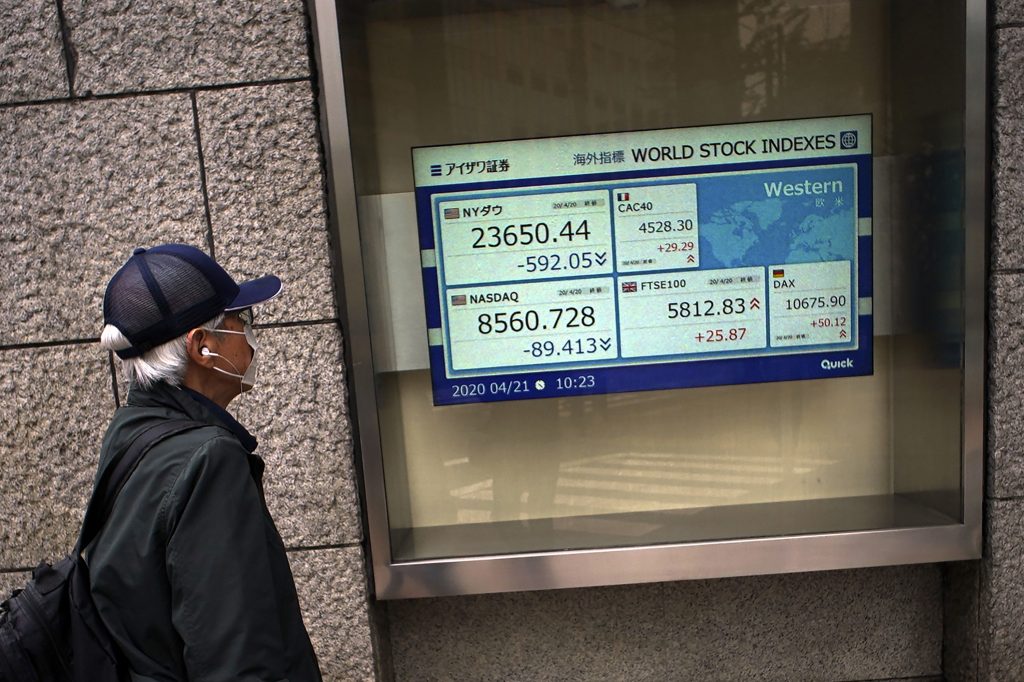 Asian shares skidded on Tuesday after U.S. oil futures plunged below zero with storage for crude nearly full as demand collapses due to the pandemic.

In a stunning development, the cost to have a barrel of U.S. crude delivered in May plummeted to negative $37.63. It was at roughly $60 at the start of the year.

Traders are still paying more than $20 for a barrel of U.S. oil to be delivered in June, which analysts consider to be closer to the “true” price of oil. Crude to be delivered next month, meanwhile, faces a stark problem: traders are running out of places to keep it, as factories, automobiles and airplanes sit idled around the world.

“We could merely be in the eye of the hurricane as the epicenters of its rage remain centered around demand devastation and crude oil oversupply,” Stephen Innes of AxiCorp. said in a commentary.

“At a minimum, oil prices will be the last asset class to recover from lockdown. End transport demand will only occur in the final stages of reopening when border crossing is allowed, and travel restrictions get lifted,” he said.

Tanks at a key energy hub in Oklahoma could hit their limits within three weeks, according to Chris Midgley, head of analytics at S&P Global Platts. So traders are willing to pay others to take that oil for delivery in May off their hands, so long as they also handle figuring out where to keep it.

“Almost by definition, crude oil has never fallen more than 100%, which is what happened today,” said Dave Ernsberger, global head of pricing and market insight at S&P Global Platts.

“I don’t think any of us can really believe what we saw today,” he said. “This kind of rewrites the economics of oil trading.”

Few traders are buying and selling U.S. oil to be delivered in May. When trading contracts for it expire on Tuesday, the earliest delivery they’ll be able to buy is for June.

Brent crude, the international standard, fell nearly 9% on Monday to $25.57 per barrel.

On Tuesday, U.S. crude for June delivery rose 99 cents to $21.42 per barrel in electronic trading on the New York Mercantile Exchange. Brent crude, the standard for international oil pricing, dropped 19 cents to $25.38.

“The historic drop in WTI prices is an indication of the downward pressure which many other crude oil grades could face, given the oversupply situation,” Sushant Gupta of Wood Mackenzie said in a report.

On the bright side, given the very low prices right now, “It also provides an opportunity for large consuming nations in Asia such as China and India to expedite filling up their petroleum reserves.”

In a sign of continued caution in the market, Treasury yields remained extremely low. The yield on the 10-year Treasury slipped to 0.60% from 0.62% late Monday.

Monday’s plunge in oil sent energy stocks in the S&P 500 to a 3.7% loss, the latest in a dismal 2020 that has caused their prices to nearly halve.

Halliburton reported a stronger first quarter profit than expected but said the pandemic has created so much turmoil in the industry that it “cannot reasonably estimate” how long the hit to demand will last.

Gains from companies that are winners in the new stay-at-home economy helped limit the market’s losses. Netflix jumped 3.4% to set another record as people while away the hours and days shut in at home. Amazon added 0.8%.

Stocks have been on a general upward swing recently, buoyed by promises of massive aid for the economy and markets by the Federal Reserve and U.S. government.

More recently, countries around the world have tentatively eased up on business-shutdown restrictions meant to slow the spread of the virus, which has killed more than 170,000 people and infected more than 2.4 million.

Health experts warn the pandemic is far from over and new flareups could ignite if governments allow a premature rush to ”normal” life. Many analysts also say some of the recent rally for stocks is based on overly optimistic expectations for a fast economic rebound once shutdowns end.

“There’s still uncertainty surrounding the reopening of the economy,” said Julian Emanuel, chief equity and derivatives strategist at BTIG. “Come fall, are we going to be back on airplanes? Are we going to go out and eat?”