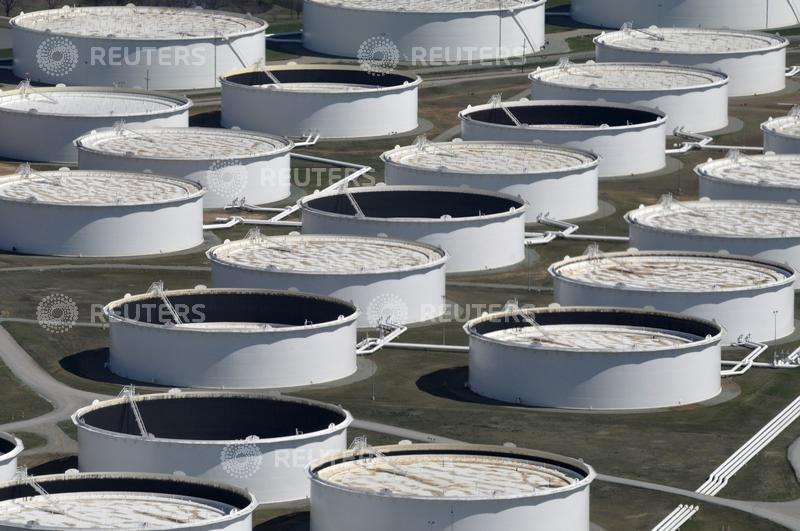 President Donald Trump said Tuesday he has ordered his administration to come up with a plan to provide federal assistance to the oil and gas industry in the United States, which has been staggered by the consequences of the coronavirus pandemic.

A huge drop in demand for crude oil because of the global economic slowdown has led to a glut that is close to filling all available storage capacity, and that has driven prices below what most oil-producing American companies can sustain.

It reached the point Monday where futures contracts for May delivery of West Texas Intermediate were trading in negative figures, which translates into big losses for those left holding the contracts. Ominously, the price for June contracts fell precipitously by about 70% at one point Tuesday.

Until now the American oil industry has been divided on whether to seek federal help, with the larger companies and the American Petroleum Institute arguing against it.

But Energy Secretary Dan Brouillette said on Bloomberg TV on Tuesday that the United States would be taking “very aggressive” steps to assist the oil business and might use funds from the Fed’s Main Street lending program.

That program is designed to support “small and midsized businesses that were in good financial standing” before the coronavirus crisis, according to a Fed statement. It is to provide four-year loans to companies with fewer than 10,000 employees or with revenue of less than $2.5 billion.

Over the past four years, the oil sector has built up an extremely large amount of debt – more than $200 billion among production and pipeline companies – and a significant number of firms were thought to be in precarious shape before the pandemic hit.

The bad news for oil prices continued Tuesday. Contracts for June delivery of West Texas Intermediate fell from about $20 a barrel to around $7, then recovered half of that. Brent oil, the global benchmark grade, fell about 25%.

Oil companies operating in the Permian Basin, in west Texas and Oklahoma, in the Eagle Ford region of southwest Texas, and in the Bakken formation, primarily in North Dakota, have drastically cut back capital spending and have begun to shut in some of their producing wells.

Thousands in the industry have been laid off, but not to the extent that job losses have hit other sectors, especially hotels and food services. In North Dakota, the second week of April saw 1,250 unemployment claims in oil and gas and related fields, in contrast to 10,504 claims in all sectors of the economy. In Louisiana, 1,148 people who had been working in oil and gas filed unemployment claims; 79,653 claims were filed from all businesses.

In Texas, the numbers have been similar.

But Monday’s plunge in prices suggests that the pain in the industry could be about to get a lot worse, and on Tuesday morning Trump tweeted: “We will never let the great U.S. Oil & Gas Industry down. I have instructed the Secretary of Energy and Secretary of the Treasury to formulate a plan which will make funds available so that these very important companies and jobs will be secured long into the future!”

“If this plan ends up using some of the $500 billion Congress allocated to the Treasury Department in the CARES Act, the Congressional Oversight Commission has oversight authority and should scrutinize the plan very carefully,” tweeted Bharat Ramamurti, named by Senate Minority Leader Chuck Schumer, D-N.Y., to the bailout oversight panel.

In the argument over federal assistance, opponents have said that the free market should be allowed to find its own way. Smaller producers have asked for help. Some have also petitioned Texas and Oklahoma to impose quotas on oil production to hold down the glut, arguing that there is no real free market in petroleum when state-owned companies in Saudi Arabia, Russia and elsewhere are such important players.

A Greenpeace climate campaigner, Jack Shapiro, argued Tuesday that Trump has been hoping since March to help the oil industry, even as Republicans tried to obscure the potential benefits that companies could obtain through the Cares Act.

“Trump’s tweet today lays out in the open what his administration has been hinting at for weeks: He is ready to use federal funds – including taxpayer money – to bail out fossil fuel companies hit by a combination of market shocks, their own risky business decisions, and low demand due to COVID-19,” Shapiro said.

There is more trouble on the horizon for American oil producers – nine supertankers, chartered by Saudi Arabia, bringing an estimated 40 million barrels of crude to ports in the Gulf of Mexico. They are four to six weeks away from their destination, and some politicians and business leaders have called on Trump to embargo the oil or hit it with steep tariffs under anti-dumping rules.

“It’s outrageous what the Saudis are trying to do,” said John Kilduff, of an investment firm called Again Capital. “They’re going in for the kill. It’s purely predatory.”

He said the delivery of so much oil, most likely to a Saudi-owned refinery in Port Arthur, Texas, would be “ruinous” to American producers.

At his daily news conference Monday, Trump was asked about requests by some Republican lawmakers to stop incoming Saudi shipments under his executive authority and replied, “Well, I’ll look at it.”

Trump said he had heard the proposal immediately before the news briefing. “We certainly have plenty of oil, so I’ll take a look at it,” he said.

Saudi Arabia and Russia launched a price war in early March, which contributed mightily to the oil glut, as each tried to force the other to give in and lower production. The Saudi budget is predicated on oil at $80 a barrel, about twice Russia’s more conservative estimate. But the actual cost of pumping and shipping oil is less in both countries, so a prolonged dip in prices could be handled. Neither, though, expected the price to fall as far as it did, and on April 12 they called off the war and agreed to cut output.

Trump said he had brokered the deal in a bid to preserve American oil jobs. But the price kept falling.

America’s privately owned companies, which face a break-even price averaging around $48 to $50 a barrel, haven’t until now had the luxury of a major national budget to support them. Trump’s new plan may change that.