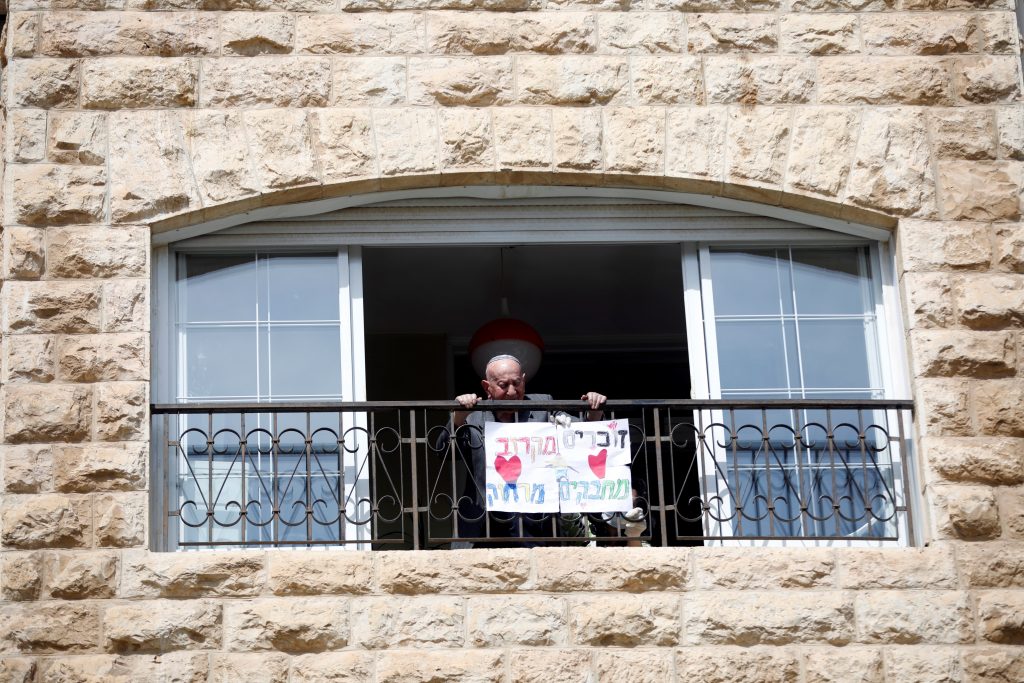 Elias Feinzilberg, a 102-year-old Holocaust survivor, had to commemorate Israel’s annual memorial day for the six million Jewish dead on Tuesday separated from his family because of the coronavirus lockdown.

From his third-floor Yerushalayim home, he blew kisses to his daughter, grandchildren and great-grandchildren who stood in the street below to be with him, at a safe distance, as a siren sounded across Israel to honor those who perished.

“It pains me that I cannot be with my family, with my friends,” said Feinzilberg from his window.

Below, his family members, including five of his 19 great-grandchildren, brandished a sign that read “Remembering close-by, embracing from afar”, part of a nationwide campaign to show solidarity with Israel’s roughly 190,000 Holocaust survivors at this time of coronavirus lockdown and enforced separation.

As the siren sounded, his family bowed their heads and then waved to Feinzilberg.

The average age of the survivors today is 84, putting them in the highest risk group for COVID-19, the respiratory disease caused by the coronavirus.

Israel, which has about nine million people, has reported 13,833 confirmed COVID-19 cases to date, including 181 deaths.

Feinzilberg, born in Poland in 1917, was imprisoned with his family in the Lodz ghetto after the Nazi German invasion at the start of World War Two in 1939. His father perished there and his mother and sisters were murdered at the Chelmno death camp.

Feinzilberg was packed aboard a cattle train and sent to Auschwitz-Birkenau, where more than a million Jews were murdered. He survived months of forced labor before being marched by the Nazis from one concentration camp to another in the final weeks of the war.

He and his wife moved to Israel in 1969 and opened a shoe store. She died in 2008 and Feinzilberg now has a full-time care worker living with him.

The Holocaust survivors, like other elderly Israelis, are confined to their homes under the country’s partial lockdown and find themselves far from their usual network of support.

“Loneliness is one of their greatest sources of distress,” said Offir Ettinger, a spokesman for Israel’s Authority for Holocaust Survivors’ Rights, which provides thousands of survivors with regular support through dedicated NGOs.

“Every Holocaust Day we see an increase in survivors turning to us for help, but this year, because of the coronavirus isolation, it’s different,” said Ettinger.

“Even a mere word like ‘curfew’ can bring back painful memories for some,” he added, because of its associations with draconian wartime restrictions in the ghettos and camps.

Therapy sessions, led by social workers and psychologists, have been increased since the outbreak, said Ettinger, and are being conducted by phone and video.

“(The coronavirus) is nothing compared with what he’s been through,” she said. “The most difficult part for him is knowing that his family are okay, but he has a lot of patience, he is very optimistic. He’s a great inspiration to us.”