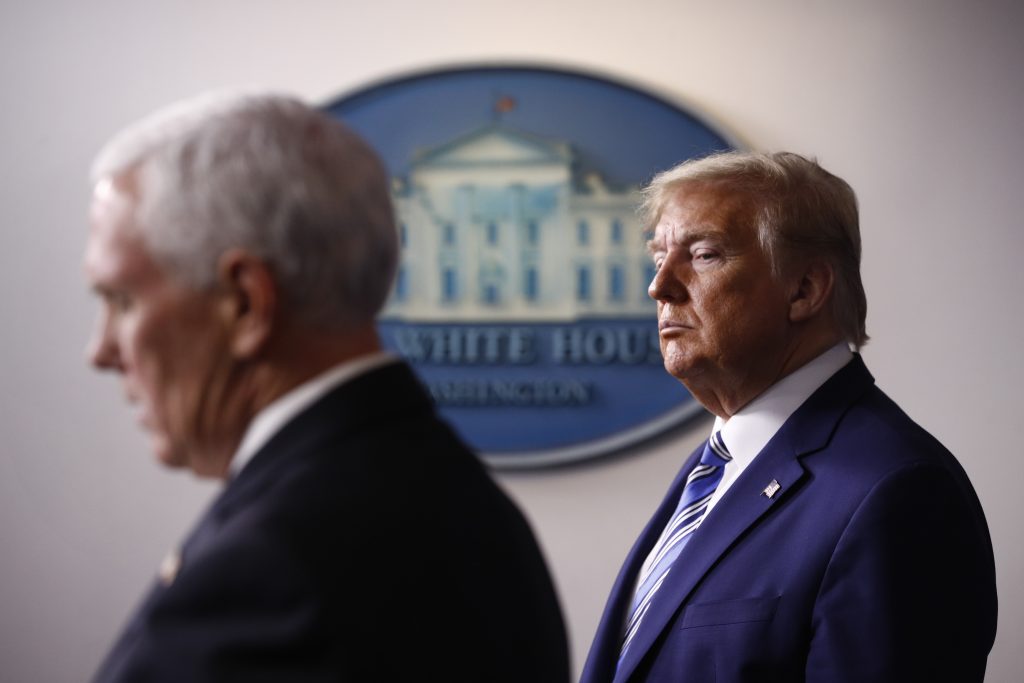 President Donald Trump accused Democrats on Monday of playing “a very dangerous political game” by insisting there is a shortage of tests for the coronavirus. But Democratic Kansas Gov. Laura Kelly, expressing the frustration of many state leaders, said the federal response has simply not been “good enough.”

Pence sought to soften the Trump administration’s message amid growing clamor from governors of both parties for a national testing strategy to help secure in-demand supplies like testing swabs and chemical reagents. Trump said Sunday that he could use the Defense Production Act to compel one company to manufacture swabs.

“When it comes to testing, we’re here to help,” Pence told governors during a videoconference from the headquarters of the Federal Emergency Management Agency. The Associated Press obtained audio of the call.

Pence said the administration sent an email to officials in each state on Monday detailing current testing capacity by state. But Maryland’s Republican Gov. Larry Hogan said much of the unused lab machinery listed for his state by the administration was in federal labs that the state does not have access to. Pence agreed to open up federal labs to help states.

In Kansas, officials have said they would like to do 15,500 additional tests to sample the population to determine the prevalence of the coronavirus. Kansas has among the lowest testing rates of any state, about half of the national rate.

“That’s not good enough, and it really is not good enough if we’re going to be able to start to open our economy. We cannot do that safely without the tests in place,” Gov. Kelly said.

She said part of the problem has been caused by how FEMA has gone about distributing the testing material and other supplies.

In the past, she said the federal government typically has had FEMA act as a single buyer of materials, which are then distributed to the states, which inventory it and send it to local agencies. She said during the pandemic FEMA has been distributing roughly half of its supplies that way and half directly to counties or individual hospitals.

She said the result is that the state does not have a good handle on what’s being sent and where. And with staffing thin, it must spend crucial time validating information from the federal government about what testing and personal protective equipment supplies it is receiving.

As Pence spoke with the governors, Trump took to Twitter with a more combative tone, complaining that the “radical left” and “Do Nothing Democrats” were playing politics with their complaints about a lack of tests.

The president in recent days has repeatedly compared governors’ concerns about a lack of screening capacity to earlier complaints that the states did not have enough ventilators to keep up with the federal government’s projections of individuals who would become hospitalized during the virus outbreak.

“Now they scream ….’Testing, Testing, Testing,’ again playing a very dangerous political game,” Trump tweeted. “States, not the Federal Government, should be doing the Testing – But we will work with the Governors and get it done. This is easy compared to the fast production of thousands of complex Ventilators!”

Public health experts say the country needs to dramatically increase its testing infrastructure if it is going to safely roll back restrictions and reopen businesses without risking a major spike in infections that would negate weeks of social distancing and economic strife.

Dr. Anthony Fauci, the nation’s top infectious diseases expert, told ABC Monday, that the country is currently running about 1.5 million to 2 million tests per week. But, “we really need to get up to, at least, you know, maybe two times that, three times that.”

Administration officials have insisted that the U.S. currently has enough testing capacity to safely implement “Phase One” of a plan they released last week to begin a slow return to normalcy. And they have argued that states could be running twice as many tests as they are now if only they were using all the equipment they already have access to.

Separately, Acting Homeland Security Secretary Chad Wolf announced Monday that the U.S., Mexico, and Canada have agreed to extend restrictions for nonessential travel across their shared borders for an additional 30 days, one sign of a recognition by the federal government that limitations need to continue for some time.

Trump on Sunday complained during his daily coronavirus task force briefing that states were unaware of equipment they already have in hand.

But governors of both parties have been complaining for weeks that they can’t ramp up testing without federal assistance, especially when it comes to accessing supplies.

Hogan told CNN Sunday.that testing was “probably the number one problem in America, and has been from the beginning of this crisis.”

“To try to push this off to say that the governors have plenty of testing, and they should just get to work on testing, somehow we aren’t doing our job, is just absolutely false,” he said.

Wyoming Gov. Mark Gordon, another Republican, on Friday called on the federal government to take a larger role to stop states from competing against once another for supplies.

In recent days, protesters have taken to the streets in some states, flouting their governors’ stay-at-home orders and social distancing regulations as they demand an end to restrictions.

Fauci told ABC that “if you jump the gun and go into a situation where you have a big spike, you’re going to set yourself back. It’s going to backfire. That’s the problem.”