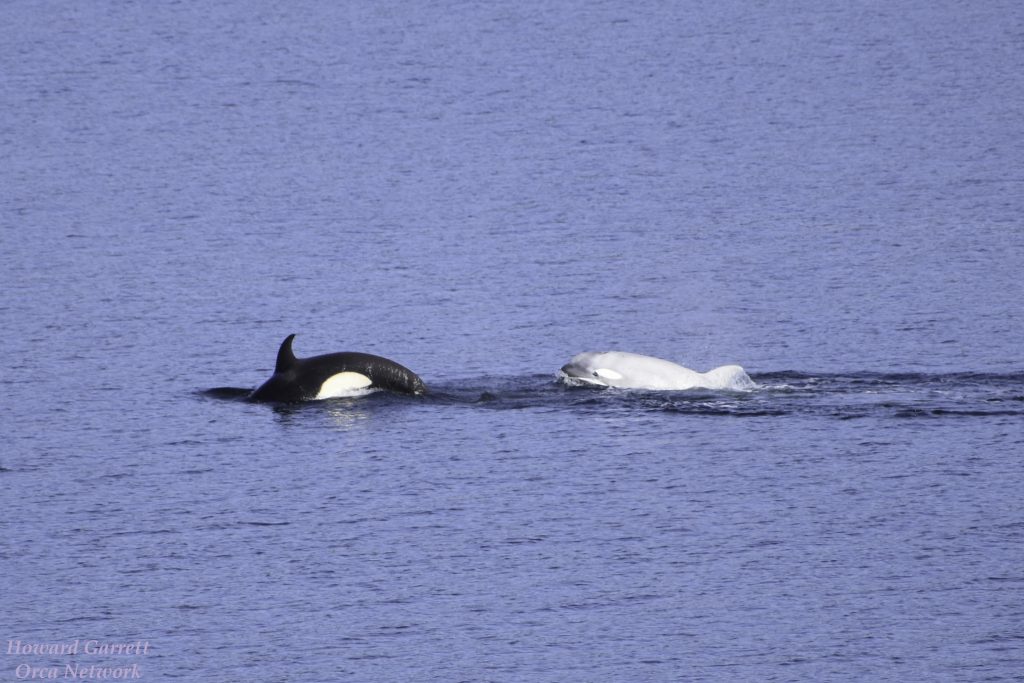 An orca pale in color as a winter moon has been wowing onlookers all over Puget Sound.

Not truly an albino, as social media has dubbed it, the orca is gray, rather than the typically deep, dashing orca black. But the whale is a thriller nonetheless, aglow through the green waters of Puget Sound.

The whale is a male and a member of the transient orca ecotype. Meat eaters, rather than fish eaters, transient orcas — not really whales at all but the world’s largest dolphins — are seen from Alaska to California and all over Puget Sound, hunting seals, sea lions and other marine mammals.

The gray whale is typical in every way but its color, said Howard Garrett of Orca Network.

“He stands right out,” said Garrett, who photographed the whale recently. “I don’t know that there is anything different about him or his family. He seems to be the right size for his age, and traveling with them, perfectly normal behavior. But he sure glows really bright.”

The gray transient whale is a member of the T46Bs, a family of transient orcas that includes T46 B1B, the gray whale. He is nicknamed Tl’uk, a Coast Salish word meaning moon.

Garrett spotted the whale April 7 at Holmes Harbor on Whidbey Island, along with other people gathered on a dock. Adding to the thrill, the whales were very close by.

“They are powerful, graceful, beautiful beings and to see them right below your feet!” Garrett said.

Transient orca populations are healthy. Because of the federal ban on marine mammal hunting since 1972, transients are feasting on seals and other plentiful marine mammals, including Pacific white-sided dolphins and even gray whale calves. Transient orcas will team up to take down a really big target, such as a sea lion. They will often hunt close to shore, since that is where their prey is found, lounging on rocks.

Unlike the transient orcas, southern resident orca whales, the salmon-eating whales that frequent Puget Sound, are fighting extinction. Southern resident orcas face a combination of threats, including pollution, boat and ship noise and disturbance that makes it harder for them to hunt, and lack of chinook salmon, their preferred prey.

Tl’uk’s family is rarely seen in local waters. Usually the family is seen north of the San Juan Islands. But beginning in April, the whales made their first documented trip down to Admiralty Inlet, spending four days in Saratoga Passage between Penn Cove and Holmes Harbor. Then the family was seen in the deep south of Puget Sound, in Case and Henderson Inlets, Garrett said.

The gray whale is less than 2 years old. He is only the second such whale known to have been seen in the Salish Sea, the transboundary waters between the U.S. and Canada, including Puget Sound. The first was Chimo, a whale captured back when hunts were still allowed on orca whales to supply the aquarium trade.

“It is great to see that guy, just amazing,” Garrett said of Tl’uk, who does appear white in the dark green of the water. “There is a certain mystical quality.”