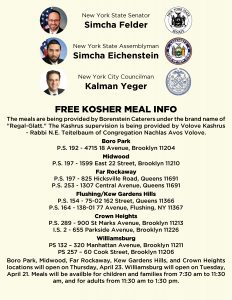 After the city closed schools in mid-March, schools still distributed two daily pickup meals for its students. The city Education Department subsequently expanded the program, first to three daily meals and then to include adults, and with halal options, but not kosher.

With unemployment at record highs and many businesses and families struggling financially, the meals became a lifeline for many New Yorkers, but excluded the hundreds of thousands who keep kosher.

Jewish organizations and elected officials appealed for weeks to the city, and on Monday, the Education Department said it would open ten “Grab & Go” kosher locations in Brooklyn and Queens.

Rabbi David Niederman, President of the UJO of Williamsburg and North Brooklyn, said Monday he is pleased that the Department “will finally fulfill its stated mission ‘to making three free meals available daily for any New Yorker’… literally everyone.”

“Pandemics don’t discriminate between religious and secular students,” said Maury Litwack, executive director of Teach NYS and Teach Coalition. “Every child has the right to three healthy meals per day in order to thrive.”

The meals are catered by Borenstein Caterers, under the hechsher of the OU and Volove Kashrus – Rabbi N.E. Teitelbaum of Congregation Nachlas Aron Volove.

The kosher food distribution will begin at the two Williamsburg locations on Tuesday, and at the other eight locations on Thursday.

People of any age can pick up three daily meals at once, with no registration or ID required. Parents and guardians may pick up meals for their children.

“After weeks of urging the Mayor’s office and [Food Czar Kathryn] Garcia to implement kosher ‘Grab & Go’ meals, I am happy that they finally heard our call,” said Councilman Chaim Deutsch. “There is no reason that kosher-observant New Yorkers should have had to wait weeks longer than the rest of the City to be allowed equal access to our most basic need – food.”

Assemblyman Simcha Eichenstein also applauded Monday’s announcement, which he said would ensure that “out-of-work and under-employed adults and families continue to have food to eat during this time of crisis.”