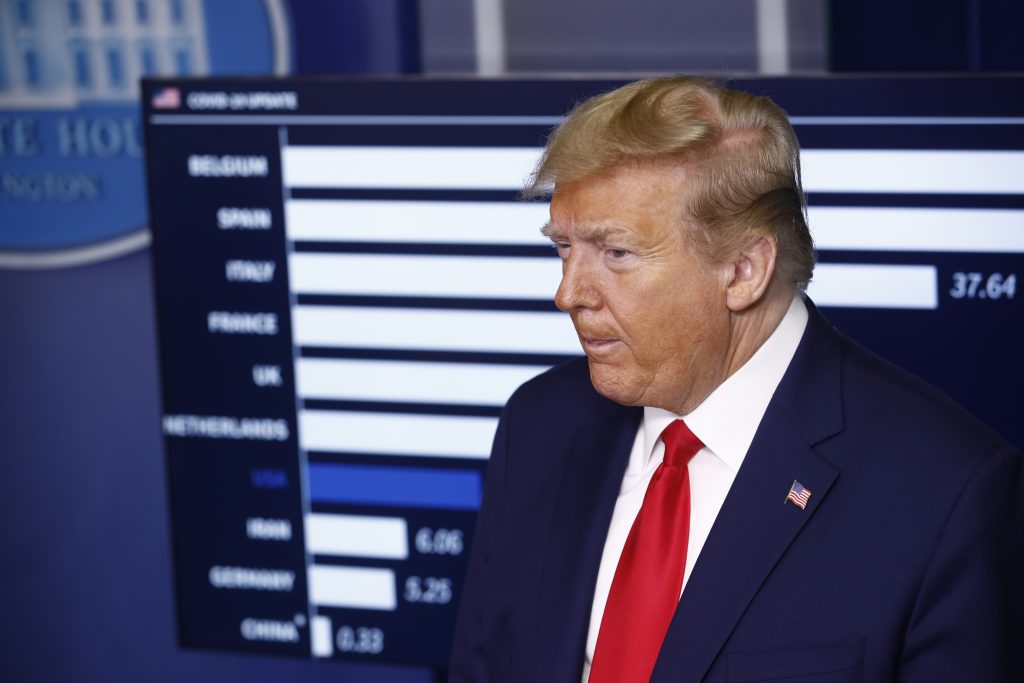 President Donald Trump signaled a possible compromise in the deadlock over additional aid for a staggered U.S. economy as the two top congressional Democrats and the administration pushed negotiations into the weekend.

Trump’s blessing for aid to hospitals removes one sticking point in talks among House Speaker Nancy Pelosi, Senate Democratic leader Chuck Schumer, Treasury Secretary Steven Mnuchin and their staffs on replenishing the tapped-out Paycheck Protection Program for small businesses. They have been discussing providing $75 billion for beleaguered medical facilities, according to a Democratic aide.

“Hospitals have been decimated by this,” Trump said when asked about the negotiations Friday at a White House briefing. “I’m with that all the way, if they want to add hospitals.”

House GOP leader Kevin McCarthy said earlier Friday he also could accept the hospital aid in a deal, a day after saying Republicans shouldn’t offer Democrats a “fig leaf” of a compromise until they agree to give the small business program, which ran out of money on Thursday, an infusion of $250 billion.

The shift in the GOP stance comes as some Democratic lawmakers facing reelection in swing districts, who’ve been targeted for pressure by Republicans, are backing away from their leaders’ brinkmanship strategy on the aid.

There is still some way to go for a deal. McCarthy remains opposed the Democrats’ proposal to provide $150 billion in assistance for state and local governments in the package under discussion, according to an aide. Senate Majority Leader Mitch McConnell also hasn’t weighed in publicly on the negotiations, though he’s unlikely to oppose a deal signed off by the White House.

The dispute has left many small businesses, which have been particularly hard hit by state-mandated stay-at-home orders, unable to apply for loans and financing through the Small Business Administration.

As they have throughout the standoff, Schumer and Pelosi on Friday were signaling optimism.

“We can get this all done hopefully very, very soon,” he said on MSNBC, in words echoed by Pelosi Friday night in a separate MSNBC appearance. Schumer said the aim was to “do a lot more than just renewing one program of small business, which we should do. We want to do that.”

In the meantime, Democrats have faced an onslaught of attacks by Republicans seeking to pin the blame on them for delaying help to small businesses at a time when a record number of workers are being thrown out of jobs.

Trump assailed Democrats on Twitter: “Today people started losing their jobs because of Crazy Nancy Pelosi, Cryin’ Chuck Schumer, and the Radical Left, Do Nothing Democrats, who should immediately come back to Washington and approve legislation to help families in America. End your ENDLESS VACATION!”

“Lamb’s absent leadership has let this vital aid program expire and left PA-17 small businesses in a disastrous position. Lamb should be ashamed of himself,” NRCC spokesman Michael McAdams wrote in a press release Friday.

Although Pelosi has managed to keep her fellow Democrats in line during previous confrontations with Republicans, there were signs of nervousness in the ranks, particularly among those facing tough re-election races in November.

Rep. Kendra Horn of Oklahoma, who won a Republican-held seat in 2018 and is one of the most vulnerable Democratic incumbents in 2020, said the small business aid shouldn’t become a “political football.”

“The bottom line is we cannot let this program go without funding and we have to fix the problems,” Horn said in an interview.

“I am prepared to return to the Capitol to vote for a clean appropriations supplemental bill to replenish this funding and give our small businesses the resources they need,’ Luria said in a statement Friday.

Horn said that while state and local governments as well as hospitals will desperately need funding shortly, they are not out of money this week. She said congressional leaders should focus on renewing PPP and adjusting it to make it easier for self-employed and microbusinesses to apply, leaving other needs to be dealt with in the coming weeks.

The inability to meet in person has hampered Congress’s ability to strike a deal. In past spending standoffs, Pelosi’s first move would be to craft a House bill, pass it and then enter into talks with Senate Republicans and the administration. With the Covid-19 epidemic in full bloom, the House is not planning to reconvene before May 4.

While lawmakers can be called back for a vote before then, congressional leaders have been aiming for a deal that could be approved by unanimous consent. But that is difficult to achieve.

In the current standoff, Democrats last week objected to McConnell’s request for consent to simply add $250 billion to the small business aid program.

Instead of a House-passed alternative bill, Democrats then put forward their vision for a compromise package as a Senate amendment from Maryland lawmakers Chris Van Hollen and Ben Cardin and sought unanimous agreement on it. That was easily blocked by Republicans.

During last year’s standoff over the raising the nation’s debt ceiling, McConnell pushed House Democrats to negotiate with Mnuchin directly. That commenced a pattern where Pelosi and Mnuchin became the lead negotiators on spending with McConnell influencing the talks from afar. This lack of direct communication between congressional leaders is also seen as slowing down a deal.